The Parque Nacional de Doñana is one of Europe's most important wetland reserves and a major site for migratory birds.We based ourselves at El Rocio, camping La Aldea.

We arrived in mid May, which is too late for the main migrations but the area is still teeming with resident birdlife.

The area was originally a hunting ground and as the area is too poor to maintain any sizeable human settlements, it became a haven for wildlife and is one of the last refuges of the European Lynx but you would need a minor miracle to spot one.

Access to the park is strictly controlled and the only way to visit the inner areas is by officially guided day tours but if you are interested in birds, there is much to see from the margins of the park.

The campsite has excellent facilities, motor home service point, restaurant, swimming pool and small shop, excellent reception.Our receptions in Spain have been first class but the young lady here excelled herself. Where is it that I have read that it takes  fewer muscles to smile than frown. The only negative is  that shade is a little limited.

Tip Avoid this campsite in late May/early June, when the town has its traditional romerio, when unbelievably something like a million people descend on the town and it also seems like as many horses as well. If you could get in you will find that campsite fees will rise tenfold.

As you would expect, this festival is based on religion and is centred on the statue of the virgin in the church, the Iglesia de Nuestra Senora, which dominates the main square.The statue  is believed to have been the basis of numerous miracles, performed since the thirteenth century. The statue is taken out of the church and forms the basis of a procession whereby people clamour to touch it. 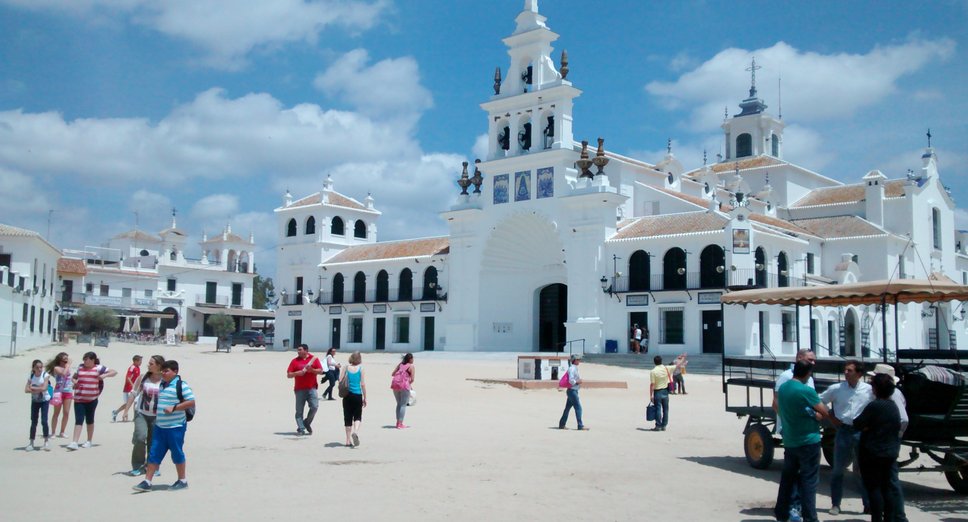 The town is also unusual in that the main streets are made of sand and with the many timbered buildings and horse hitching posts, gives the impression of a wild west town. In our visit in Mid May there were few people around and it was difficult to envisage the town heaving with people and horses. 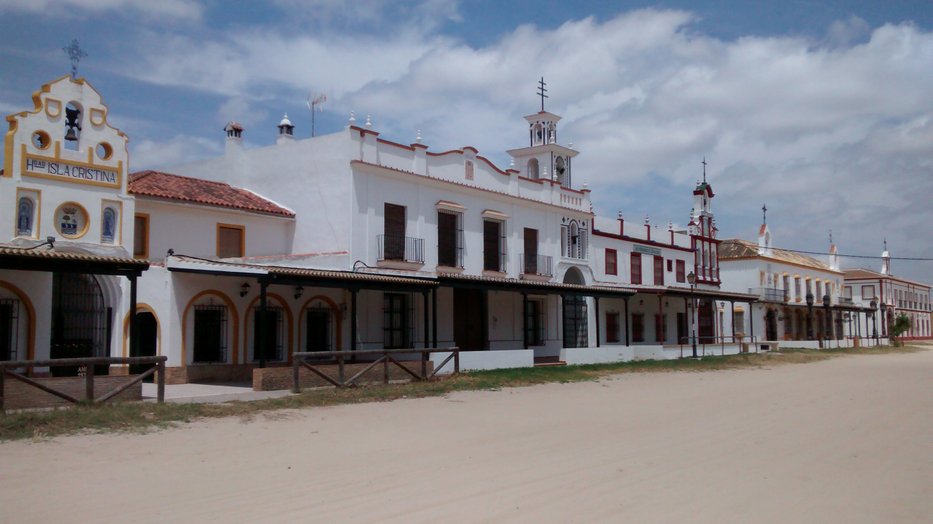 You will also see in the town, named houses which are those of the brotherhoods or hermandades who make the pilgrimage, many still using traditional oxen carts and on horseback.

Apparently there are 90 or so of these brotherhoods and their members,friends and families, and their horses, eat and sleep here during the pilgrimage weekend. People bring mattresses and doss down anywhere they can. It is a real party atmosphere with religion not too far away with open-air masses but also horse races and competitions between the hermandades.

These brotherhoods also stay at their houses at weekends throughout the year creating the family party atmosphere which the Spanish are so adept.You can experience the same at many campsites at the weekends, where families congregate and just enjoy themselves, across all generations.

The town borders on to the marshland which is superb for bird watching, with glossy ibis, spoonbills and greater flamingoes numerous.. There is also a bird watching centre at the far end of the promenade and as previously mentioned you will see as much as you would want from here alone. I would also add that it is extremely beautiful. 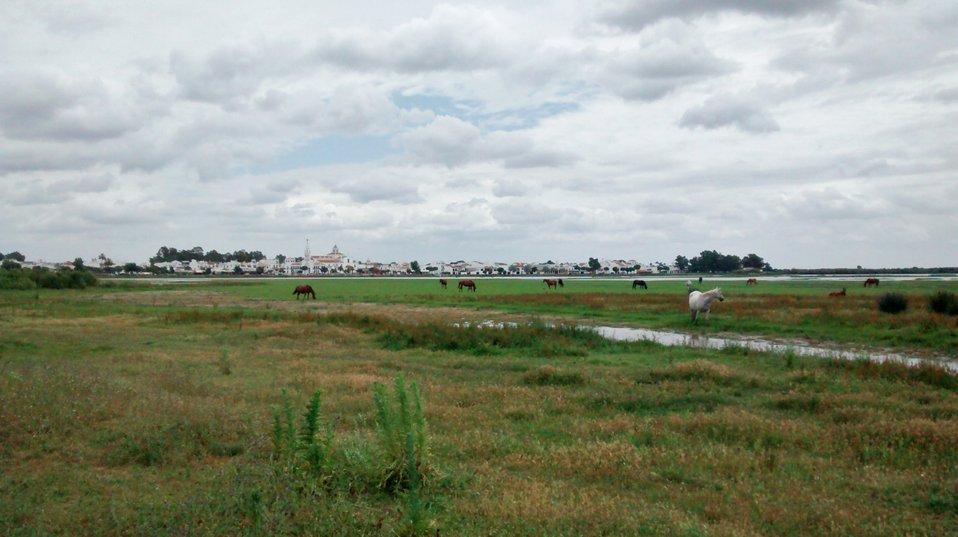 If   you want to wander further afield, there is a great cycle ride, through part of the park to the Palacio del Acebron,(pictured below) which is an old hunting lodge and now a very informative free museum of the traditional ways of life in the park. There is also a short walk from here. 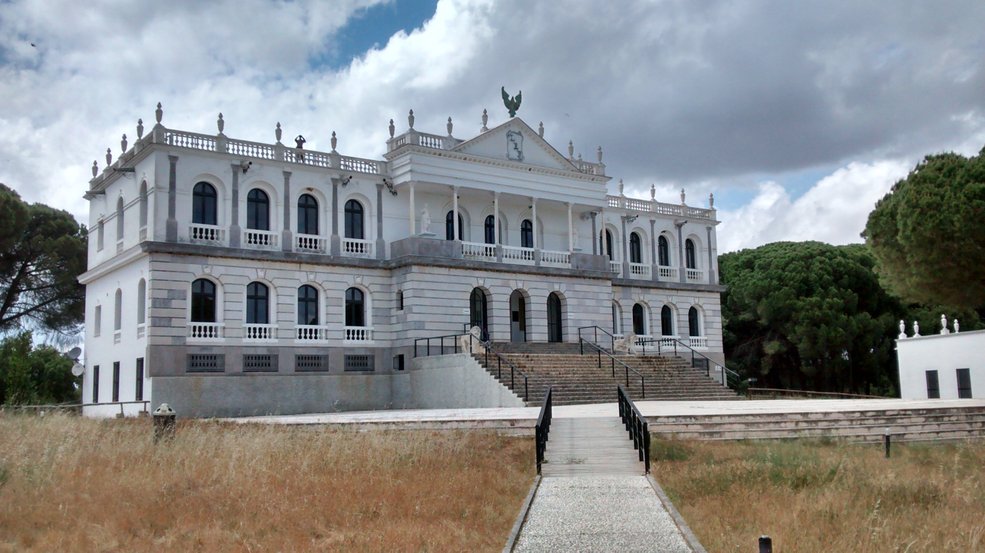 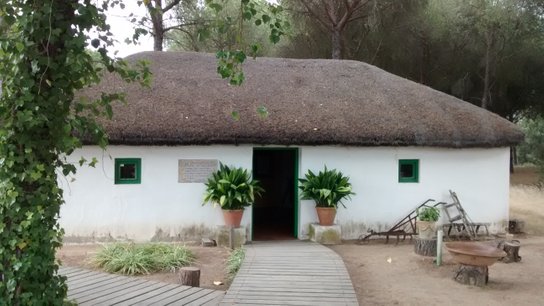 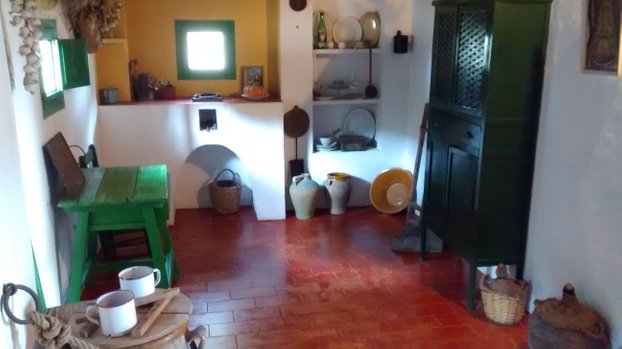 At the entrance to this cycle ride is another house, La  Rocina which has a traditional house in the grounds and also a superb walk which should take about 1.5 to 2  hours which gives you a good feel for the park. La Rocina is within easy walking distance of the campsite.

A slightly longer cycle ride is to the coast and though this is on the main road, it is not unpleasant. The only thing you have to be aware of is the wind, which can make it hard going but you will fly back on the return trip.The coast is the Costa de la Luz and it is not called the windy coast for no reason.