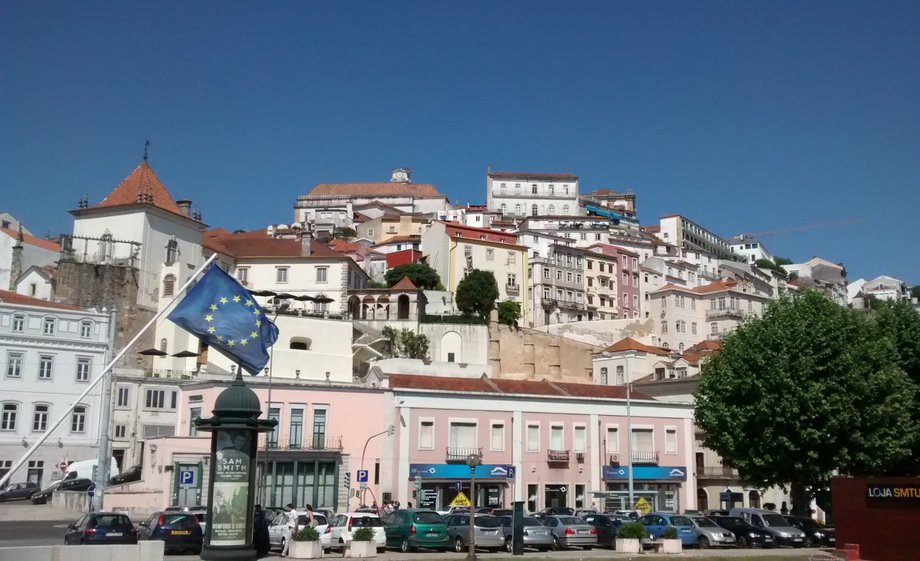 Highlights are the cathedral with its cloisters and the university, the latter which you can enter for 9 euros with an extra euro to climb the tower with great views over the town. Everyone says, leave the visit to the library to the end  as a piece de resistance as everything else does not quite compare.

The cathedral visit will cost a couple of euros which includes a visit to the 13th century cloisters. 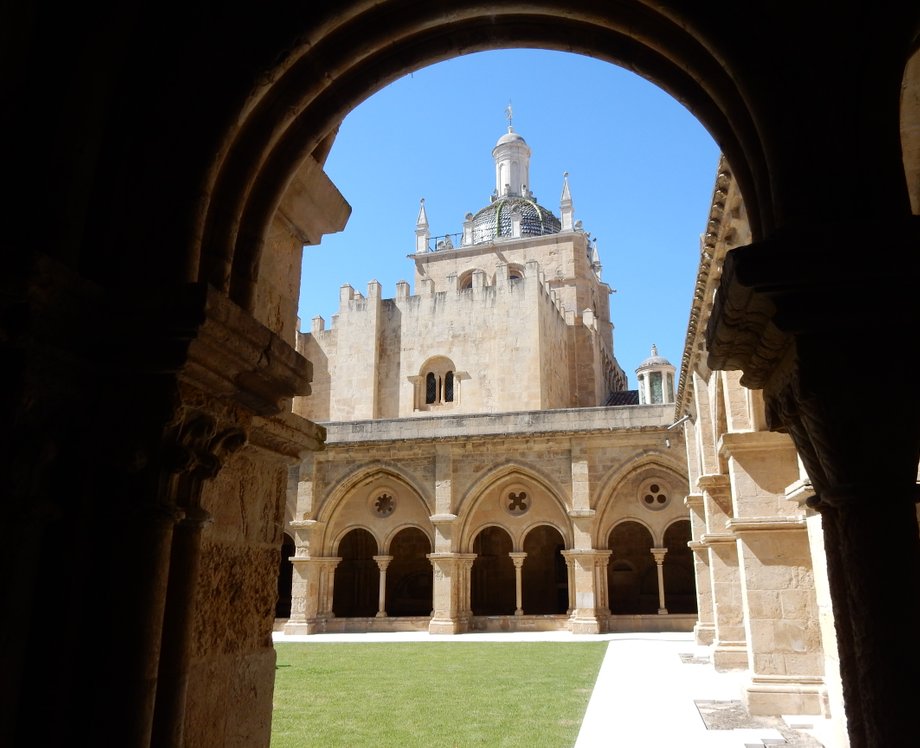 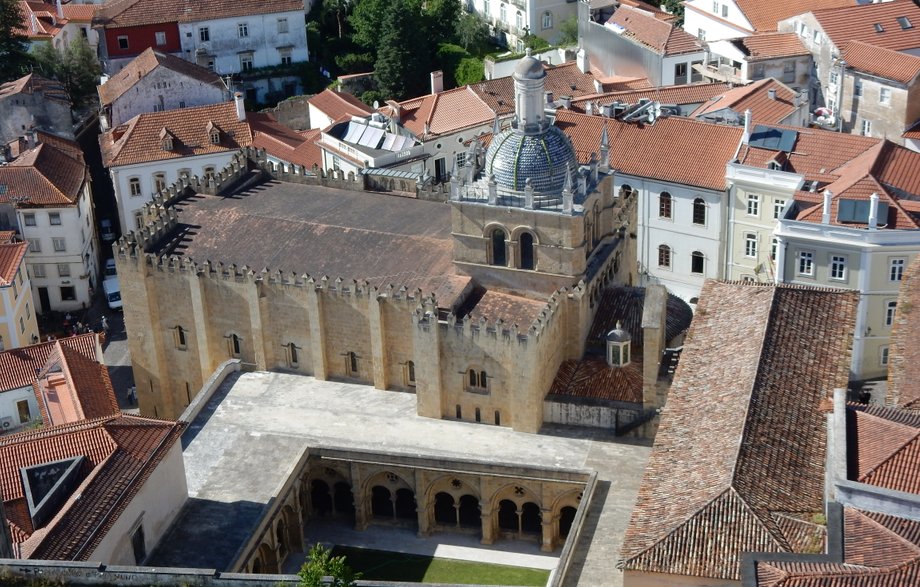 The cathedral and cloisters from the top of the university buildings 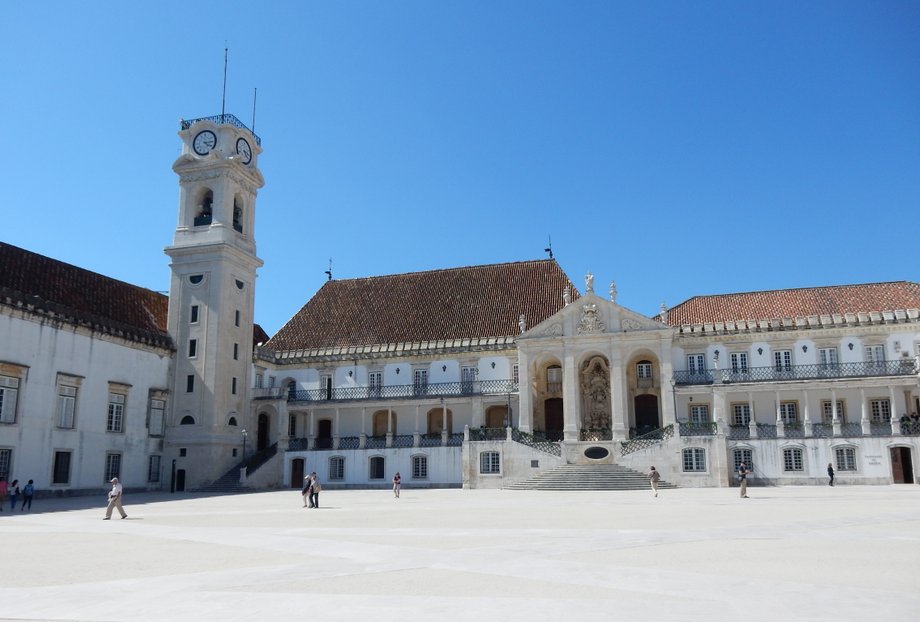 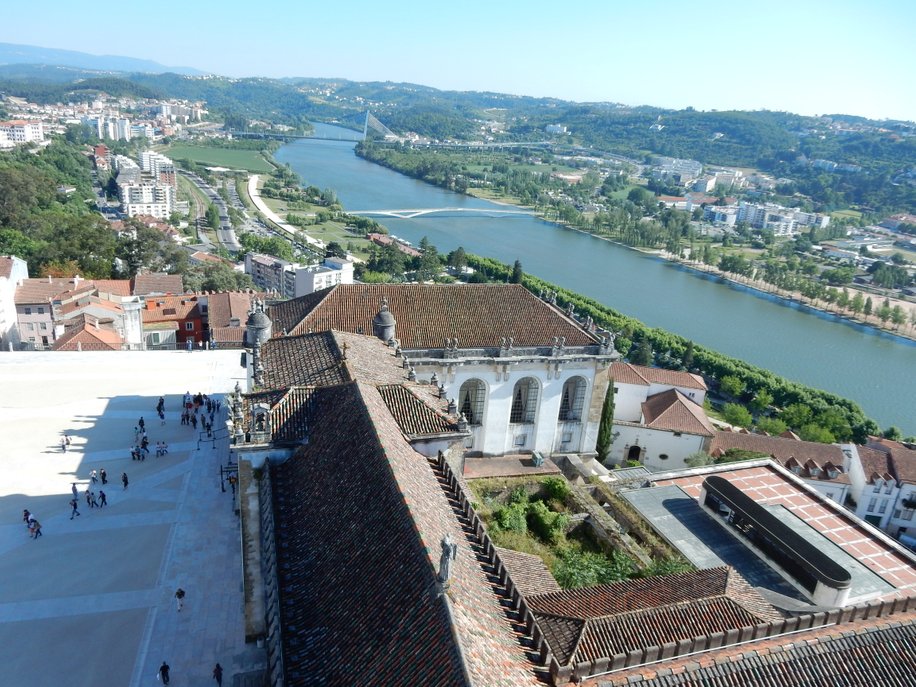 University buildings with the tower

There is a superb café, Café Santa Cruz, which is in the Praca 8 de Maio and though it is tempting to sit on the terrace and watch the world go by, it is not until you go in that you really appreciate the atmosphere and splendour of this superb building.

There are  plenty of other historic buildings to keep your interest and Coimbra has its own aqueduct but no visit to the town would be complete without a promenade along the river. There is a superb fish restaurant, A  Portuguesa. on the banks of the river which offers superb seafood at reasonable prices with impeccable service and  with a great setting by the river .

To find the restaurant, you continue left from the Ponte Santa Clara, opposite the bus station, towards the pedestrian bridge.

Coimbra on the banks of the River Mondego, was our next stop on our motor home tour of Northern Portugal and it  is dominated by its university which was established in the late 13th century and is the oldest in the Portuguese speaking world.

We based ourselves at the Pargue Campismo Municipal de Coimbra, which is about 4km out of town but a bus no 38 stops right outside of the site(The campsite provides a timetable) and offers a very cheap transit into town. The buses do not run very late but taxis offer an affordable alternative for coming back.

The return bus trip  was quite amusing, as you would expect the bus to depart from the bus station with all the other buses, which in fact it does but it continues its journey, before making the return trip to the campsite. So we duly queued up for the number 38, to be politely told that it departs for the Campismo on the other side of the bridge at Portagem Parque. We crossed the road and waited for 20 minutes for the bus to arrive with the same driver before we embarked for the return. Even he had to see the funny side of it.

We have heard mixed reviews from this ‘Camping  Cheque’ site but we could not fault it, from its very welcoming reception to the clean sanitary facilities, with lashings of hot water. We could not find a motor home service point at first but there appears to be facilities along the access road that will do the trick. In May there was loads of room.

There is a supermarket within a few hundred metres from the campsite entrance.

Coimbra is one of those medieval towns where it is just fun to wander through the narrow streets and alley ways but inevitably you will end up climbing as it is evident as you approach the town, that this is a hilltop site.