I must confess I have a bit of a love affair with the Brecon Beacons, it stems from nostalgia, as it was one of the first wild areas  that I camped and hiked on when I was a kid of 16.

Nowadays I do it in a bit more luxury and use my motorhome and on this trip stayed at the superb Pencelli Castle Campsite.

A short walk from the site and you come to the canal, which surely is one of the most picturesque canals in the country, as it follows the Usk valley and in many places in the park you enjoy scenic views of the river, either in the valley below or as it crosses the river in acqueducts.

The canal was built between 1797 and 1812 to link Brecon with Pontypool and Newport and the Severn estuary, primarily to transport the heavy stone and lime and in many places there are evidence of tramways, which brought the material to the canal for onward transportation.

One of the most interesting facts is that there are only a handful of  locks, as this is a superb example of a contour hugging canal. The canal is quite narrow. The canal fell into disuse in the 1930's, as did many of the canals in the UK and was not reopened until the 70's and is now primarily used for leisure.

This about a 10 mile round trip and we prefer to cycle it as our first trip when we arrive. You can, however, walk it, either as a round trip or get a bus for one leg of the journey. There is a limited bus service, No 43 to Brecon and the site has details.

Virtually opposite the campsite there is a small road, take this and go downhill until you meet the canal, you need to cross the canal and turn left.

It is also an important market town and cattle markets are regularly held.

There is also a cathedral to visit and a castle of Norman origin, though little remains of the town's ancient walls .

There is a very pleasant walk along the river Usk.

There are plenty of places to eat and drink, to suit all tastes and a good selection of shops.

If you ever arrive in early August Brecon hosts a jazz festival.

Brecon Wharfe- the end of the canal. 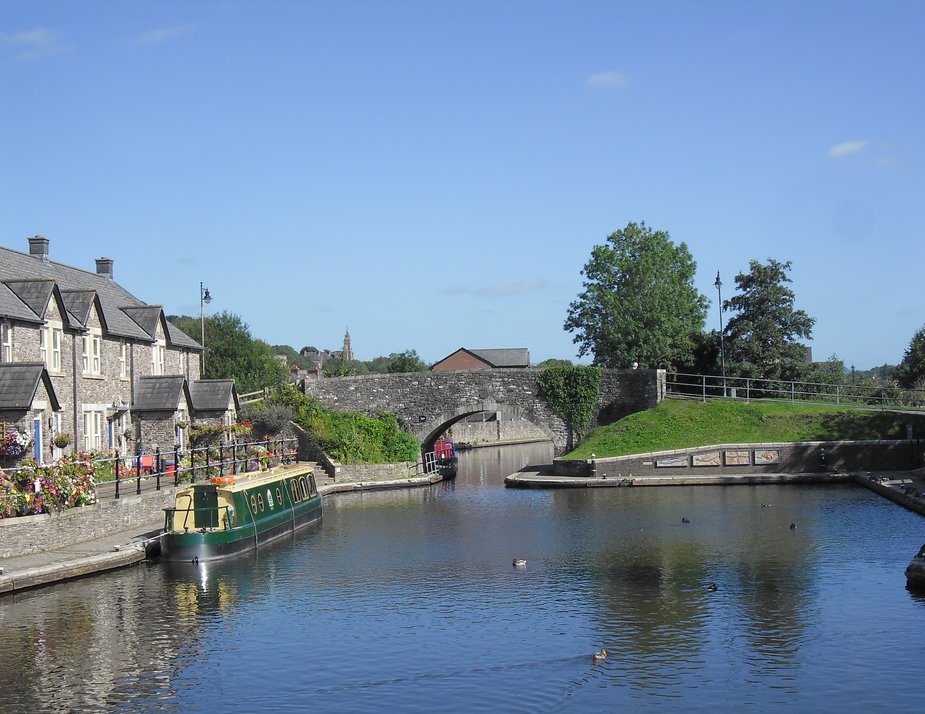 This is about a 25 mile roundtrip and the vast majority is along the canal, so it is easy cycling, and the short sections on the road are pretty gentle as well. You can decide to take a picnic lunch or eat at Crickhowell, where there are loads of options.

When you leave the site, this time turn right and take the canal to Talybont on Usk., there is a small shop here for last minute goodies and a pub wich could be welcome on the way back or alternatively use the Royal Oak in Pencelli. I have eaten at the Royal Oak and though I found the food ok ,it was nothing special.

One of the many attractive stone bridges on the canal

At Talybont, pause at the acqueduct for views of the Usk, though, throughout the whole cycle you will be rewarded by fine views of the river

and of the mountains.

Just outside of Talybont, you have to take the road, as the canal goes through a tunnel for about 350 yards. It is sometimes good fun to watch the novice boat hirers navigate this canal.

You continue to follow the canal until you reach the outskirts of the village of Dardy, just before the village there is a track on the left, which you take, this then meets the road,you turn left before joining the main B4558 which you turn right onto and cycle into Crickhowell.

At the traffic lights you turn left, cross the bridge over the Usk and arrive at Crickhowell.

(If you miss the track at Dardy, do not worry, the canal path meets the road that the track joins, so just turn left at this road, exercising care as it is very steep.)

The Bridge over the Usk at Crickhowell

Though this is the same distance as the Crickhowell cycle, this is a much harder route, The start is the same, you take the canal to Talybont.

At Talybont, just after the acqueduct you turn right, taking 'The Taff Trail' which follows an old tramway uphill. It is not easy as there are large stones across the path. After about a mile, the going gets easier, as you pick up the old railway. It is a shame that though the railway goes all the way to Talybont, it crosses private land and is not a right of way.

You then climb reasonably gently, still following the 'Taff Trail', but continually, with the Talybont Reservoir on your right, until you join a road at the end of the track. Turn right here and descend to Blaen Y Glyn Pont, exercising care as this is a steep drop.

You then continue along this road, picking up the reservoir, which will now be on your right, down to Aber village. Before you get into the village, there is a suberb farmhouse, on your left, doing tea and cakes.

You continue to follow the main road into Talybont and you will be going downhill all  the way now, where you cross the canal, turn left and back to Pencelli.

There are a couple of short cuts that you can take, one before and one after the reservoir. in both cases you take the track on your right, which will join up with the main road on the other side of the reservoir.

Alternatively if you have set out early and feeling fit, where the track, following the reservoir, meets the main road, instead of turning right you can turn left.

You take the track through the Taf Fechan Forest, up to the Neuadd Reservoir and then take the track to Blwych ar y Fan and then descend down to Cwym Cynwyn and into Brecon, picking up the canal to Brecon and back to Pencelli. This is not for the faint hearted and you will need an ATB, the track is rutted in places but is doable.

On the track up you get fine views,you can see the  Talybont reservoir in the distance and below the road for the return trip.

The first time we did this walk we walked to and from the site, which is a round trip of about 18 miles, it was in the summer and it nearly killed us, never was a pint so welcome at the Royal Oak, at the end of this one. We felt we were doing our own version of the Fan Dance, whch is the name given to the military version, though they do have full kit on and tend to run up Pen y Fan.

So this time we decided to be whimps. We took the no 43 bus in the morning from Pencelli to Brecon and then the t4 to the Storey Arms.

This tends to be the most popular way of doing the walk from Pencelli and means it is a more manageable 12 mile walk. I recall now the reason why when we first did it, it was a Sunday and the buses do not run.

Once at Storey Arms, we took the easy route up at the left of the  Storey Arms Centre, there is a well discernible track but we did a detour to  'Tommy Jones' Obelisk' who, only aged 5 got lost on the mountain and died whilst visiting his grandparents in 1900.

The climb is a steady 3 mile hike until you reach the summit of Pen Y Fan. Looking towards Storey Arms.

Llyn Cwm LLwch - above the tarn, on the ridge is Tommy's obelisk 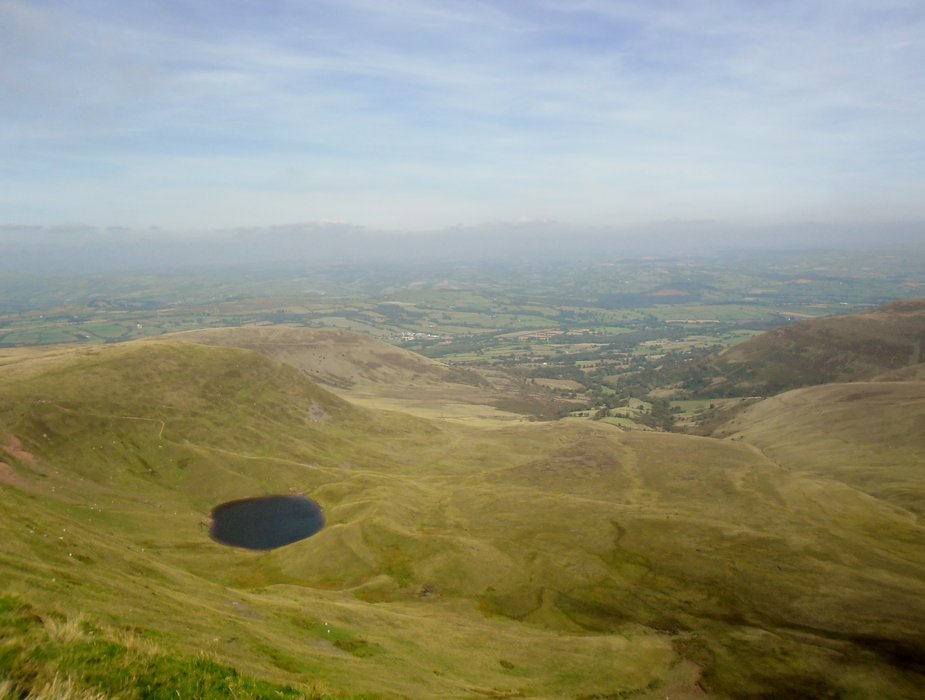 Ok Everest it is not, but it is still a great climb, did we mention that Sir George Everest, the famous mapper,who the mountain was named after was a resident of Crickhowell. 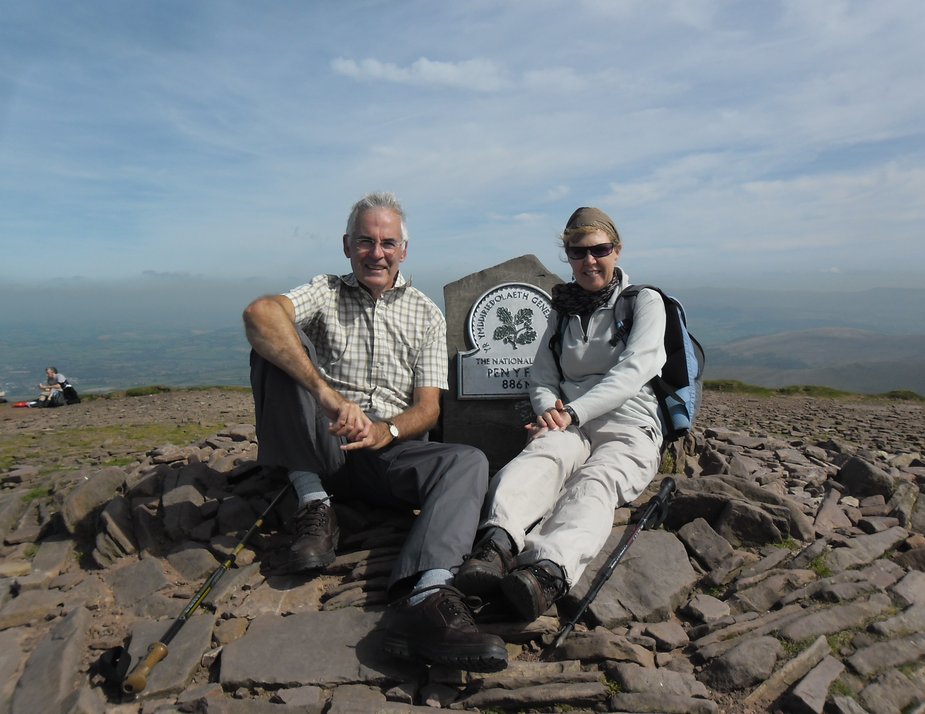 You then descend before climbing up Cribyn, you can go around but you miss the views 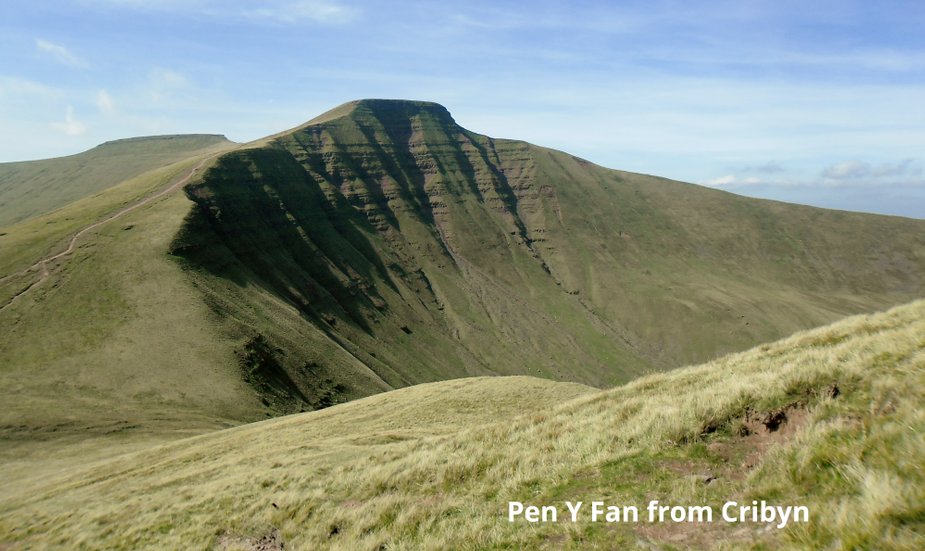 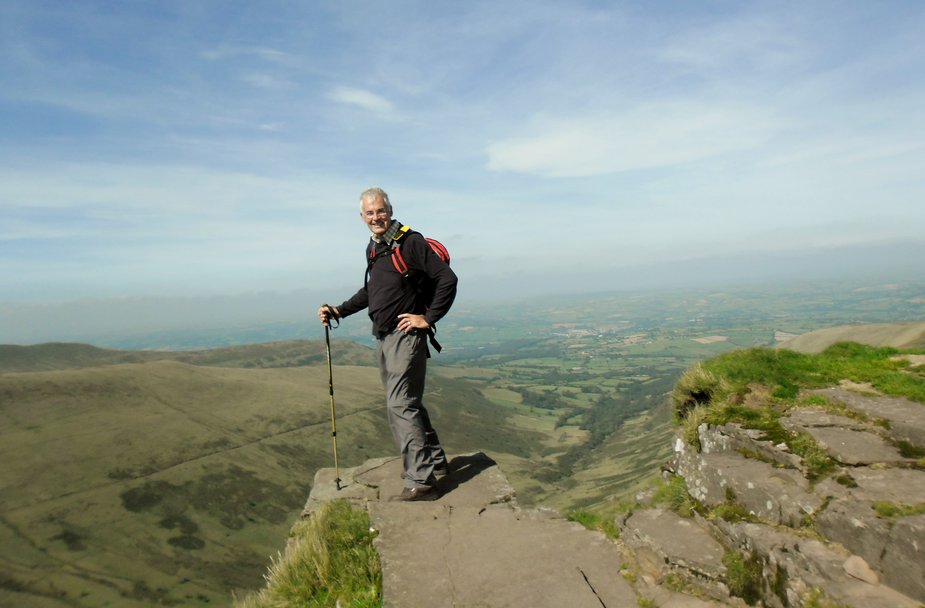 You then follow the ridge all the way around, Craig Cwmoergwm, Craig Cwareli, Bwlch y Ddwyalit - you can not miss it and you can not go left or you will disappear over the edge.  You will enjoy specacular views, so make sure you take time to stop and stare. 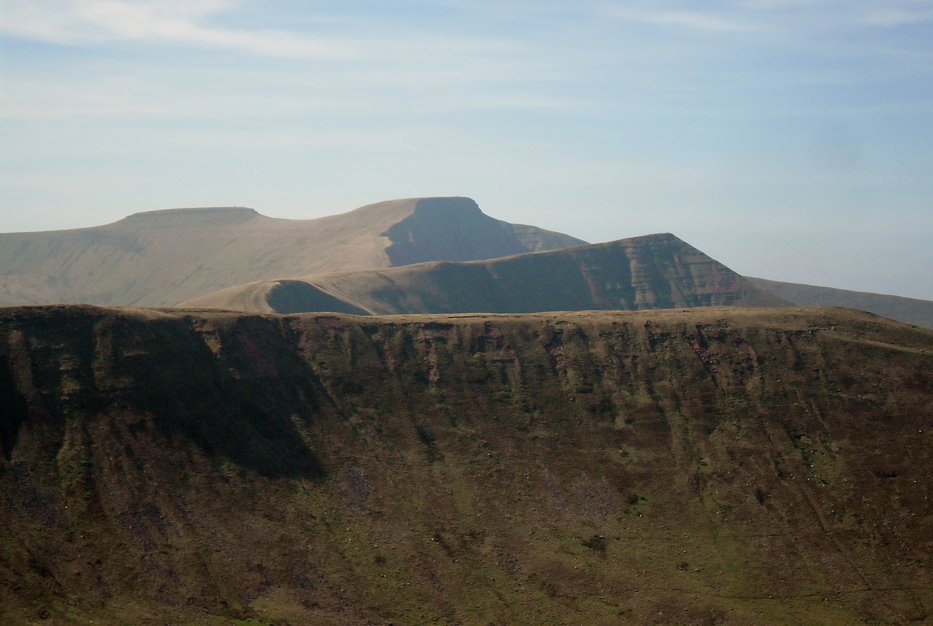 You continue to follow the ridge, until it effectively ends, it does not just stop but begins to open up and you start your descent over open moorland to Pen Y Bryn.

The path here is not always  clear but you can see the hill, Pen Y Bryn, in the distance and you just need to keep to the left of this.

After you have passed the hill you keep on going downhill for about a mile, going through gorse, here the path virtually disappears but keep the fence to your right and you will hit a green lane at the bottom.

This is a sunken lane and though not well used, it is clearly a path. Turn right down this and follow it for aboot half a mile until you reach the road. Turn left and follow this down to Pencelli and reward yourself with a pint at the Royal Oak.

The maps we used for this walk was the Explorer OL12 Map Brecon Beacons Western  and for the other route to Crickhowell OL13 Eastern Area.

Do not attempt to tackle this walk without a map, food or water or being properly attired. At one stage I was in shirtsleeves and at other times needed sweatshirt and waterproofs.

On the way back we dived into the Royal Oak at Pencelli, this is a canal side pub, great for a well deserved beer but it also does good food.