The plan was to cycle along the canal from strategically placed campsites, starting at Toulouse where the canal starts and to Agde where the canal meets the sea  and also to visit Carcassonne, which we last visited 25 years ago.

I have been looking for ages for a decent site near Rouen and I have uncovered an absolute gem, I must get a picture of the site.

Camping Municipal Pont de l'Arche provides a fine example of a municipal site at its best; a great location on riverbank, at the confluence of the Seine & Eure, excellent value at 11euros and even free wi fi but the longest access code that I have ever seen.

If you want an alternative, there is an aire next door but at this price who can argue.

To  this you can add a delightful town and very pleasant river walks. 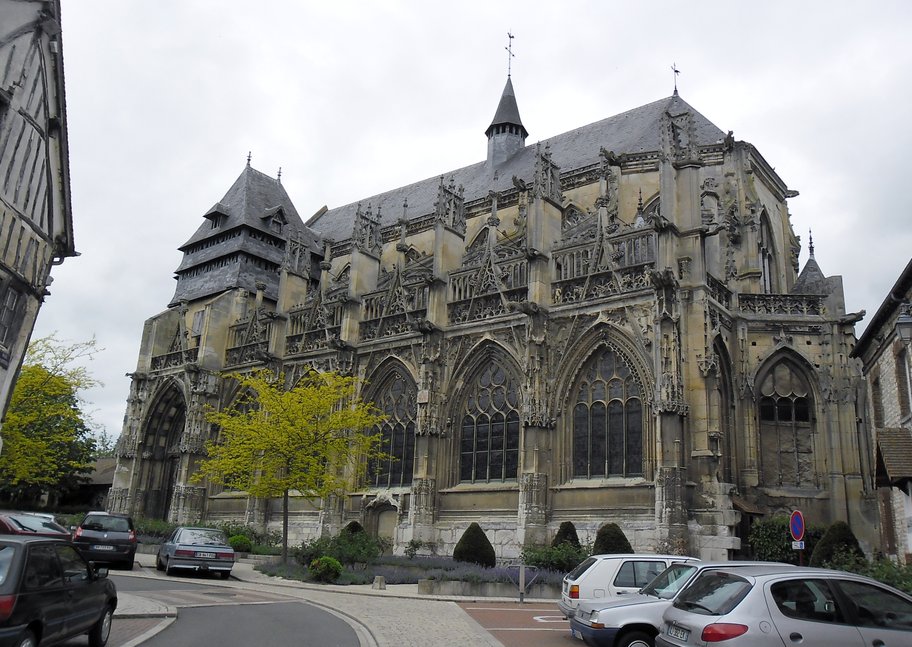 The small church in Pont de l'Arche -amazing the size of these churches in these small towns.

A quick overnighter in Cheverney at Les Saules and a 20 mile cycle on the Chateaux a Velo- how unfit we were.

Another superb municipal,Camping d'Uzurat, a short hop off the A20 and with a big supermarket within walking distance, gravel good sized pitches, excellent facilities and only 15euros a night and one of the most friendly receptions you are ever likely to experience.

Take the bus no 20, just outside of the site, ask at reception and for a few euros busfare uncover the secrets of Limoges, well worth a day's visit. 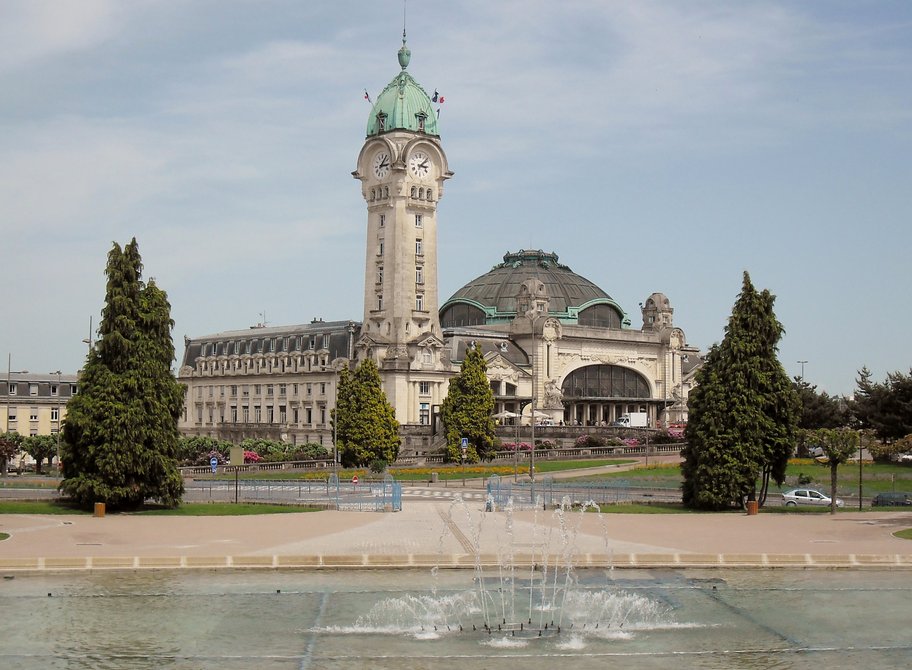 What is this imposing building? Believe it or not it is the railway station at Limoges

No visit would be complete to Limoges without a visit to Oradour sur Glane, where the old village has been left intact, exactly as it was after that infamous day, as a memorial to the 642 inhabitants of this village, who were massacred by the German SS on 10th June 1944.

There is ample room to park a motorhome in Oradour,  there is also an aire in the village. 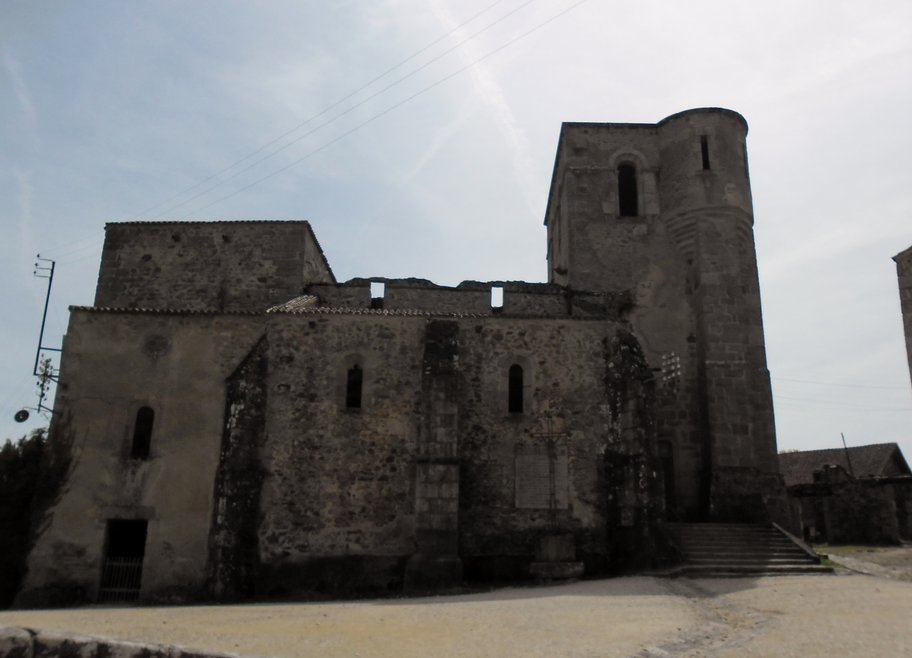 The church where the women and children were locked in , before it was set alight.

Only one woman escaped alive from the church. In total 452 women and children died.

"Here some men offended their mothers and all the women in the worst manner, they did not spare the children"Paul Eluard 1944

We have always wanted to visit "La Ville Rose" or "Pink City", the capital city of Occitan, on the River Garonne, where every building is built of red or pink bricks and of course it is the start of the Canal du Midi, which runs from here to the Mediterranean.

The Canal du Garonne also starts here and  runs into Bordeaux via the River Garonne, so effectively connecting the Atlantic to the Med.

We stayed at Camping Le Rupe, a Camping Cheque site which is about 250 metres to the Canal de Garonne and a half hour cycle into the city where we picked up our guide.

I jest not, as we approached the pool, where the Canal du Midi effectively meets the Canal de Garonne, we asked directions from a lady cyclist and she promptly asked us to follow her and proceeded to show us the main sites of her town, what a star.

Do not be put off by the entrance or the fact that the site is adajacent to a large travellers site, security is good and so are the facilities.

Toulouse is one of the most pedestrian & cycle friendly  city's that you are likely to find, a joy to explore the town and the riverfront. 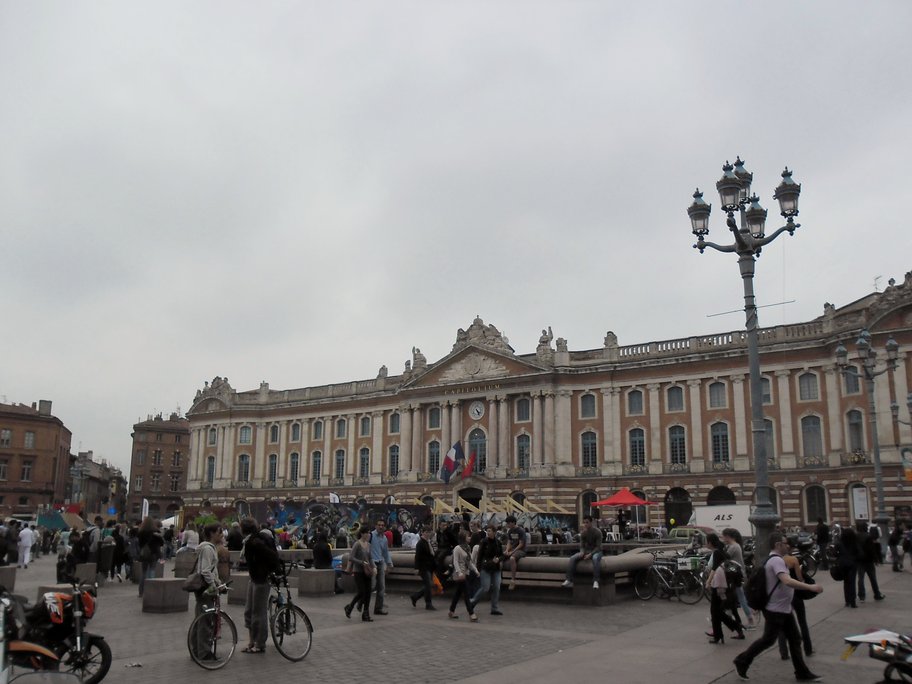 Place du Capitole, the administrative centre of the city, the current facade dates back to 1750 and is the main pedestrian square in the city.

The picture below is the start of the Canal du Midi 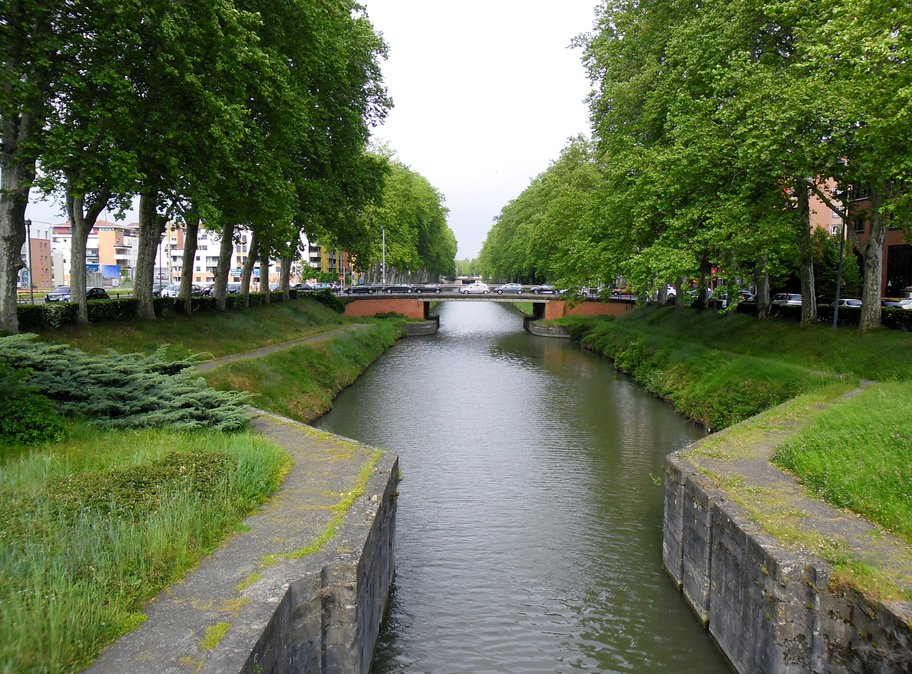 Ok it is touristy, ok there are shops selling tourist tat, ok it has been rebuilt and it is not strictly authentic and it is heaving in the peak period (but no crowds offpeak) but it is still absolutely awe inspiring, like a fairy tale castle and deservedly a UNESCO world heritage site.

You can not fail to be moved by visiting it and then to be able to have a meal within the confines of the cite next to the chateau, is something to behold. The meal has to be cassoulet, a slow cooked casserole containing typically sausage and duck with white haricot beans, served in a traditional earthenware cassole.

Your only decision will be choosing which restaurant, all claiming to serve the most authentic or best. 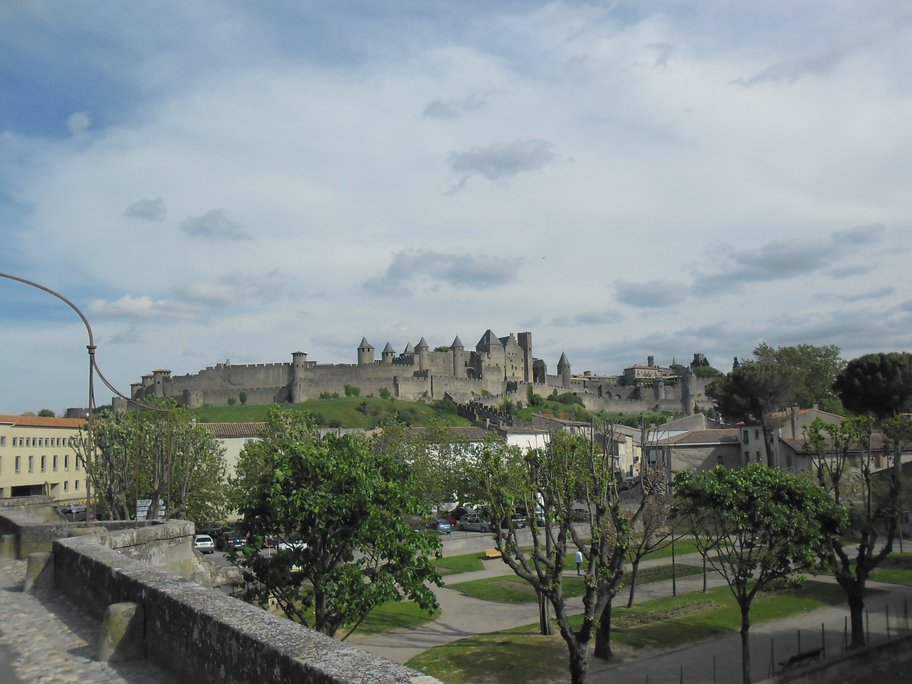 The Cite photographed from the Pont Vieux, over the River Aude, which connects to the lower town, Bastide St Louis 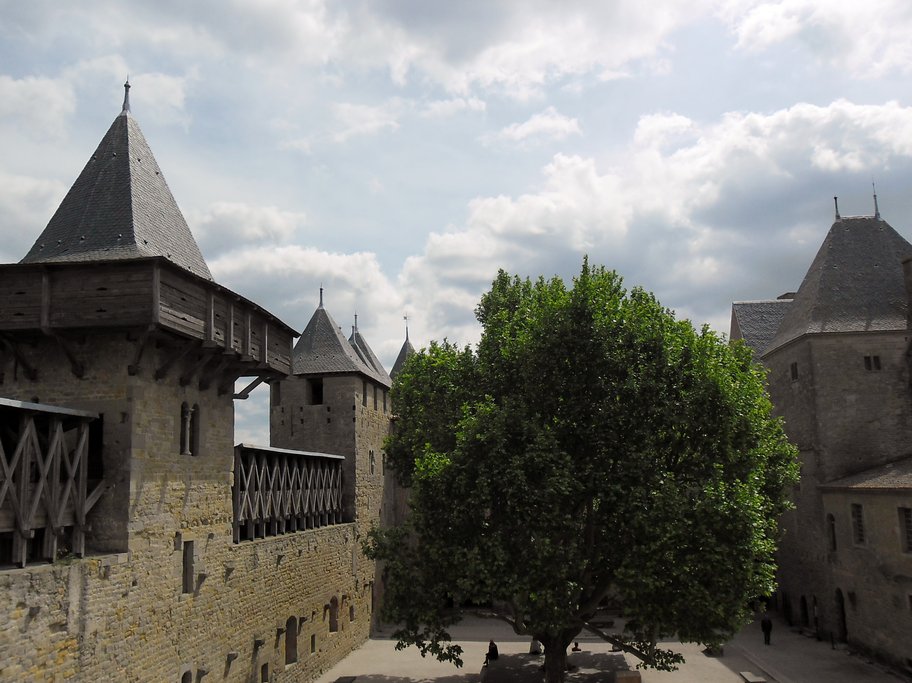 The Chateau, within the inner walls is the only part of the fortress that you have pay an entry fee for, but it is well worth it and it also allows you to walk the inner walls. 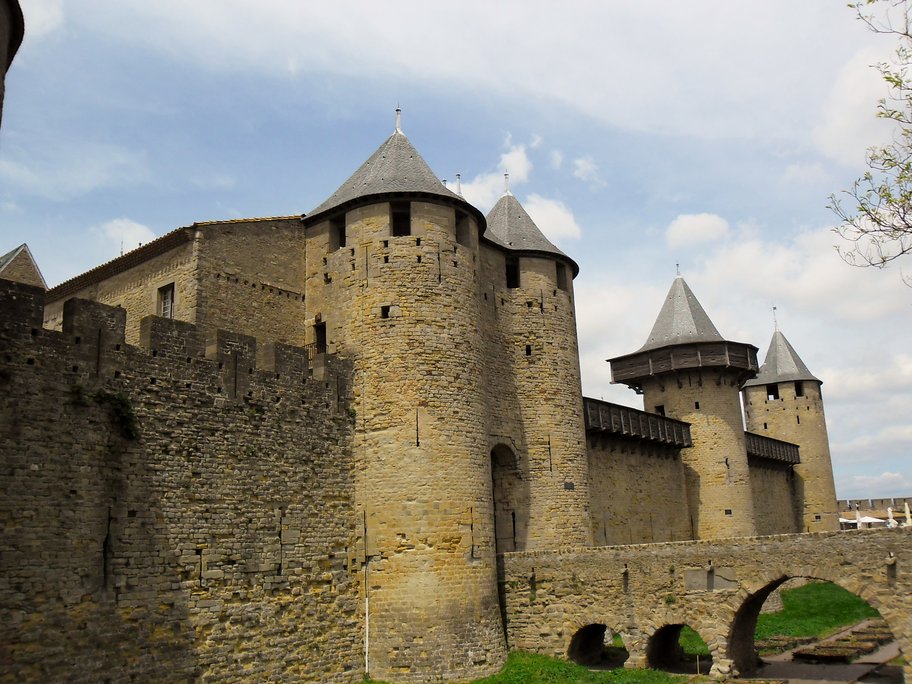 One of the entrances to the Cite 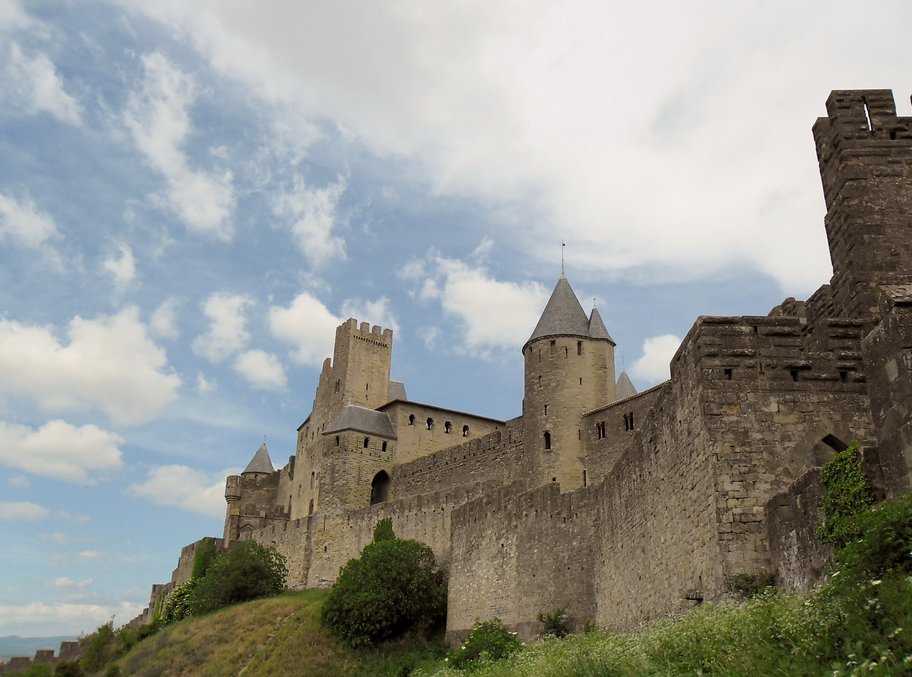 Though the fortress is the main attraction, the walk over the old bridge to the lower town, Bastide St Louis, is extremely pleasant and the lower town is not unattractive.

The Canal du Midi port (below) is located in front of the railway station. 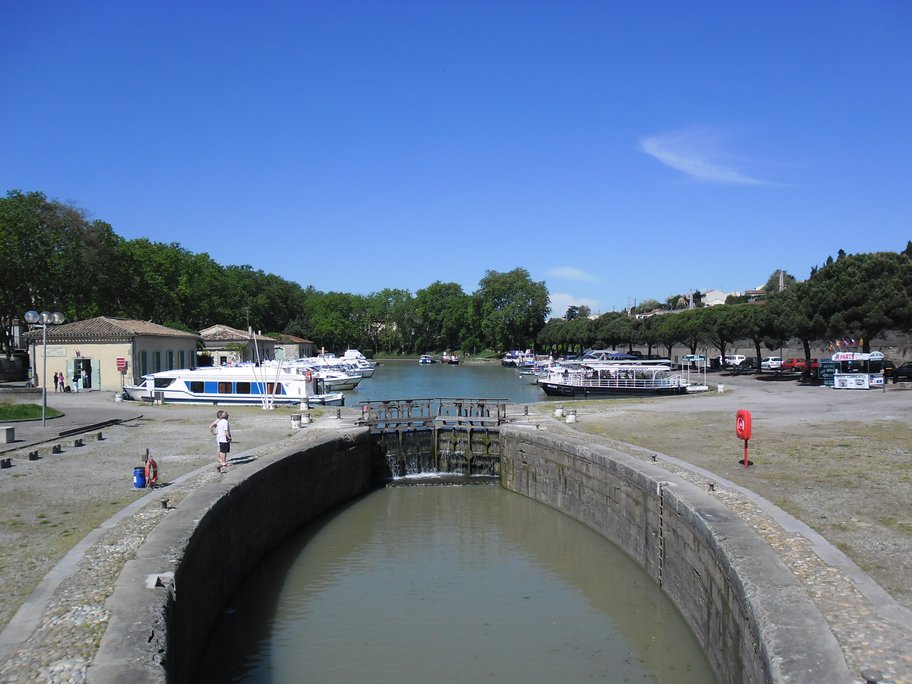 If you follow the canal to the left, this takes you in the direction of Castelnaudary.

You will need to go on the road parallel to the canal as the canal follows a cutting out of the town.

After about a kilometre, you pick up the canal entrance under a railway bridge. The canal path here is a typical earth path so you will need an ATB or hybrid bike.You then cycle for as long as you like.

In the other direction towards Narbonne, you pick up the towpath in the town.

The towpath here is better, of the gravel variety but ironically 15 miles out, a pebble jumped up and got caught in my rear wheel gear hanger and the result was it became jammed into the wheel.

It was possible to pull it out and return back and luckily it did not break off until we got back to Bastide St Louis.

Fortunately at the port there was a bike hire facility, which gave us the address of a bike repair shop, who though unable to repair the bike, were able to convert it from 24 gears to a fixed gear, which was hardly a problem on canal towpaths.

Ironically it was called Fun Cycles. 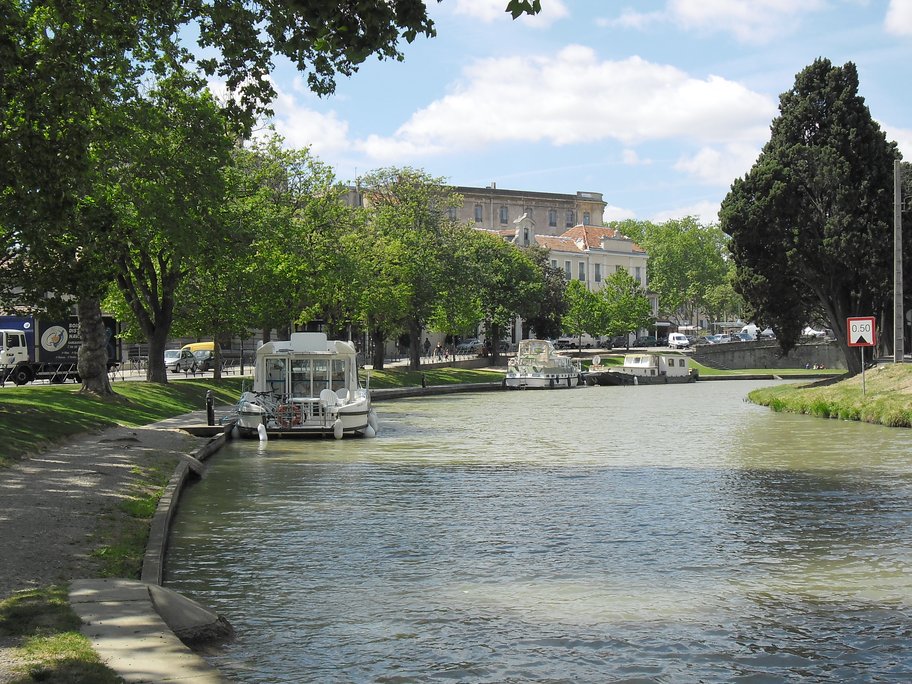 The above photograph was taken as you enter Bastide St Louise from the Narbonne direction.

We paid 22 euros a night. The site had modern clean sanitary facilities and the pitches were of a good size and many were surrounded by hedges. There was also a dedicated motorhome service point.

The site is within a very pleasant half hour river walk to the fortress which is the main benefit of this site.

Our final stop was at Vias, as it allowed us to dip our toes in the Med, and trace the Canal to the sea and take a trip to Beziers.

Vias is an old town and worth a cycle up to it.

We stayed at the campsite Les Salisses using camping cheques. This is a large commercial site with a lot of statics which appeared popular with French families.

It had all the trappings of a large site, swimming pool complexes etc and I would imagine in July & August it would be heaving.

In May it was fine and though there was an absence of a designated  motorhome service point, we were able to improvise.

We also had the benefit that we were the only unit in a section designed for ten, so a feeling of space.

The real advantage was that it was about 500 metres walk to the sea and the same distance to the canal. 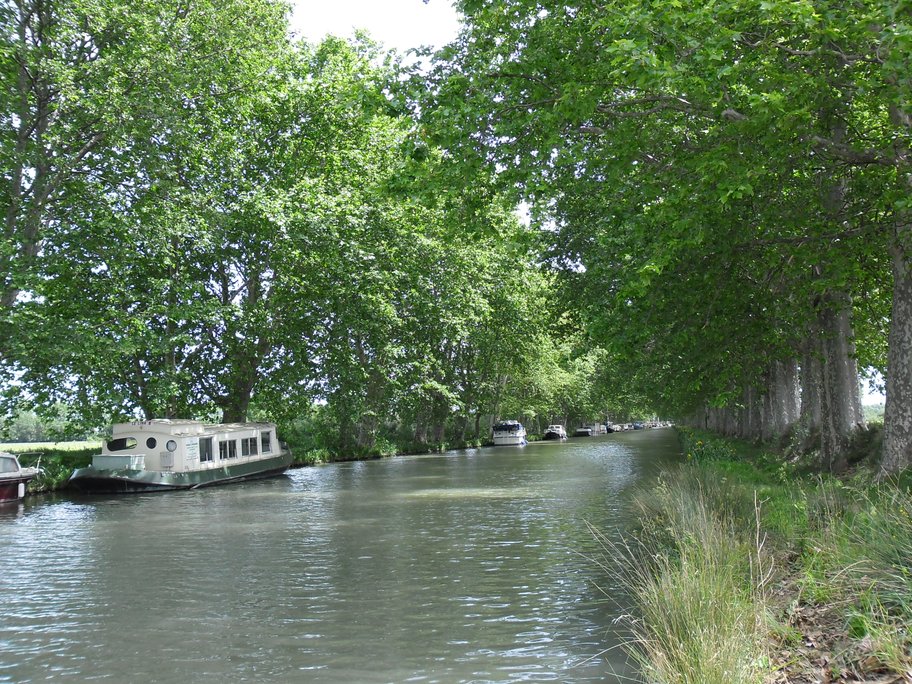 When you reach the bridge outside of the campsite and turn left, you head in the direction of Beziers and though the first section of the canal path is track you soon reach a port area and thereafter it becomes paved, thus making a visit to Beziers in a day feasible.

Just after the port, which is about 5 miles from the campsite there is an etang and for birdlovers it offered us an aerial display of beeeaters,  whose colours are simply amazing, as they twist and turn in the Mediterranean sun.

They were also very considerate and allowed us to view them whilst they perched on posts.

We had the added benefit of black winged stilts, storks and egrets(cattle & little).

Along many parts of the canal. you get tree lined poplar avenues which offers welcome shade, but there are some concerns regarding this habitat, as they are being attacked by pests which is devastating whole sections.

Just outside of Beziers there is a small town, called Beziers Villeneuve, which has a very attractive small campsite on the banks of the canal and adjacent to this is an Aire, this has the advantage of making a trip into Beziers easier, if this is the main priority. 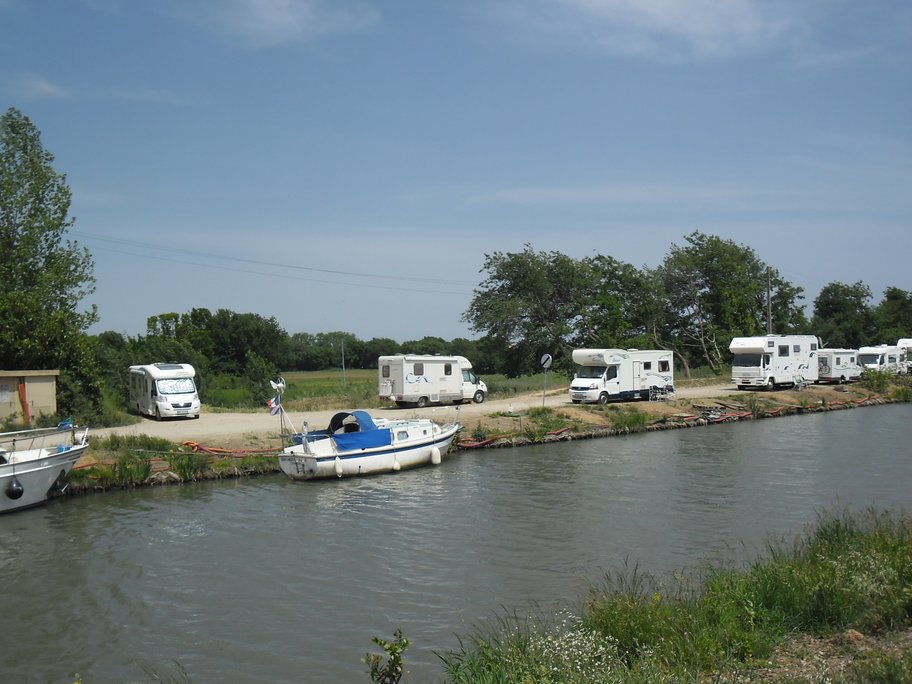 If you continue onwards you reach a distinct port area which gives you the option of cycling into Beziers or continuing along the canal to the acqueduct which crosses the river Orb. This was completed in 1856 to allow safer navigation of the river. 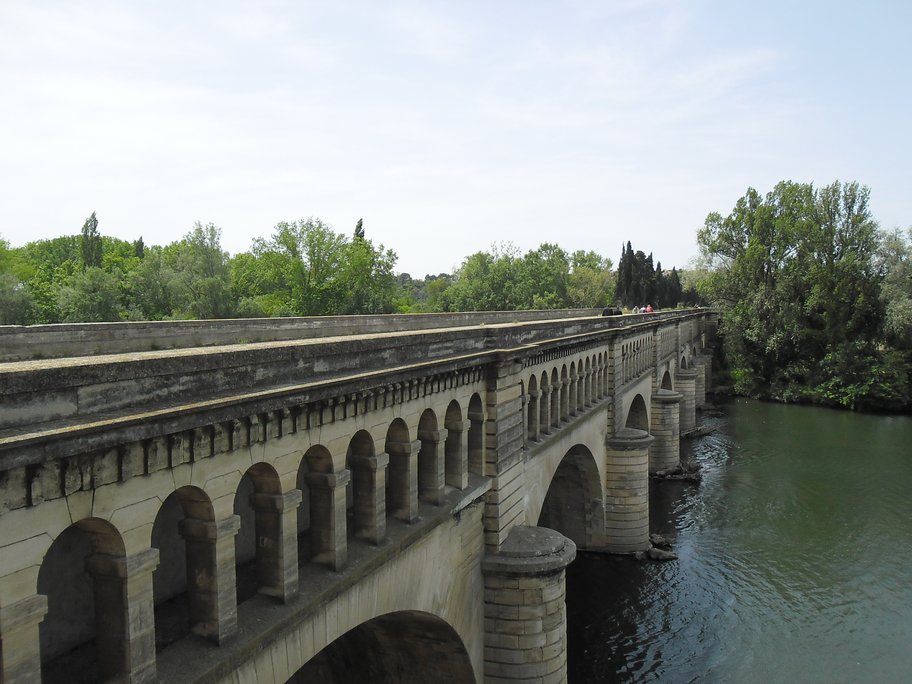 A short 10 minute cycle over the acqueduct and you reach the Neuf Ecluses which  is one of the most spectacualr and visited features on the canal .Apparently there are no longer 9 locks but I must confess I did not count them. 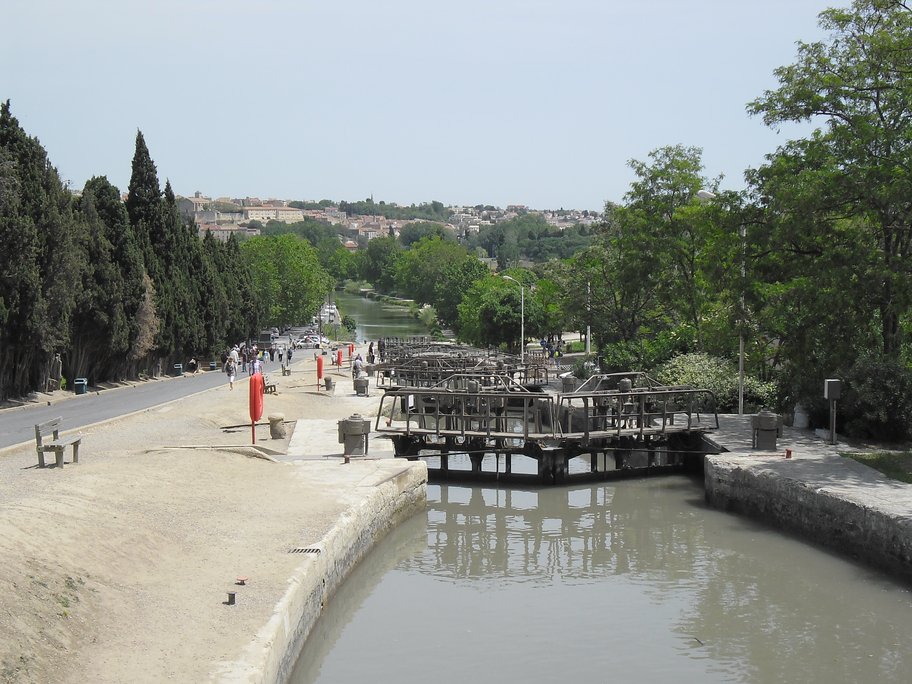 I was just mesmorised by a large cruise barge which filled the whole lock, it did not seem possible that it would fit. This is an ideal spot for either a picnic lunch or at the restaurant. 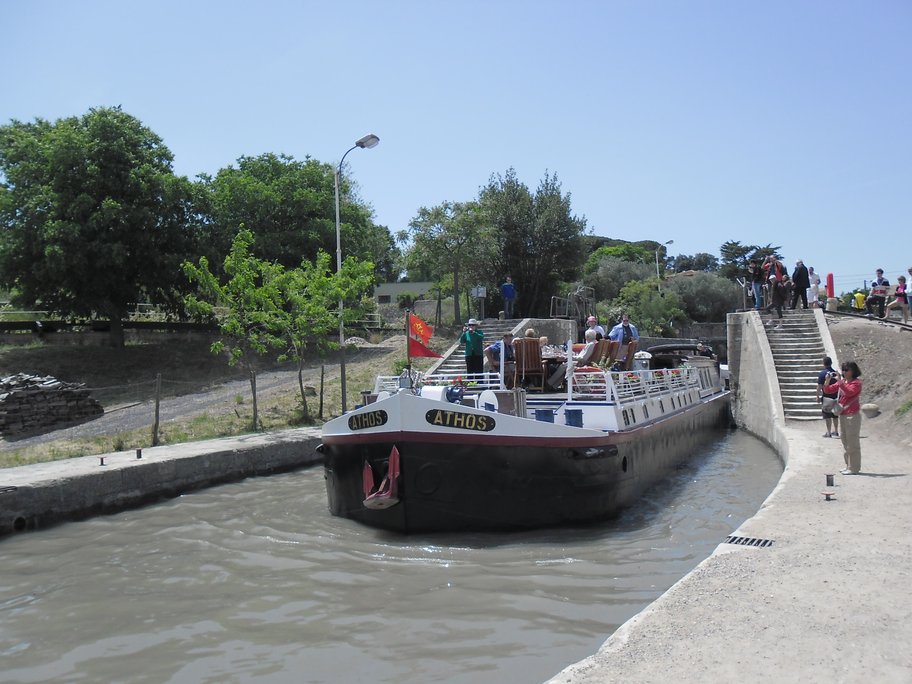 The Cathedral of St Nazaire at Beziers - you can also cut off for the town at the locks,it is about 10 minutes by bike 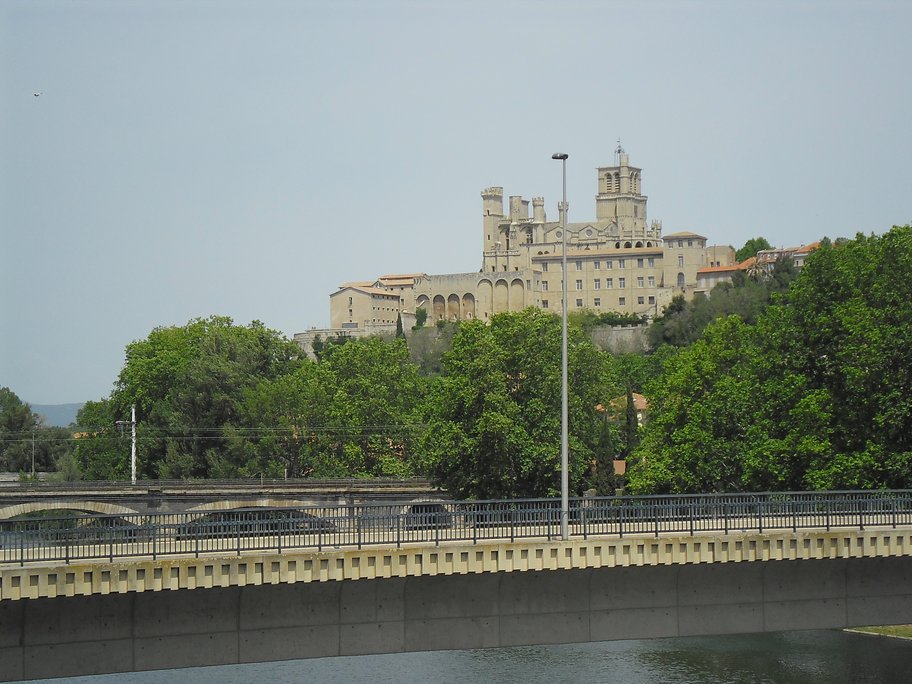 Towards Agde & The Sea

Believe it or not, if you turn right when you reach the canal bridge then you head towards the sea and the town of Agde.

The towpath is a mixture of typical earth path and gravel, but is easily cyclable and within an hour you reach the port area of Agde and the locks, which effectively signify the end of the canal, as it meets the River Herault. 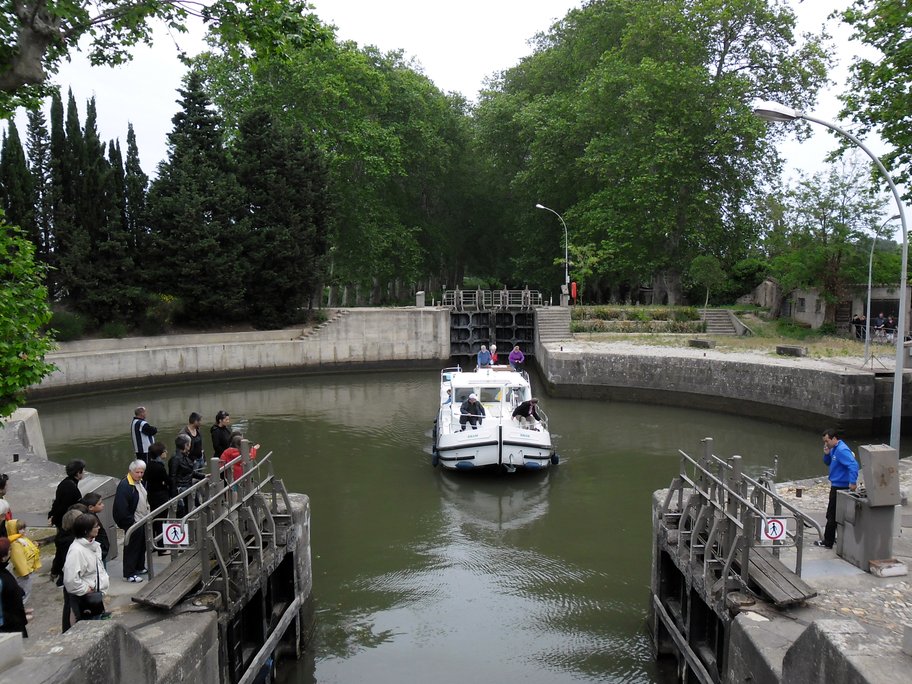 Above is the three locks system where there are two canal branches which meet the river. It appears that the one straight ahead is that used by rivercraft. It is quite a popular observation point as canal traffic negotiates the locks.

If you take the right hand branch of the canal after you cross the main road, this takes you into Agde.

Once you reach Agde, you can cycle down the right hand bank  of the river Herault, for a couple of miles until you reach La Tamaraissiere and the sea. Just to prove it, a picture of yours truly at the sea at La Tamaraiissiere, mind you it could be anywhere. 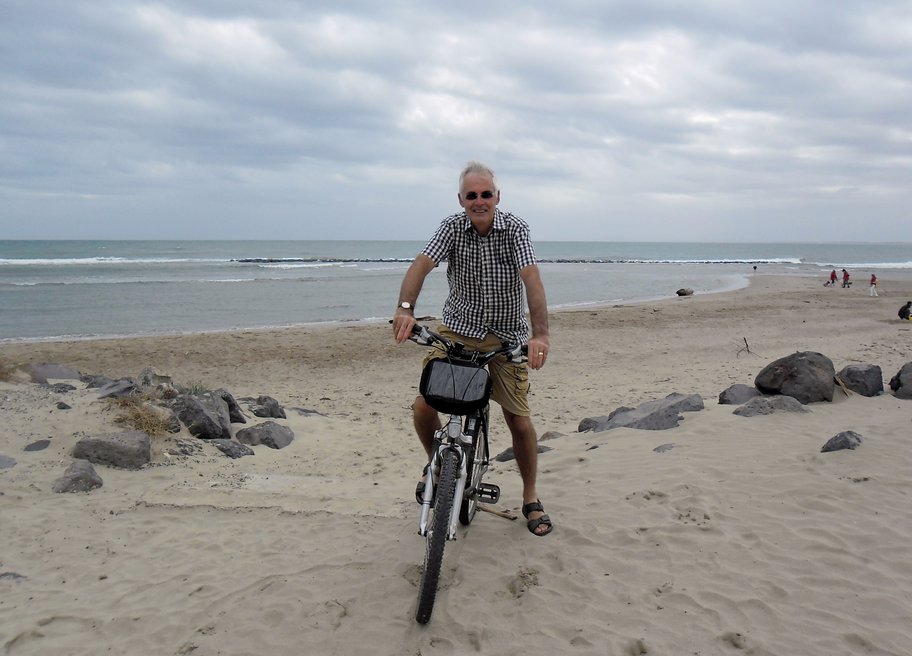 A short cycle back to the river estuary and you pick up this dinky little ferry which transports you across the river to Le Grau D'Agde, for the princely sum of 1.5 euros each and the bikes go free. 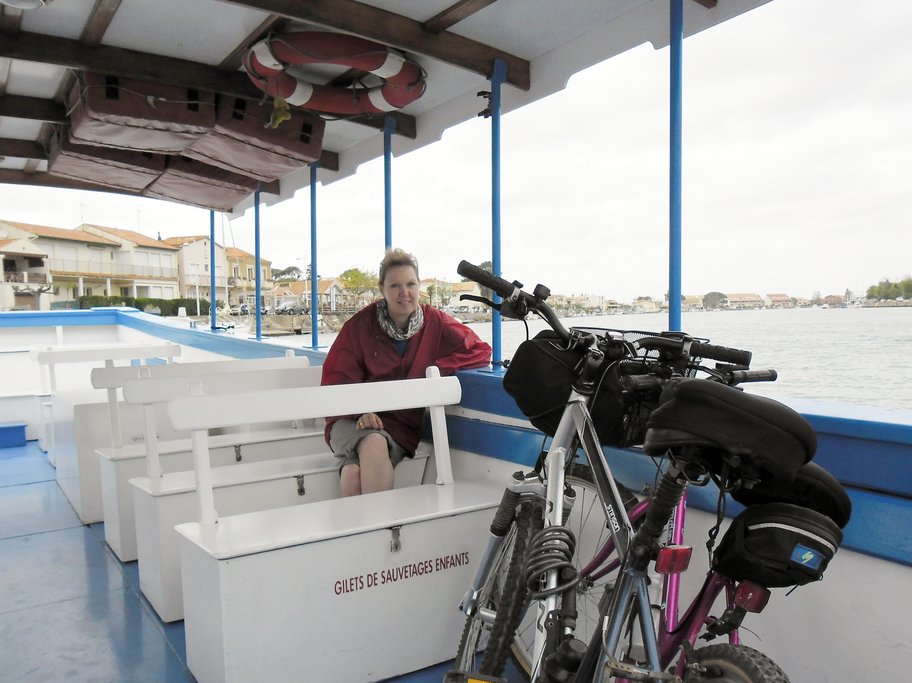 The town has a good selection of shops and restaurants, which was a good thing as it was getting late and we had nothing for supper.

Once over the other side of the river, you can cycle back into Agde, along designated cycle paths, where there are many riverside restaurants and then pick up the canal again for the return trip to Vias.

The picture below is of the Herault estuary, where it meets the Mediterranean. On the left of the picture is Le Grau-D'Agde and on the right La Tamarissiere. 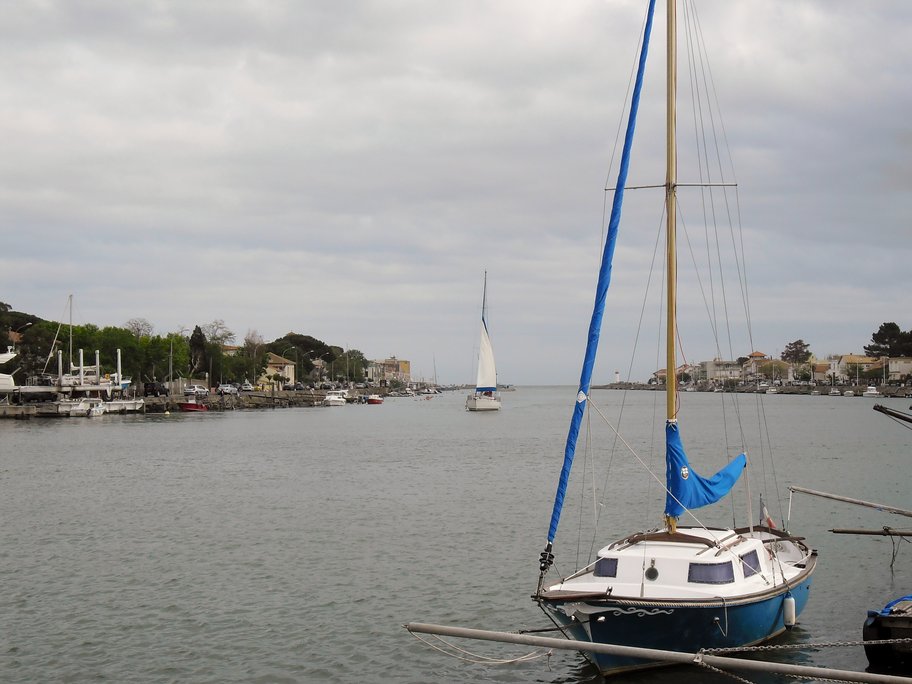