Seville by motor home is relatively easy and we based ourselves at Camping Vilsom at Dos Hermanas, which is about 8 miles from the centre of Seville.

We were a little apprehensive about this site for two reasons, firstly it had mixed reviews and secondly it appeared to be a fair distance from the centre of action. Our fears were unfounded. Yes it is true that the pitches are small, so manoeuvring can be tricky, particularly for large units and caravans will not be able to stake their territory.

Ok the last point is a wicked generalisation  and in reality only reflects the fact that motor homers are more nomadic.The site is very shaded, hence the trees which make pitching up tricky but Seville is one of the hottest cities in Spain, so this shade is generally greatly appreciated, except by the most ardent of sun worshippers and in any case you will be out for most of the day.

Yes reception was efficient without great warmth but not unpleasant and they gave me everything that we needed for our visit to the City, which included a bus timetable and the information was given in a matter of fact manner but realistically this reflects the high turnover of this site.

Facilities were spotless and there was a motor home service point.

Cost 24 euros a night in May

With regard to access to the city, this could not be more straightforward, a short walk to the town of Dos Hermanas and a half hourly service which drops you in the centre for the princely sum of 1.60 euros.

Tip Avoid weekends, there is a greatly reduced bus service.

The bus does come back a different way but this is not difficult to work out where you need to get off and it I also a good opportunity to stock up at the large carrefour, on the bus route and within a slightly longer walk back to the site.

The alternative to this is to drive in to the motor home aire in the city, an option we chose not to exercise. Seville is a large city and by consequence traffic is heavy, it was much more pleasant to sit on an air conditioned bus for 30 minutes.

The bus drops you close to the Maria Luisa Park and the Plaza Espana, which strangely appeared to be a grave omission from my guide book, which just goes to show that guide books are just what they are meant to be and there is no substitution for just wandering and discovering.

What an omission it proved to be, The Plaza Espana is impressive by any measure and was designed to showcase Spain's industry and technology exhibits, at the1929 S Ibero-American Exposition World Fair.

It is a huge half-circle with buildings continually running around the edge, accessible over a moat by numerous bridges, representing the four ancient kingdoms of Spain. 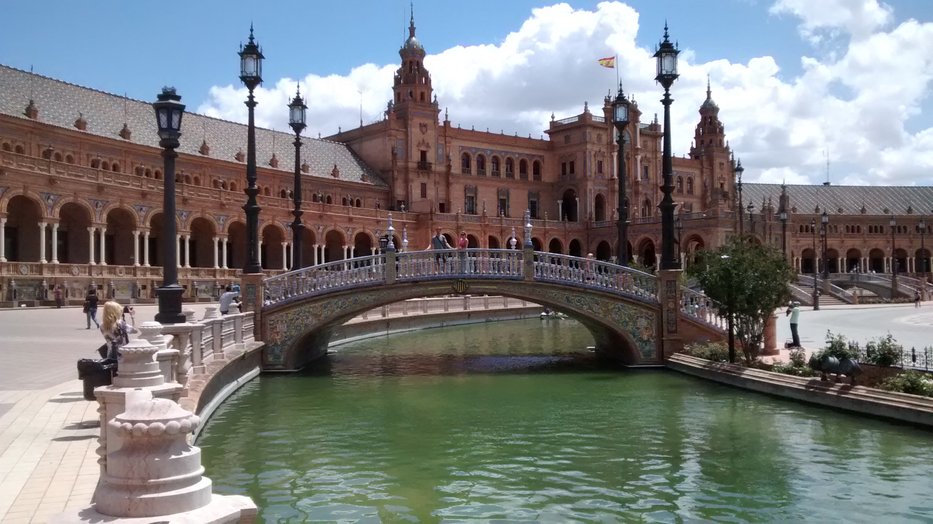 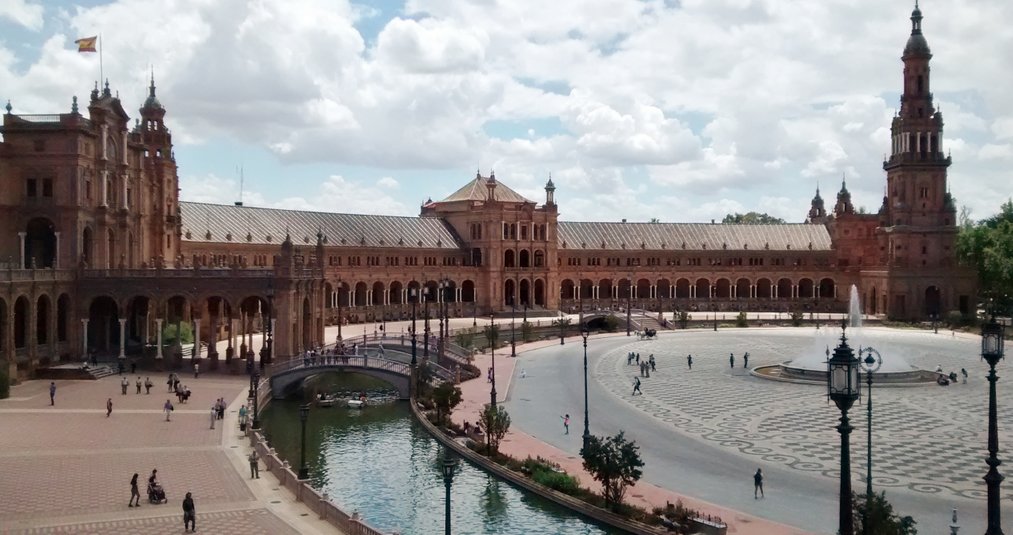 By the walls of the Plaza are many tiled alcoves, each  one represents  a different province of Spain. 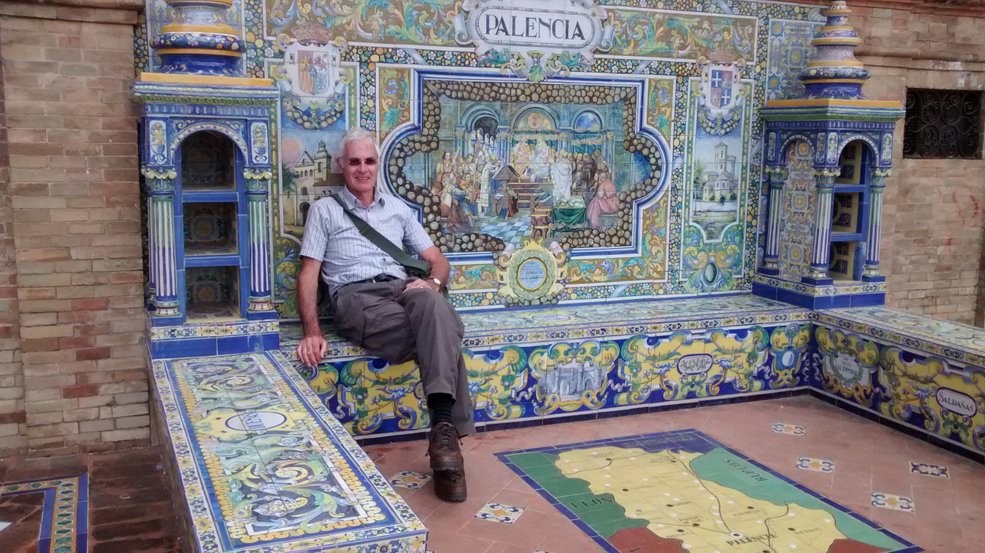 The principal area is Santa Cruz, which is Seville’s old Jewish quarter, which is a warren of white alley ways and patios, which is arguably one of the most picturesque and romantic parts of the city and you could spend hours wandering these alleyways 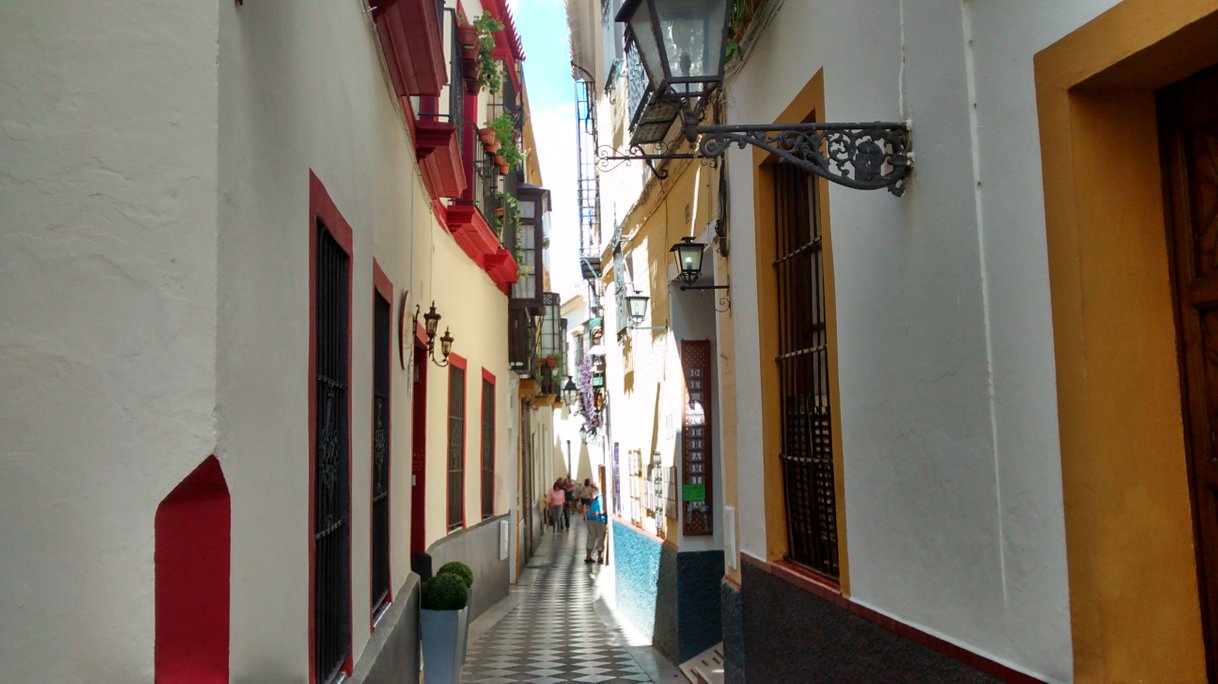 It is also the location of the two principal sites of the city, the cavernous Gothic cathedral,with its well known La Giralda tower and the royal palaces of the Real Alcazar, with its lush gardens, which in themselves are worth a visit.

The Cathedral of Saint Mary of the See or Seville Cathedral, completed in the early 16th century.is the largest Gothic cathedral  in the world, due to some technicality, which I can not remember and the 3rd largest church . In any event it is huge.

When you are standing below the dome, just remember it has already collapsed twice, once during its building and again in the 19th century after an earthquake.

The nave is magnificent in its size and grandeur.

As a side point  Christopher Columbus is buried here. 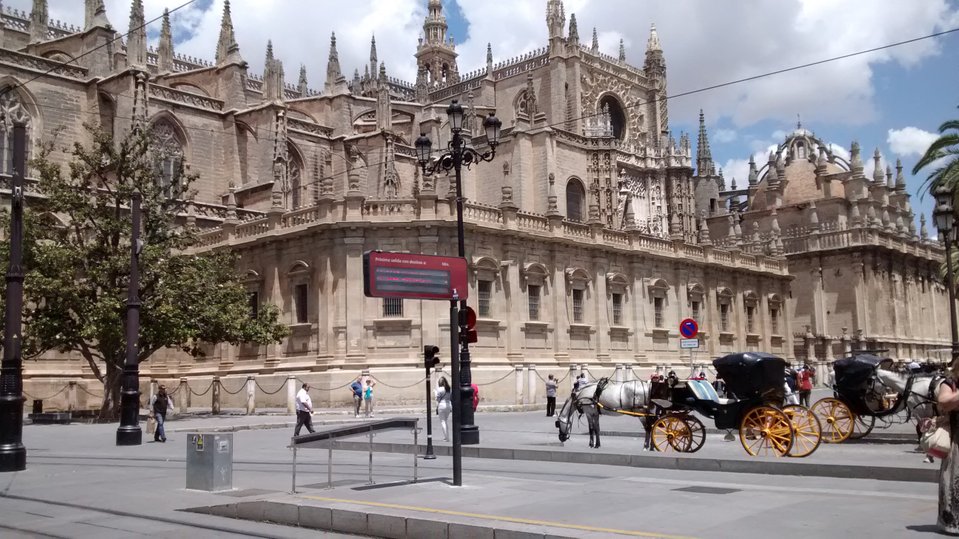 The Giralda or the bell tower of the Cathedral of Seville stands 343 feet (105 m) high. It started life as the minaret of the mosque that stood on the site  when Spain was under Muslim rule, and as is the case of many Moorish buildings in Spain underwent conversion under Christian rule and in thi case was converted into a bell tower  for the cathedral.. 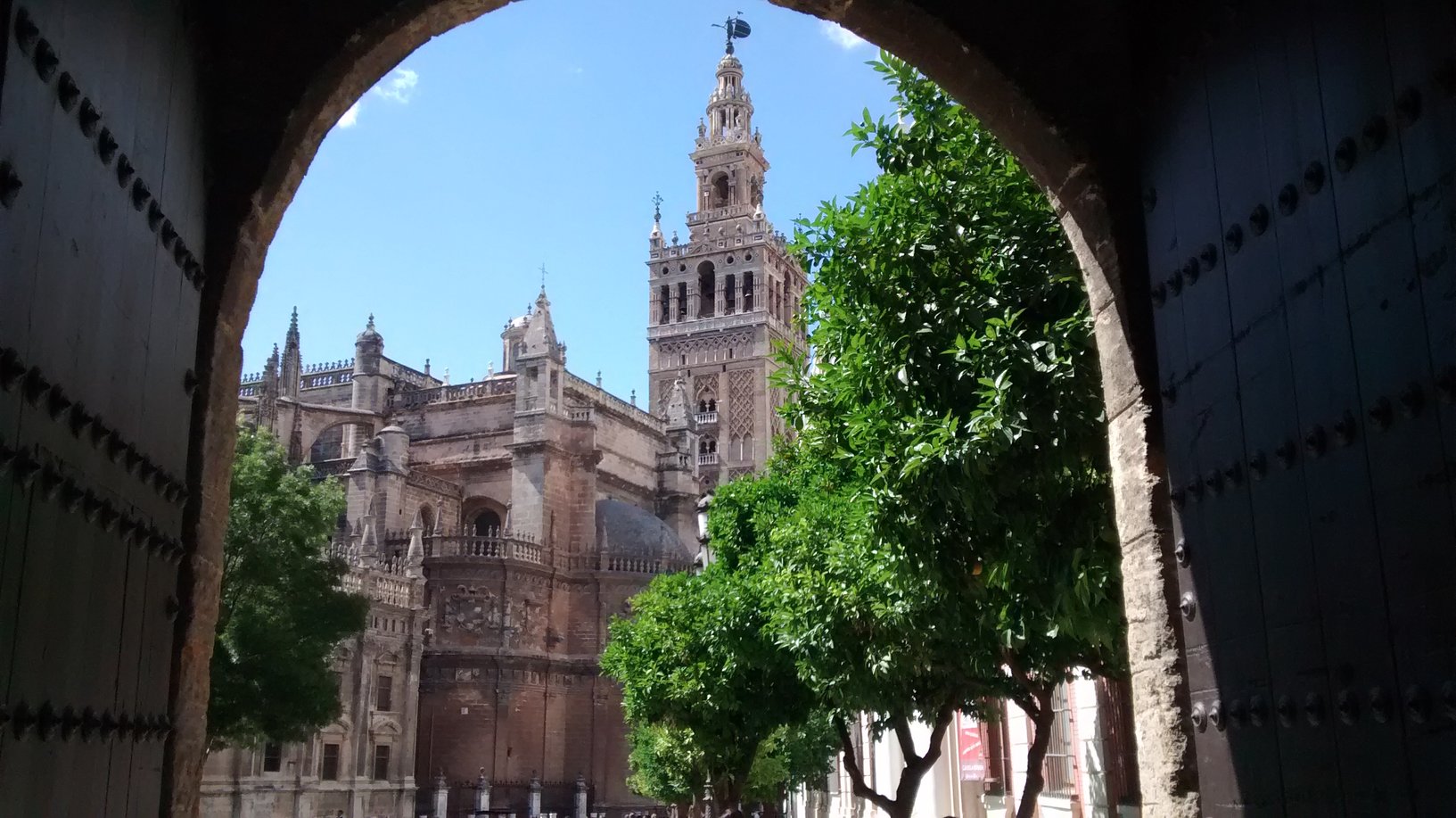 "El Giraldillo", was installed in 1568 to represent the triumph of the Christian faith. 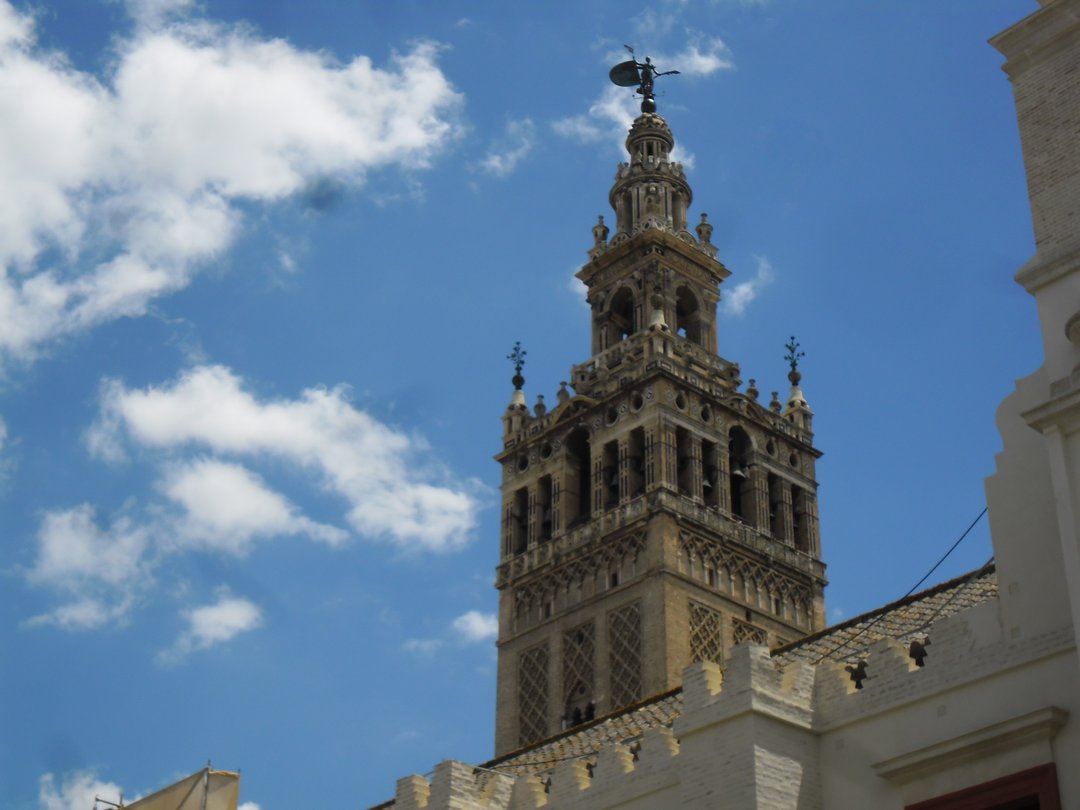 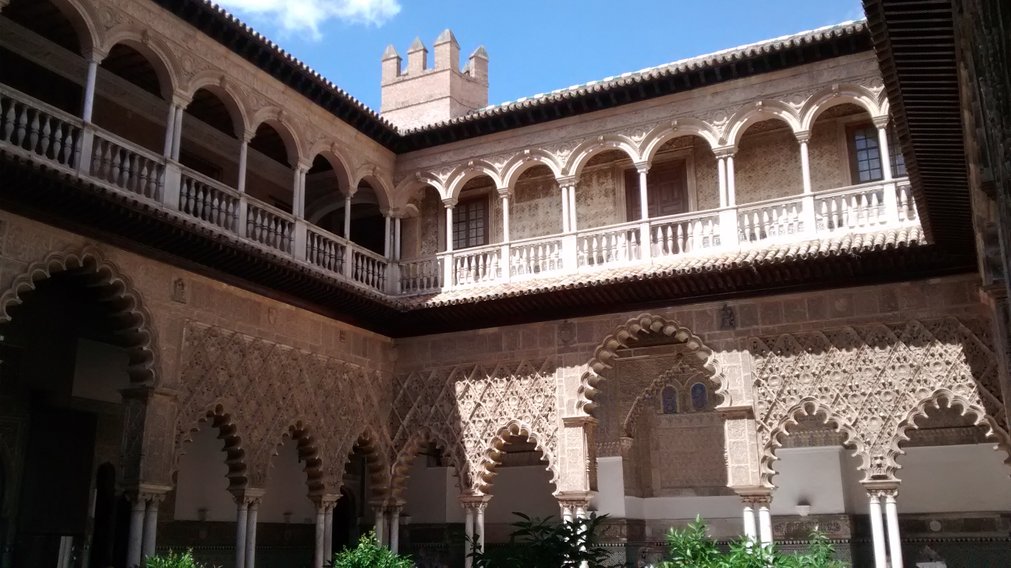 The other prominent site, right next to the cathedral is the Real Alcázar  which is  a royal palace, originally a Moorish fort and still used today by the Spanish royal family. The palace is considered as one of the most beautiful in Spain. and who are we to argue with that, together with its surrounding gardens, it is stunning.

The Patio of the Maidens in the Alcazar 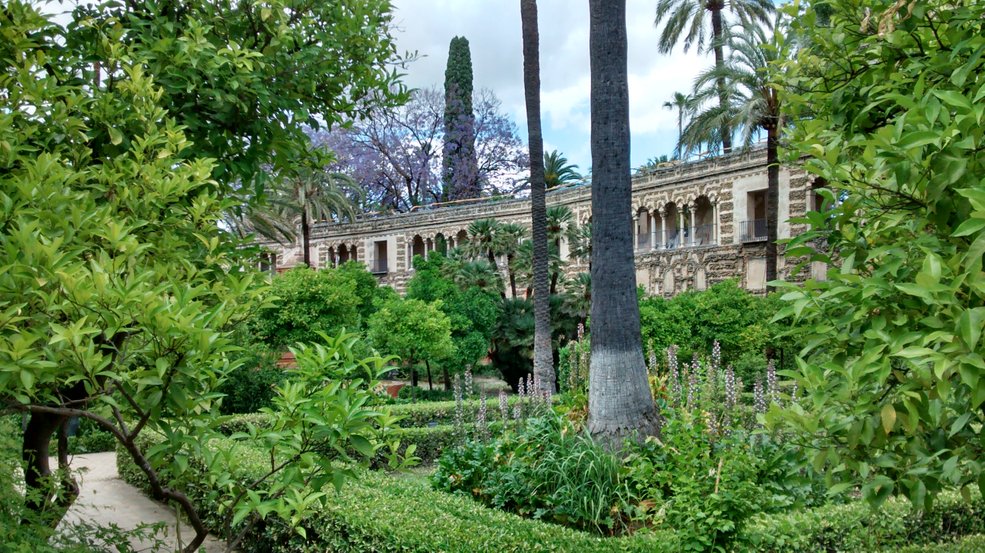 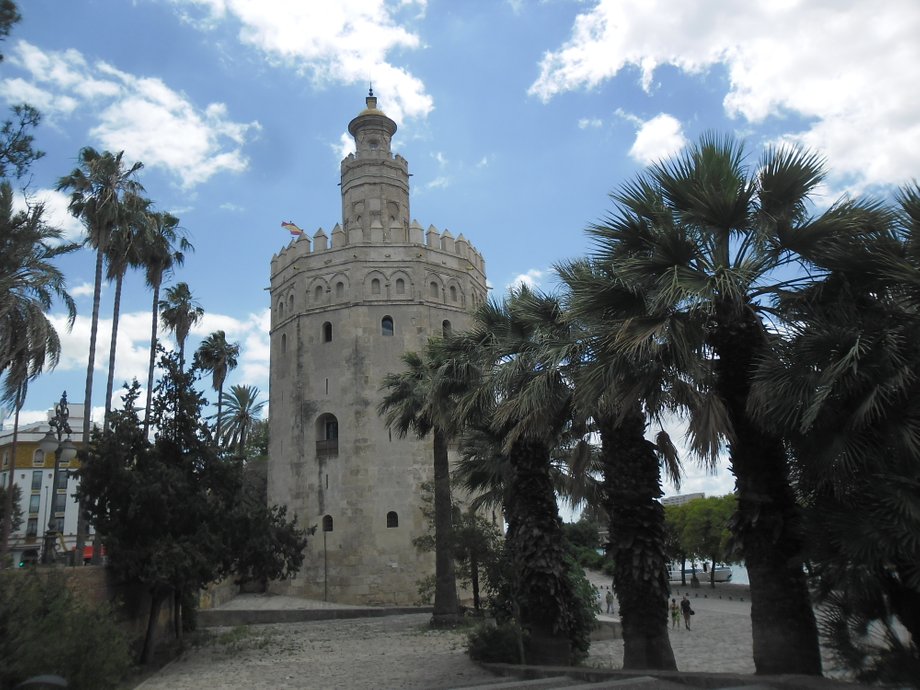 The gardens of the Alcazar

The other central area in Seville is El Arenal which used to be the old port area and unsurprisingly is dominated by the River Guadalquiver and there is a pleasant walk along the riverfront and you pass the dominant feature on the front, which is the Torre del Oro, originally a defensive fort,now a naval museum.