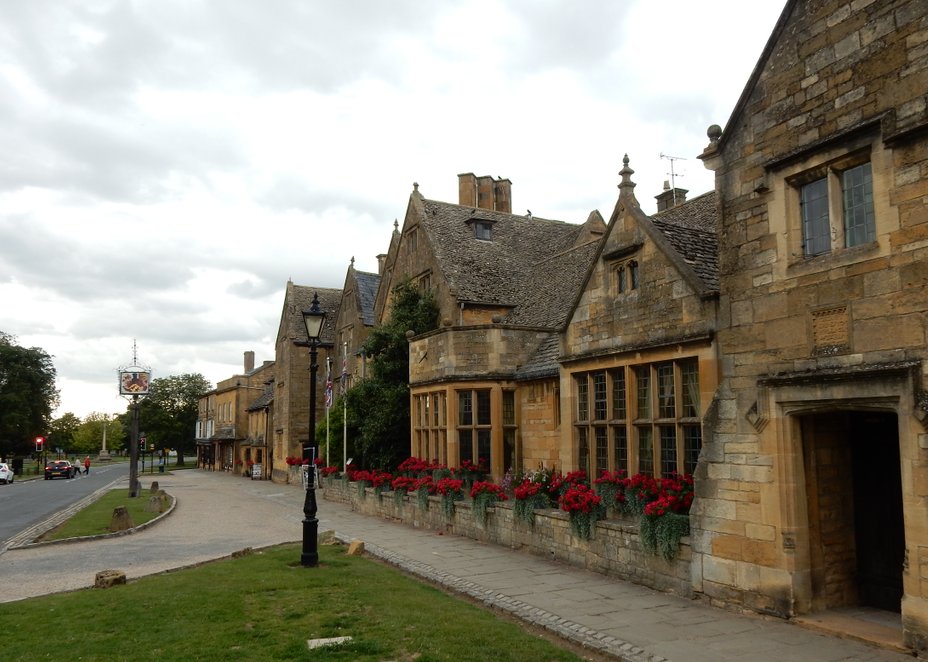 Broadway Tower - A circular walk from the site - about 5 miles.

Walk down to the village, then along the High Street, until the junction to Oxford.

Continue past this road junction and the Cotswolds Way continues on your right, shortly after this junction. It is sign posted.

Follow this all the way up to the tower but in the words of the poet W H Davies, take time and stop and stare as you enjoy magnificent views of the village. There are even seats available, just before you reach the summit.

For a small charge you can climb the tower, a folly dating back to the 18th century and experience even better views on a fine day. 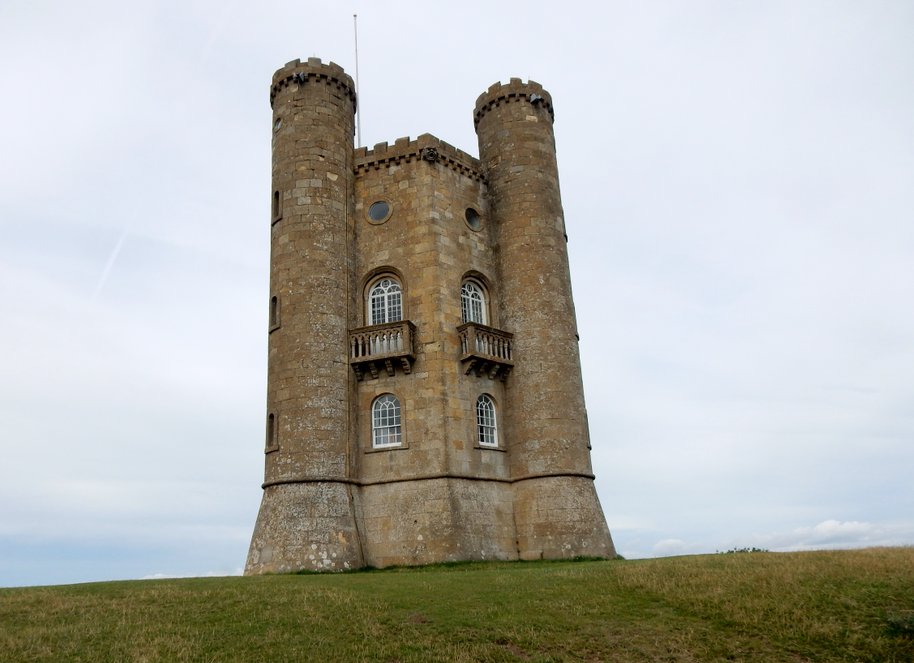 A short stroll downwards takes you to an excellent café where you can enjoy afternoon tea so this is an ideal walk for your first day arrival at the site.

After tea, take the road down, passing the Rookery, shortly after you turn right and then turn left down Coneygree Lane.

We passed near Dor Knap, which used to be a Toc H Meeting House, which I visited on that scout camp, 50  years ago.

Descending down Coneygree Lane you turn right into the road which leads into Broadway but before you continue onto the village, you must visit St Eadburgha's, it is a magnificent12th century church, and it has a beautiful simplicity to it, as with the case of  many Norman churches  and it seems a million miles from the hustle and bustle of  Broadway.

There has been a church on this site since Saxon times and the church gets its name from Eadburgha who was the grand-daughter of Alfred the Great. Legend has it that as a child Eadburgha was asked to choose between receiving jewels or her own Bible, she chose the Bible.

Originally the village was centred on this church but when the route from Worcester to London came into being,  Broadway became a busy stagecoach stop and the village shifted downhill leaving the church isolated .Consequently in  1840 a new church dedicated to St Michael and All Angels was built closer to the centre of Broadway.

What you may find strange is the new pews which fit in very sympathetically with the old church and were installed when the old ones were damaged by a major flood, difficult to imagine on a fine day but floodwaters poured down off  the escarpment that you came down from and into the church..

You can then take the road down to Broadway, though there are a couple of footpaths on your right, which will take you into the centre of the village.

This is a walk of two hills and spectacular views. 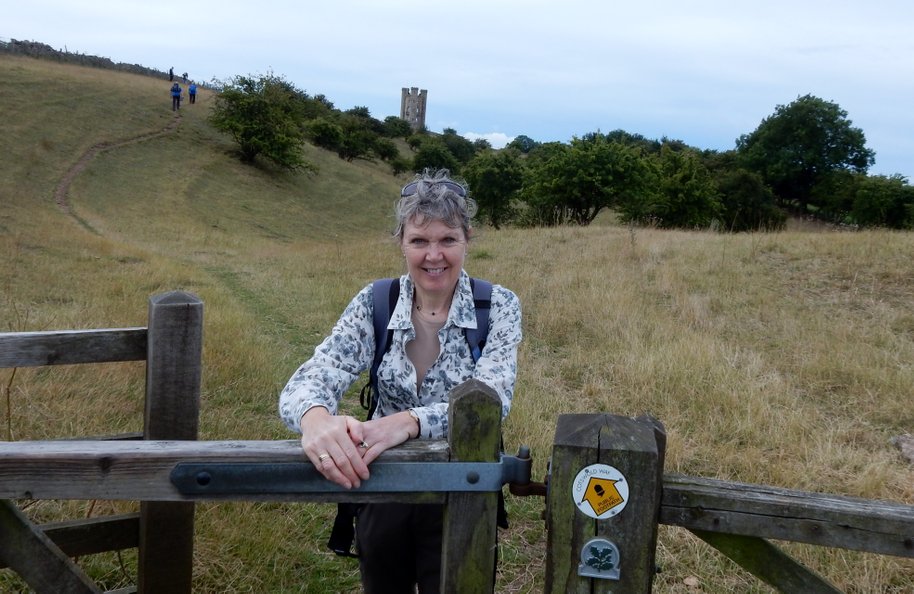 On the way to Chipping Campden

As you approach the village, the walk takes you up Dovers Hill (signposted) and its magnificent views over the Vale of Evesham.

You will also see reference to Dovers Hill Olympick Games, the Cotswolds answer to the Olympics, held every whitsun, bizarre but great fun

A picnic here is a good option or  descend into the village, where there are a wide range of eateries ranging from sandwich bars to full restaurants.

Chipping like Broadway relies heavily on the tourist trade and the old Market Hall  built 1627 in the centre is a main attraction.. 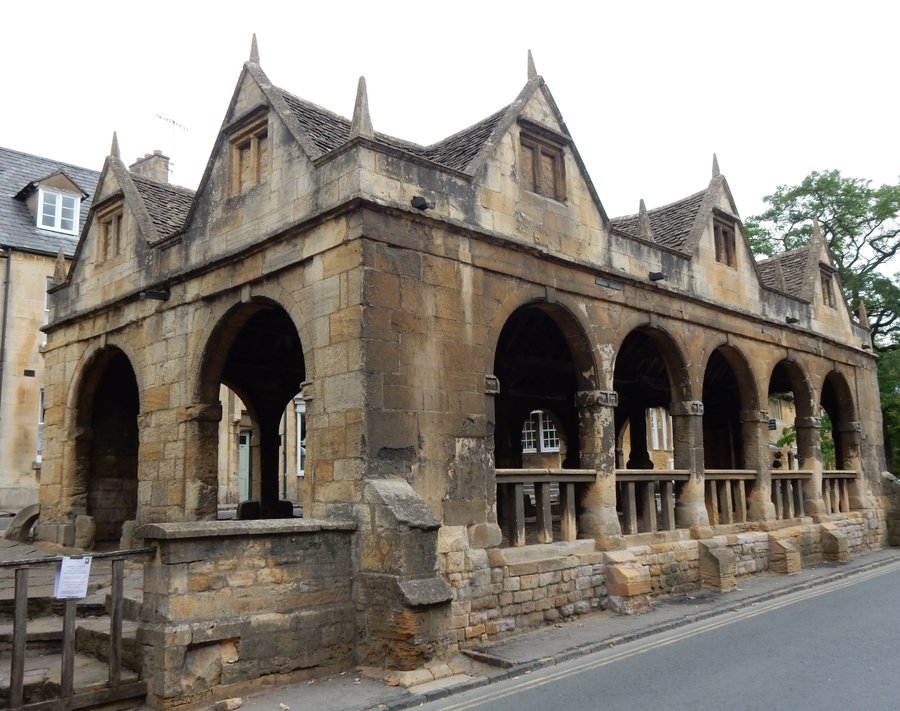 Other attractions include the medieval church of St James with its grand  grand early perpendicular style built on the wealth of wool and the town’s prosperity and fine buildings were built on the wool trade.

The Court Barn near the church is now an Arts and Crafts  museum with a section on William Morris.

Nearby  Campden House, built by local wealthy silk merchant Sir Baptist Hicks was destroyed by fire during the English Civil War and all that now remains  are two gatehouses, two restored Jacobean banqueting houses, and Lady Diana's gateway. The two banqueting houses were restored by the Landmark Trust and it is possible to stay in these two properties.

If you do not fancy the walk back you can catch a bus but you will miss a double dose of the Cotswolds; we did it n the rain and it was still wondrous.

Snowshill - a walk to the National Trust Property - about 4 miles each way.

You could drive to the National Trust house at Snowshill in 15 minutes but take this slow route for a full appreciation of the beauty and splendour of the Cotswolds, as you climb out of the village and then follow the ridge to Snowshill. This truly is England’s green and pleasant land.

Leave the site and walk towards the village and take the road to Snowshill.

Cotswold Way is on your right shortly afterwards. Cross the meadow and then climb for magnificent views over Broadway and though you will be coming back this way, the vista is so good you have to take time out and savour it. 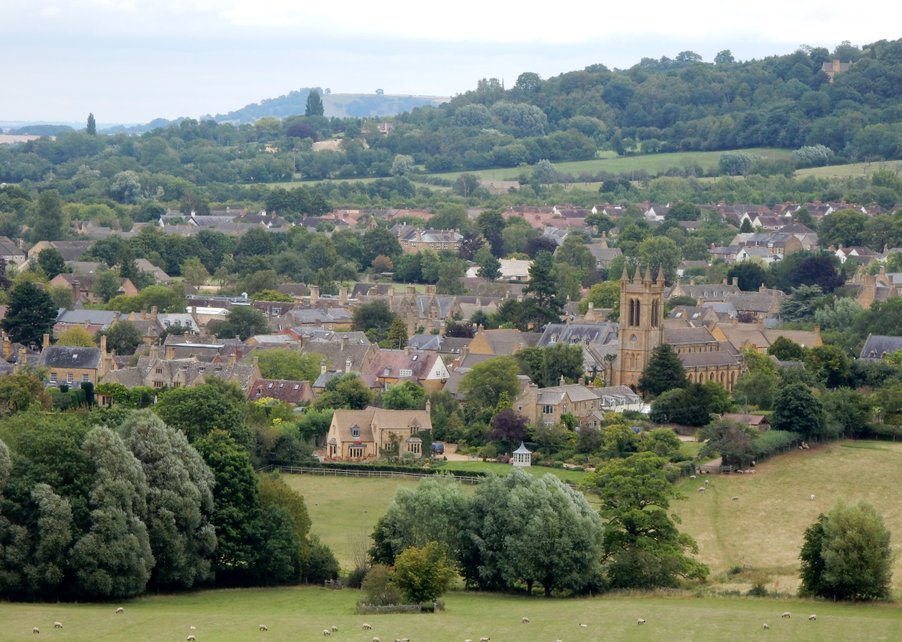 Continue to follow the Cotswold Way until you see a sign for Snowshill at Manor Farm and then take this byway which eventually turns into a paved road but d not worry you are unlikely to come across any vehicle or anyone for that matter.

Continue to the next farm, which is Brockhampton Farm and on the way appreciate the views over the valley and of the village of Snowshill.

At the farm take the footpath on your left and descend into the valley and climb up the other side to the village and then turn left towards the National Trust House. 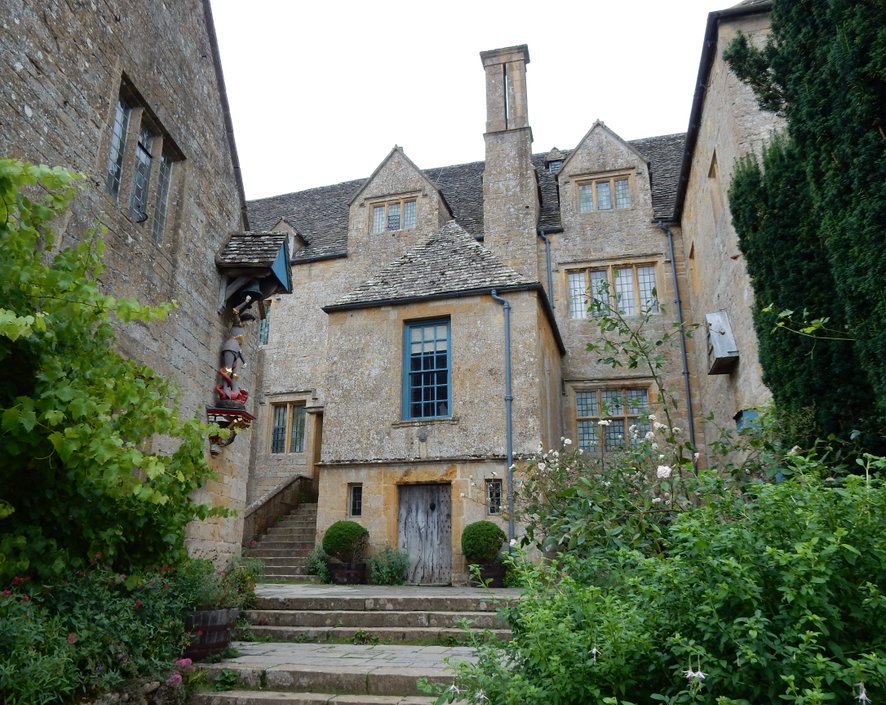 Lunch can be taken at the excellent Snowshill Arms

Or at the National Trust

The National Trust refer to this house as being unique and that must be the biggest understatement out, I would call it bizarre. It houses an eclectic collection amassed by the previous owner, Charles Wade in a beautiful house, parts of which date to Tudor times and the bulk of the house to the sixteenth century.

There is evidence that there was an abbey here which predates the existing house by 500 years or so.

Add in the Priest’s House and the attractive gardens you have a great day out before you retrace your steps back to Broadway.

The way back gives you the double whammy of treating yourselves to the glorious Cotswold scenery again with the added advantage that for most of the trip it is downhill. 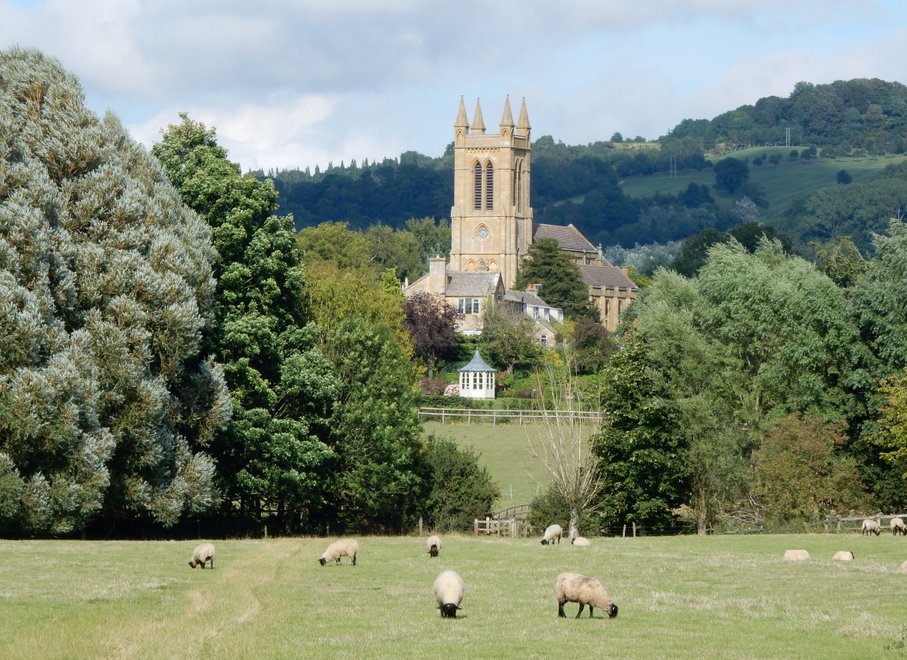 St Michael and All Angels

This is an excellent restaurant with quality food, well prepared and excellently presented with first class service.

We would recommend the fixed price menu which gives a good choice at a reasonable price for food of this quality.

The fish and chips restaurant attached is reputably of a good standard so Russells offers quality for all budgets.

This site offers excellent facilities and is only a short walk to the village.

The site occupies what was once part of Broadway Station, a goods wagon and quasi station signs give you a good clue and one of the old station sheds houses the ‘Wanderer’, one of the earliest touring caravans. I must confess when the warden mentioned it when I checked in, I did not have a clue what she was talking about, I thought it might have been an old railway carriage or similar. It was incredibly beautiful but I would not swap it for my motor home.

Whilst staying on the railway theme, plans are well advanced to extend the Gloucester & Warwickshire railway to Broadway, making the site even more attractive. As nothing remains of the original station they had to rebuild the new one from scratch.

Broadway is the quintessentially Cotswold village, all honey coloured stone  and being firmly on the tourist route it can get busy with day trippers but come 5 o’clock and the village can be yours, as it is safely returned to the locals. As for many places  traffic can be a problem and it is certainly busier when I first stayed in Broadway, at scout camp, some fifty years ago when life was at a much slower pace  but pick your time carefully and you can mitigate against the effects of the 21st century.

What, however, is true is that on the walks, though you will not experience solitude, you will nevertheless not be inundated, meeting enough people to enjoy the passing of the day and the opportunity to enjoy the superb Cotswold scenery. As expected there will be some climbs but nothing too arduous.

All walks start on the Cotswolds Way, which runs through the High Street.