Our objective was to visit the megaliths at Carnac. There are a whole variety of sites that you can choose in the vicinity and we decided to pick Camping Le Kervilor, just outside of  La Trinité Sur Mer and what an inspired choice. Firstly the campsite  (ACSI)was very quiet and had hedged sections, one of which we had all to ourselves and it had excellent facilities. Secondly it was approximately a half hour walk from La Trinité Sur Mer and given the superb weather we had, it was a very pretty harbourside town, You really could not ask for more. Thirdly  it was in easy cycling distance of the megaliths at Carnac and in fact it was a superb base for cycling. Cycling the area is a great way of discovering the megaliths, as you can discover and get close to the smaller areas of stones, other than the main sites at Carnac.

On the first afternoon we walked down to the very attractive harbourside town, where there is a bakers, small supermarket and fresh fish stall (later in the day) We then took the walk around the headland, 'Sentier des Douaniers', which understandably is a popular walk, as you follow the coast all the way around, with stunning coastal views. You can take the road to complete the loop but we cut across the headland, to follow the coastal path back. 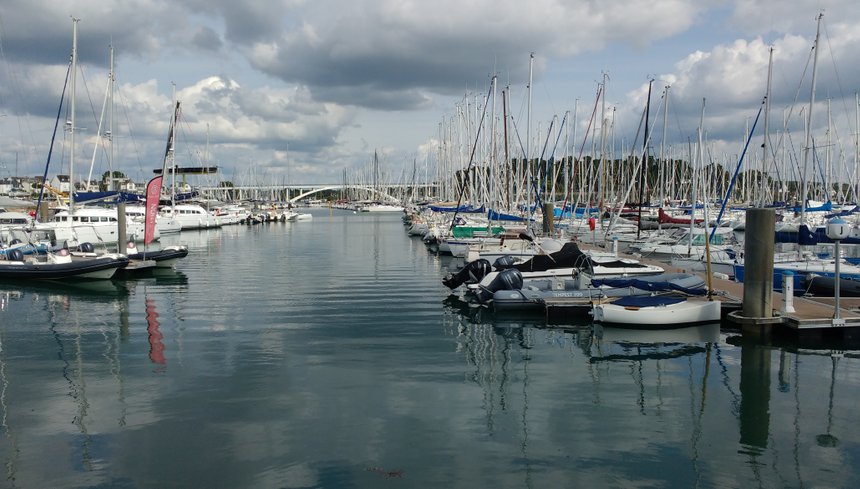 We turned left out of the campsite and cycled to the Alignements du Petit – Menéc , wheeling your bike through these and then picking up the main road and the Alignments de Kerlescan. Come of the road again, on a rough track to Le Géant du Manio, a large menhir or standing stone and beyond that is Le Quadrailatère.

Back onto the road and continue to the main site and easily the most impressive, the Alignments de Kermarle. In the middle is an old windmill which you can climb and this provides an excellent overview.

In the peak months and September is included, the only way you can see the stones is on a guided tour. Well consider our surprise when we arrived and found that the gate was open and to get up close and personal to the stones, without crowds of people was sheer heaven. Shortly after a local official turned up and asked us if we could leave and she explained that the gate had been left open by mistake. When we returned later, however, for lunch at the picnic site, the gate was still open and in fact the fence was down as workmen were preparing a new access road. There is a superb dolmen or burial site in the corner by the road.

You continue along the road until you reach the Alignments du Menéc. There is a path to the right side of the megaliths, which strictly speaking is for pedestrians only but as there were not any, we felt vindicated in cycling this path. We returned by the main road, passing the ubiquitous Petit Train and the visitor centre, which other than the very informative boards outside gave very little information.. We returned for a picnic at the Alignments de Kermarle.

We then took the Chemin de Kerluir, opposite the parking, with the aim of finding the Chapelle St Michel and given we were only using a tourist map I was quite pleased to find it. 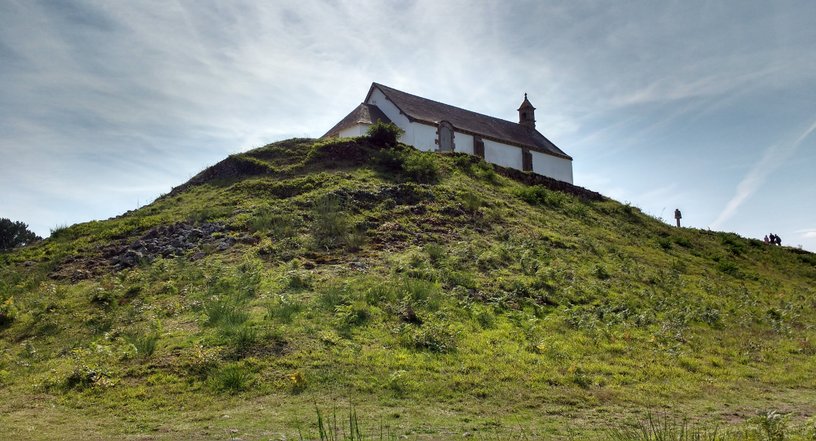 We then followed our nose and dropped down past the hotel at the chapel site and headed towards the main square and church in Carnac. We headed out of down towards the coast via the Chapelle de St Colomban., following the Circuit de Colomban on the tourist map. We then headed towards the coast but had to back track, as that section of the coast was for pedestrians only. When we arrived back at the church, we took the Avenue de la Chapelle which took us to Plage de St Colomban. We were then able to follow the coast all along until we reached  La Trinité Sur Mer.

On our final day we decided to cycle  across the road bridge, Pont de Kerisper and turn right to discover the Locmariquer peninsula but not before picking up lunch at the bakers in  La Trinité. We only had the road map as reference and the fact that we knew there was a megalithic site at Locmariquer.

The first part was straightforward, as you follow the coastal road, which in September is fairly quiet and the roads are wide. We deviated off the road at Plage de Men er Beleg to explore the Pointe de Men Er Beleg. Strictly speaking some of this was a footpath but there was no-one around. We then took the quiet coastal road up to Chapelle St Philibert, the most beautiful setting than you can possibly imagine. It was so beautiful that we saw it in the morning at low tide and then came back in the afternoon at high tide.  It was built in the seventeenth century for the fishermen and  in a building on the shore is a board which explains the history of the church.

Heading into the village we discovered a cycle route heading towards Locmariquer and nearly followed it all the way but towards the end we descended down the main road into the town. After a picnic lunch on the quayside, overlooking the Golfe du Morbihan we decided it might be a good idea to get a map, so of we trotted to the tourist office. France is interesting, as every small town has a tourist office, which in fact is incredibly useful, if you do not really know where you are going.

Before heading off to the megalithic site, which was the main purpose of our visit, we headed down to the Plage de La Falaise and another fine dolmen on the coast. These are basically burial sites and in the past would have been surrounded by earth. 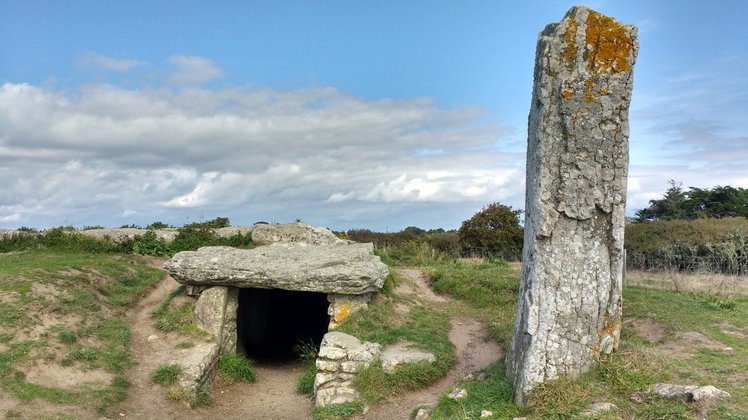 Back into town and onwards to the megalithic site and as we were leaving the town a large bus of German tourists also left and guess where they were going. We had to hope that they would have finished before we arrived on our bikes. We need not have worried as the first thing you do is watch a film in English about the history of the site and by the time we had done that and read the legend boards, it was time for them to depart. In fact the site was remarkably quiet, there were a couple of tours but you could easily avoid them.

The conclusion of the visit was that this is a magnificent site and combined with the coastal scenery and the added extras such as the chapel at St Philibert,  This was a grand day out.

We, however, had not quite finished and rapidly coming to the conclusion that a map was extremely helpful, we headed to the bay at St Pierre Loperec. Climb the sand dunes from the car park  and you are on a superb beach, Plage St Pierre. Through the village and heading north, we picked up the cycle path back to Saint Philibert and then the coastal road back to Pont de Kerisper and  La Trinité. 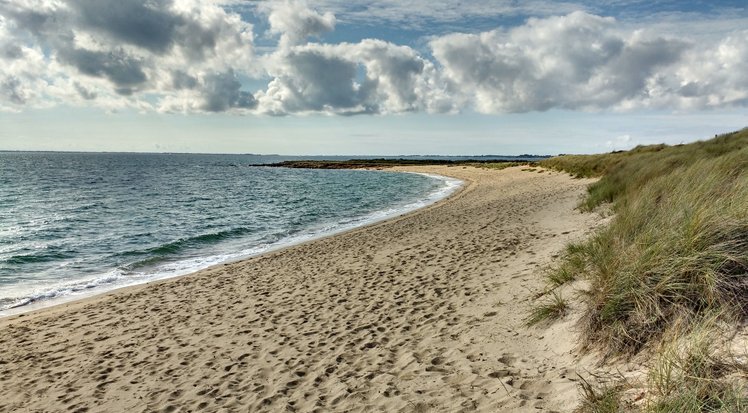