It has an air of exoticism about it which is not replicated anywhere else on the south coast. 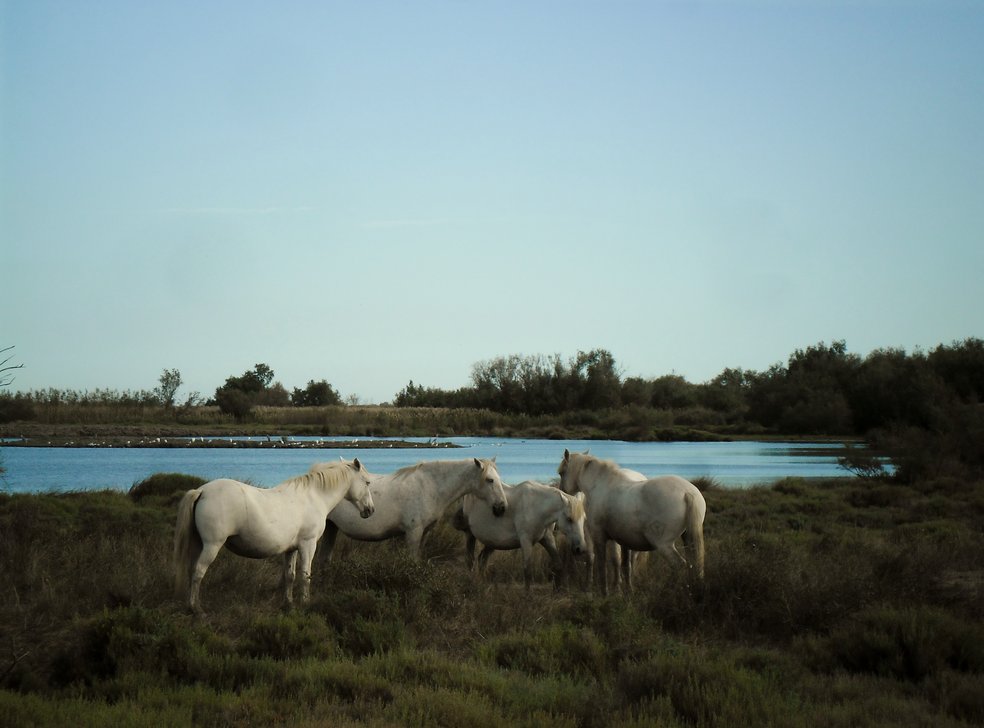 We based ourselves at Les Saintes-Maries-de-la-Mer which is ideal for a motor home tour of the Carmargue and as the Carmarque is flat, it is  an ideal  base for exploration by cycling.

The town caters superbly for motor homes with designated parking areas for motor homes, together with two aires, one on the east of the town and the other on the west.

The one on the east of the town is closer to the town but does very much resemble a car park, though more intrepid motor homers head towards the beach area along the Dique a la Mer and thus avoiding the fees for the official aires, which at 10 euros a day are on the high side.

The one on the west, looks newer and more spacious, probably as a result of it being about a kilometre outside of town but there is a very pleasant walk or cycle route into town.

There are two campsites, hardly surprisingly one on the west of the town and the other on the east, both near their respective aires.

We stayed at the Clos du Rhone, it does have direct access to the beach and we found it perfectly acceptable.

So it is a question of paying your money and you take your choice, though I think for the 5 extra euros a night (off season)  for electricity, hot showers and more space then the sites win over the official aires.

Les Saintes-Maries-de-la-Mer was originally a fishing and farming village. Fishing still takes place but it is tourism that is now the dominant activity. The town has a population of 2,500 which rises to some 50,000 in the peak holiday period.. It is unashamedly heavily commercialised but  somehow still retains a charm and attractiveness that may not be present in similar seaside resorts.

St Tropez it is not and many would say thank goodness for that. It is an honest, perhaps old fashioned resort, where ordinary people, perhaps one might say real people come to enjoy the sea and the sun.

It has a large open square with a superb market on Mondays and Fridays and there is nothing more satisfying than getting local fresh produce followed up by a visit to the fish stall by the port for local fresh fish. This is much more fun than a trip to the supermarket though the town does have one on the outskirts, on the D85A, within easy cycling distance.

The Church ,which dates back to the 9th but was  fortified in the C14th against pirates, previously t was the Vikings and Saracens that attacked the town. 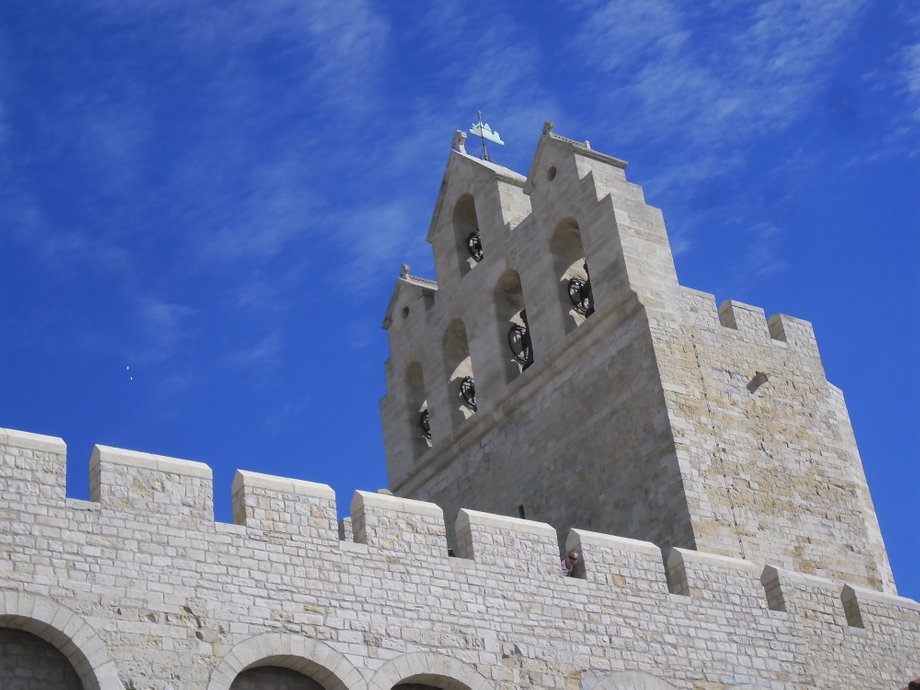 The church contains the statue of “Black Sarah”, venerated by Roma Gypsies, who gather here every year (May 24-25) for a religious festival.

The pilgrimage provides opportunity for Europe's Gypsies who are  largely drawn from French- and Catalan-speaking communities to  meet and affirm their faith and culture, and at the same time have a jolly good time.

This legend of St Sarah dates back to the 16th century when Sarah who was the servant of  St Marie-Jacobé and St Marie-Salomé, who allegedly arrived here  with Mary Magdalene from  Palestine, either by design or accident and hence the name of the town .

Every year they take the statute from the church by horseback into the sea and a young gypsy woman is chosen to represent Sarah.

The tower is worth climbing for the panoramic views  of the surrounding area from the roof  and only costs a couple of euros. Though it does seem somewhat surreal, when you are below and you can see people clambering over the roof.

There are numerous ways of exploring the Carmargue, Horse back riding is a popular activity and every where you will see the ‘promenade du cheval’ . 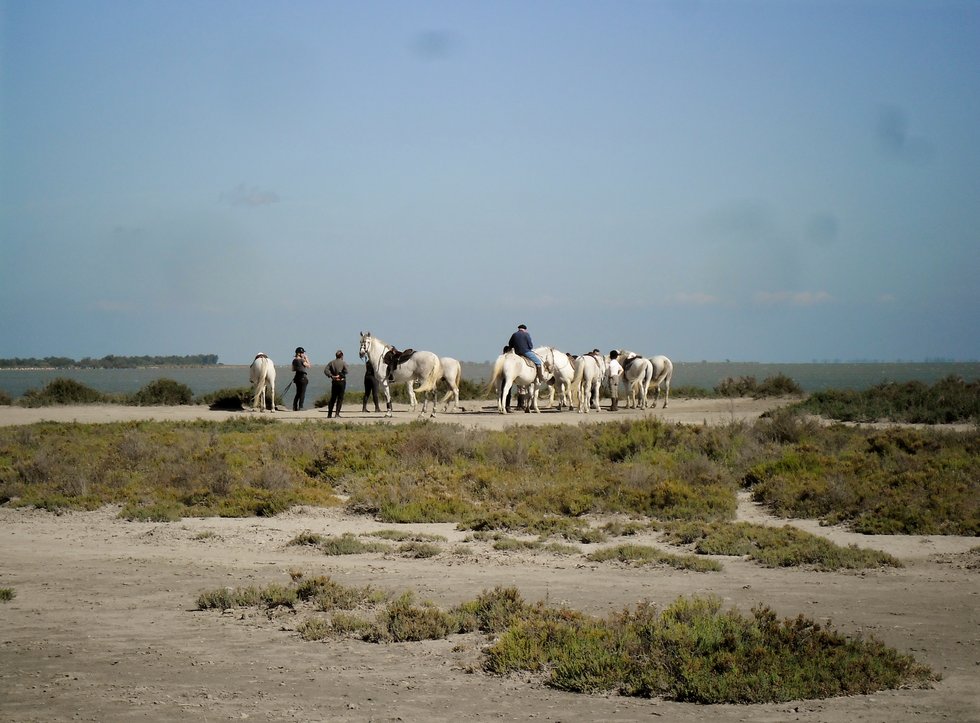 An alternative is to take one of the boat trips that depart from the port or alternatively the paddle steamer Kon Tiki which departs from the Petit Rhone just up from the campsite ‘Clos du Rhone’ . You will not miss the trips from the port as every morning, if you walk into town, you will run the gauntlet, as you will be encouraged to take the boat trips, quite politely I might add. They are quite reasonably priced at about12 euros a head for a 2 hour trip. The boat will stop to allow you to take photographs of the black bulls, wild horses and the wildlife and will tell you the stories of the Guardiens, ‘cowboys’ of the Carmargue. 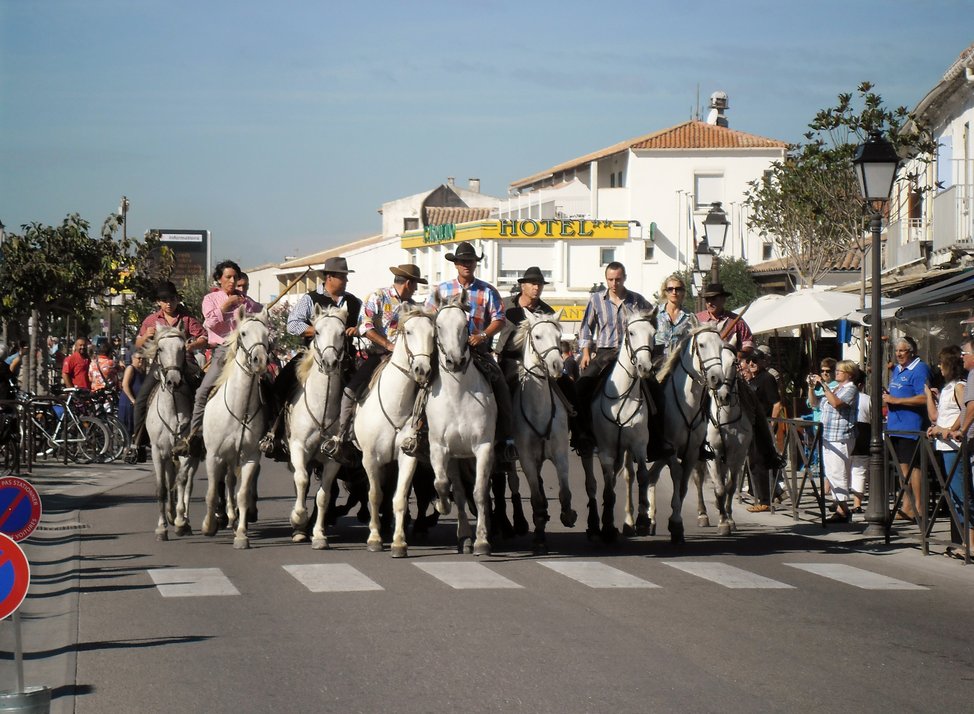 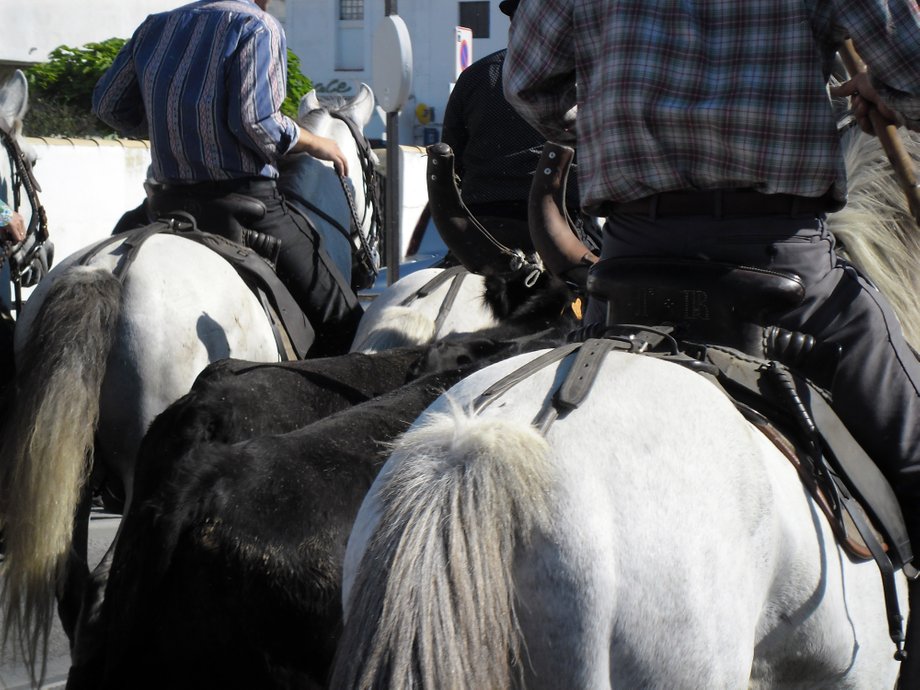 They will also tell you about “la course Camarguaise”: the French version of ‘bull fighting’ which is very popular in Langquedoc, where men try to pull tassels and strings off the horns of wild bulls in an arena.  We are not great believers in using animals in sport but you often see the bulls leading the chasers a merry dance and at least they are getting their own back. 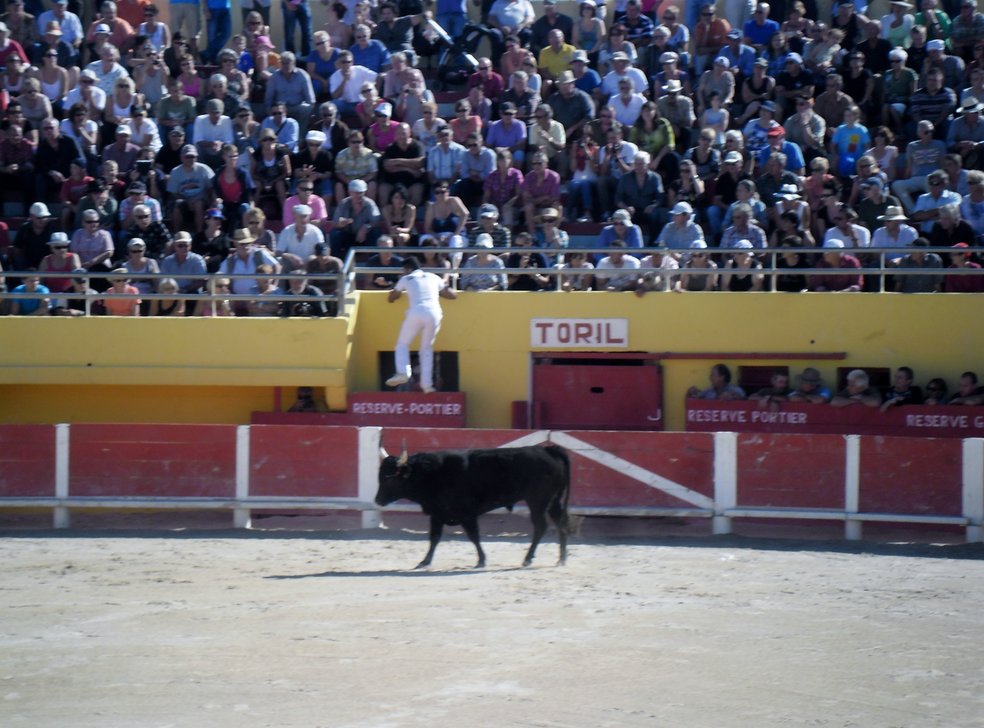 It is also possible for the more macho minded to take quad bikes or even a 4x4 safari but we chose the more sedate method of using our bikes.

The first stop is the tourist office to pick up the leaflet ‘Carmargue Naturellement’ which gives a list of walks and cycle routes.

The ‘daddy’ of them all is a 70km circular route around the ‘Étang de Vaccarès’ but this was about 15km too far for us so we concentrated on the Dique à la Mer. This is an attractive ride which follows the road out towards the east, past the ‘official’ aires when it then converts into a track between the sea and the etangs so it gives a great feel for the Carmargue. You will need an ATB bike or at least a hybrid . It is not a difficult ride, though you will have to dismount in places because of the sand. 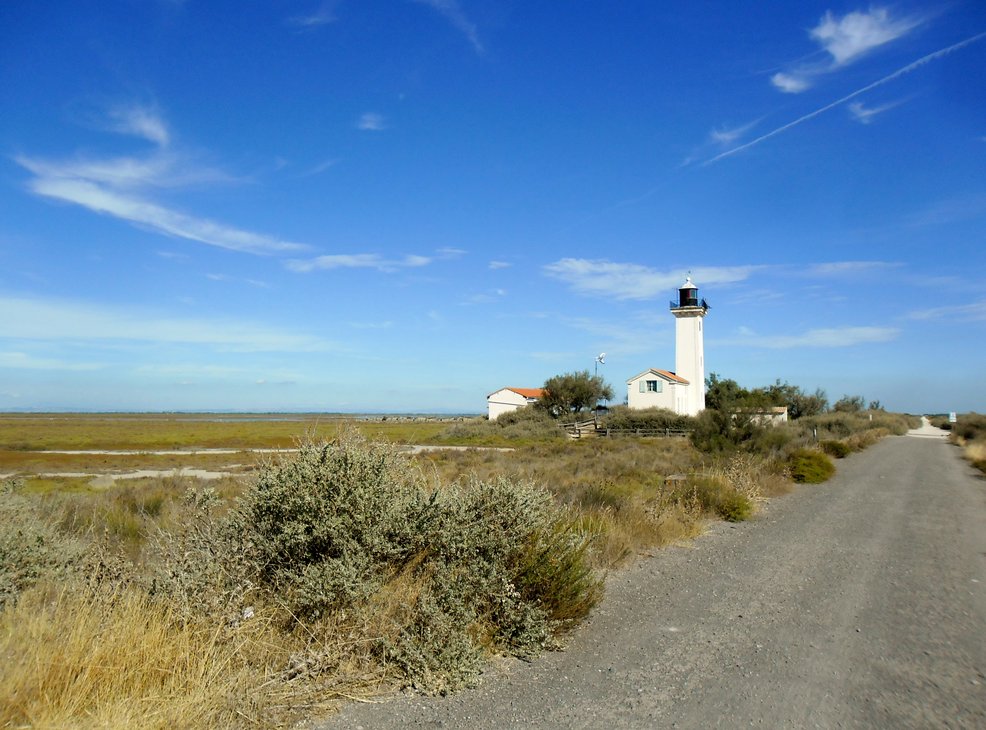 After the lighthouse, ‘Phare de La Gacholle’ (above) it is worth going on for a short distance as you then literally cycle between the étangs.

We also took the route from the town, following the D85a out before you take a track on your left and head towards Méjanes. This route gives you a much better mpression of the marshes and at 30km round trip is slightly longer than the Dique à la Mer but in our view the Dique ride is more enjoyable. 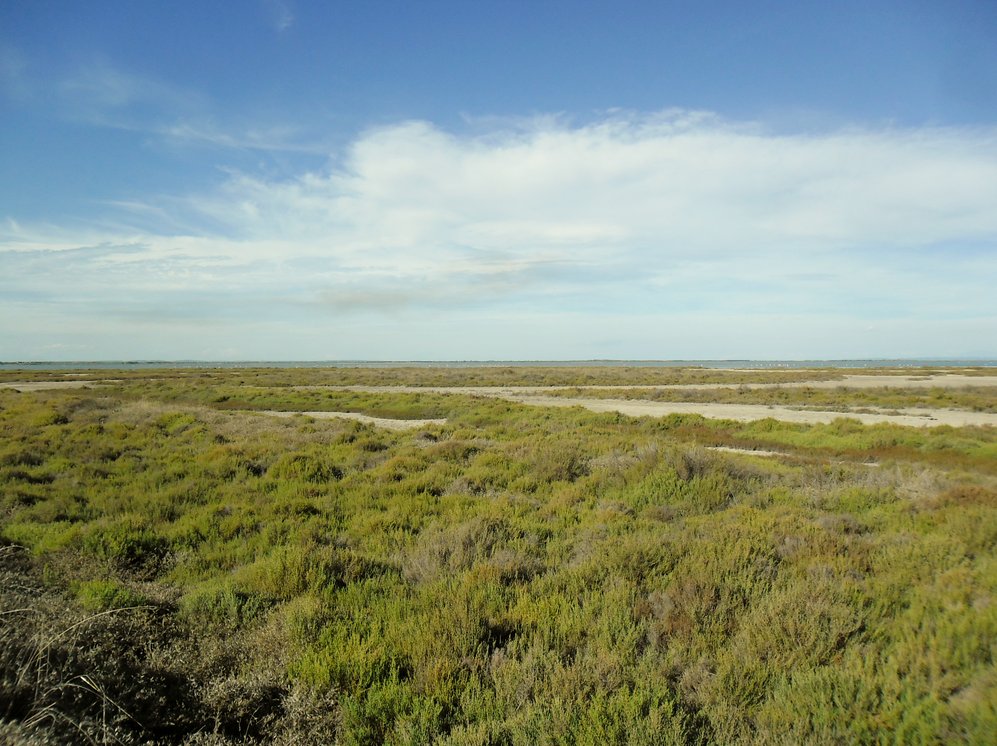 If you want to get up really close to flamingos then the Parc Ornothologique offers you this opportunity to see them in a more manicured environment though we promise you there will be no shortage of the ’Grand Flamingo’. We did hesitate before going, as generally we like to see our wildlife ‘au natural’ but we did have a very enjoyable afternoon. There is a ‘wild’ section as well to walk around and it was in this part that we had a 20 minute uninterrupted view of a perched marsh harrier. Also what could be more enjoyable than returning to have a drink at the bar overlooking flamingos having a barney. 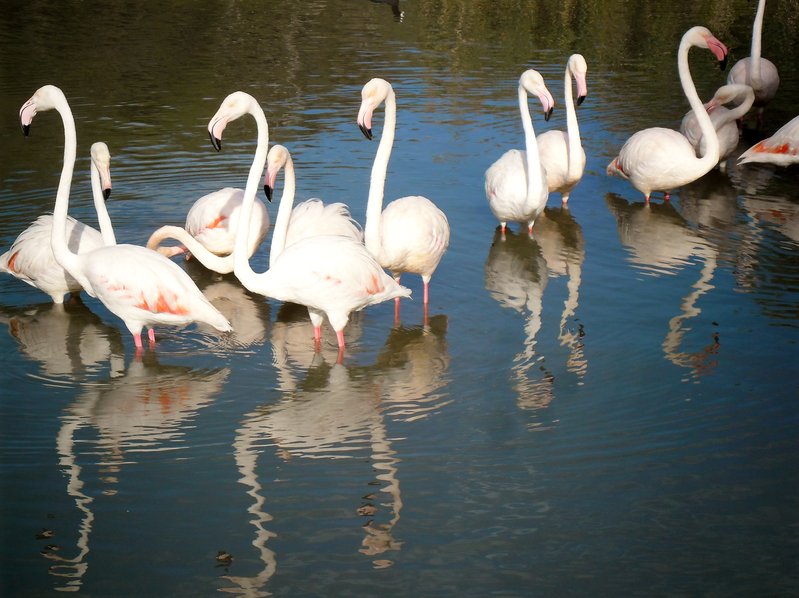 It is an easy  10km round trip and you can also build in a visit to the Bac de Sauvage, which is a chain ferry across the Petite Rhone which you can cross for free. 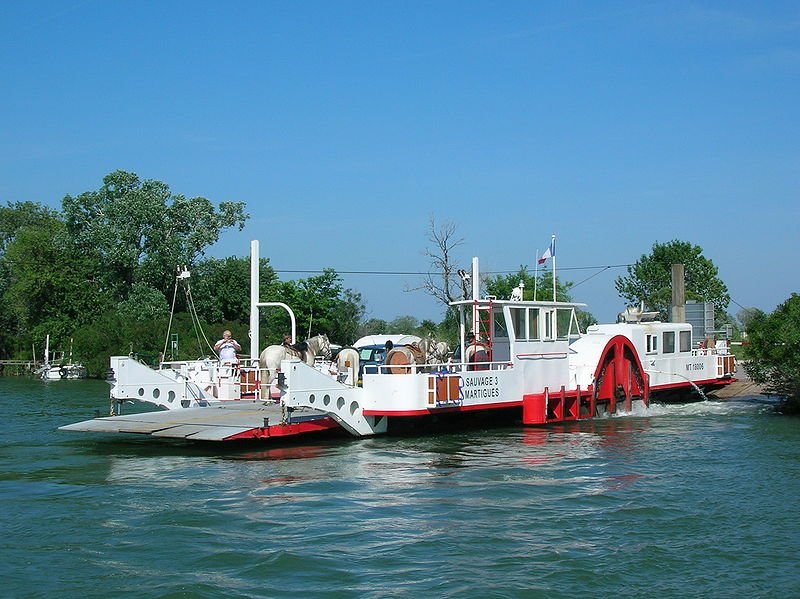 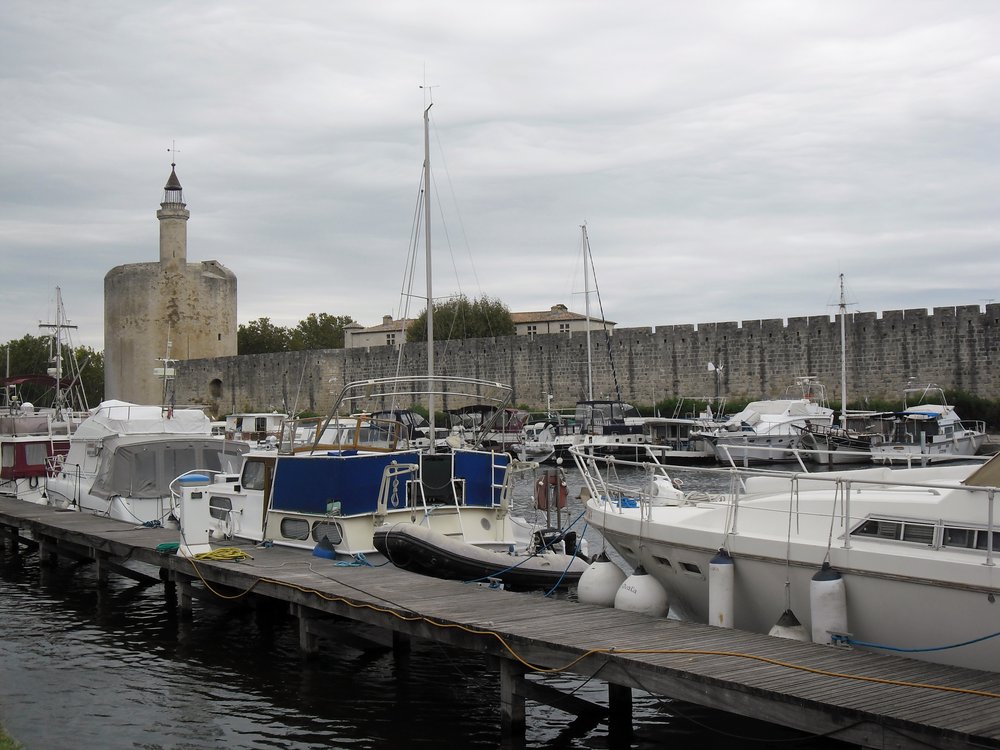 We wanted to visit Aiques Mortes, not just because it is one of the most stunning walled towns that you will find in France, but for reasons of nostalgia. Last time we visited I had a very enjoyable lunch with my father in law on his birthday, not long before he died of lung cancer  and after two bottles of Listel we had to summon Julia to take us ‘home’. Julia had been ‘babysitting’ our 3 year old daughter with her mum but this time she joined me for old time sake, for lunch in the beautifully atmospheric town square. She did, however, restrict us to half a bottle of wine this time, even though all we had to do was walk to the aire on the outside of the walls.

The aire at the Rue de la Port was hideously expensive for an aire, 16 euros per night,

fully exploiting its part monopoly position but luckily for us the barrier was broken, so we gained free entry. 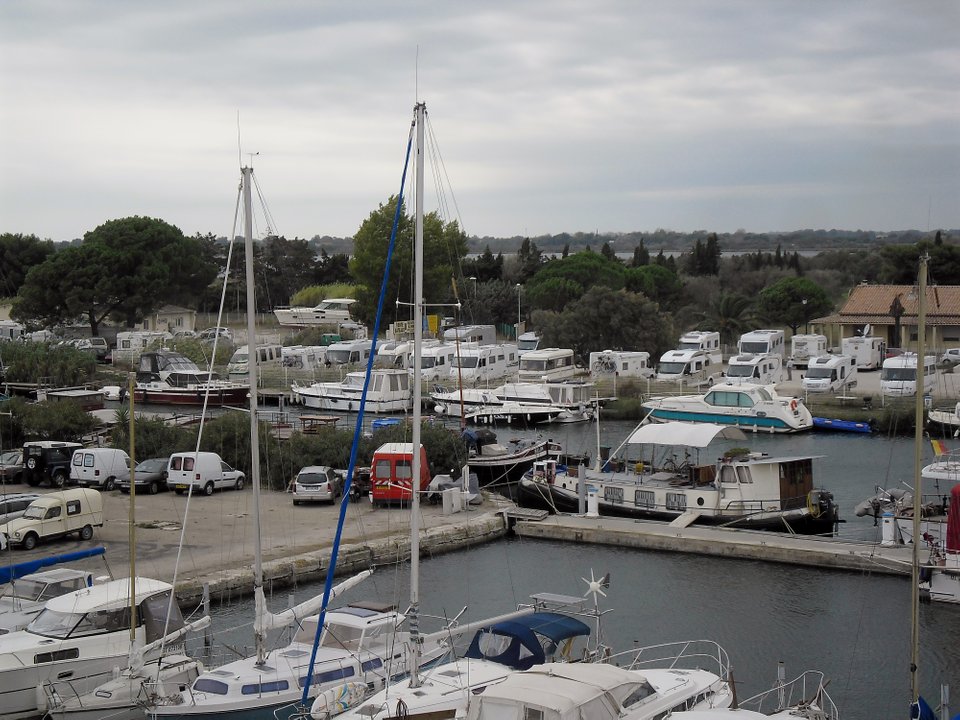 The aire at Aigues Mortes, from the city walls

Aigues Mortes.,in mediaeval times  was an old crusader and trust me it was on the coast, though perhaps one should not have got too excited about its description as a port. as facilities then were somewhat basic.

Since then, the Rhone delta has silted up, and Aigues Mortes is five miles inland, where it rises up outside the marshes like some sentinel with excellent views from the ramparts of the surrounding marshes and the Canal du Rhône à Sète, which connects the Étang de Thau in Sète to the Rhône River in Beaucaire,At the Etang de Thau, the canal connects with the Canal du Midi. 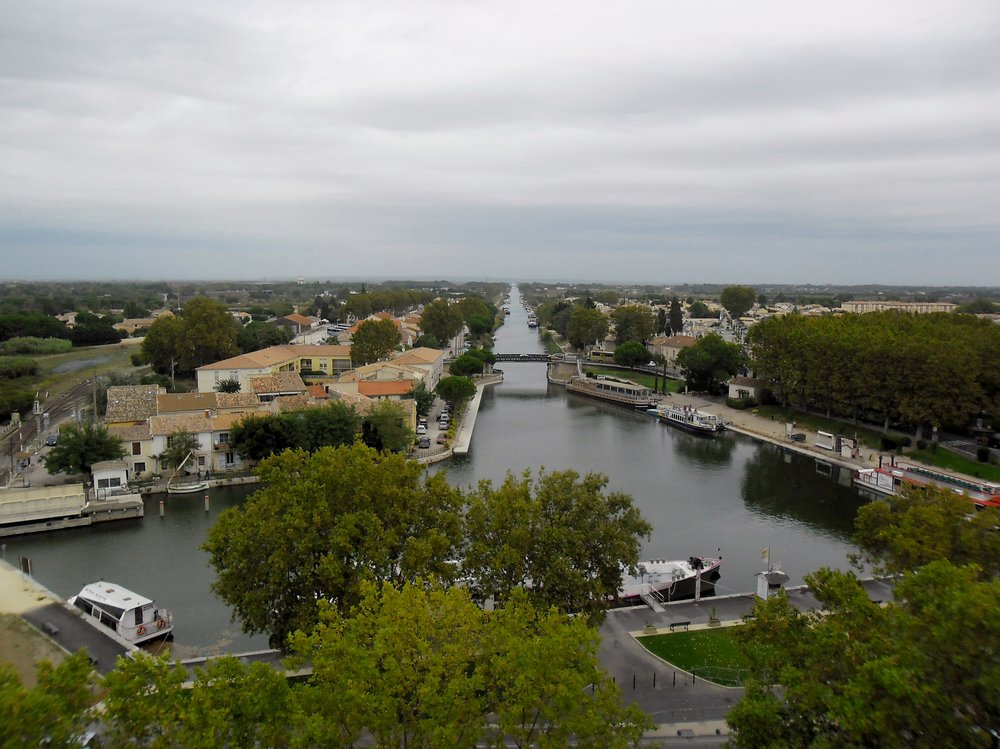 It is a must to walk round the old city walls, which are largely intact from medieval times and your visit will also include entrance to the Constance Tower. (below) 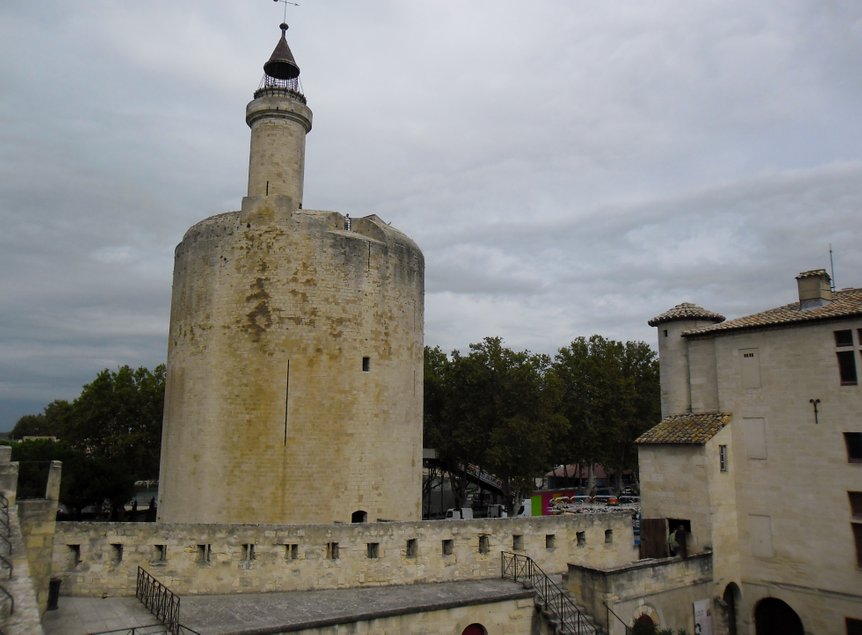 We also enjoyed floodlit views of the ramparts from the aire.

Aiques Mortes was  built by Louis IX , whose statue adorns the central square, in the 13th century . In the 16th and 17th centuries it became ‘safe haven’ for persecuted protestants, but was eventually used as a prison for protestant ‘Huguenots’. There is a harrowing story of a woman, ‘Marie Durand’ who was imprisoned for 38 years before finally being released in 1768. 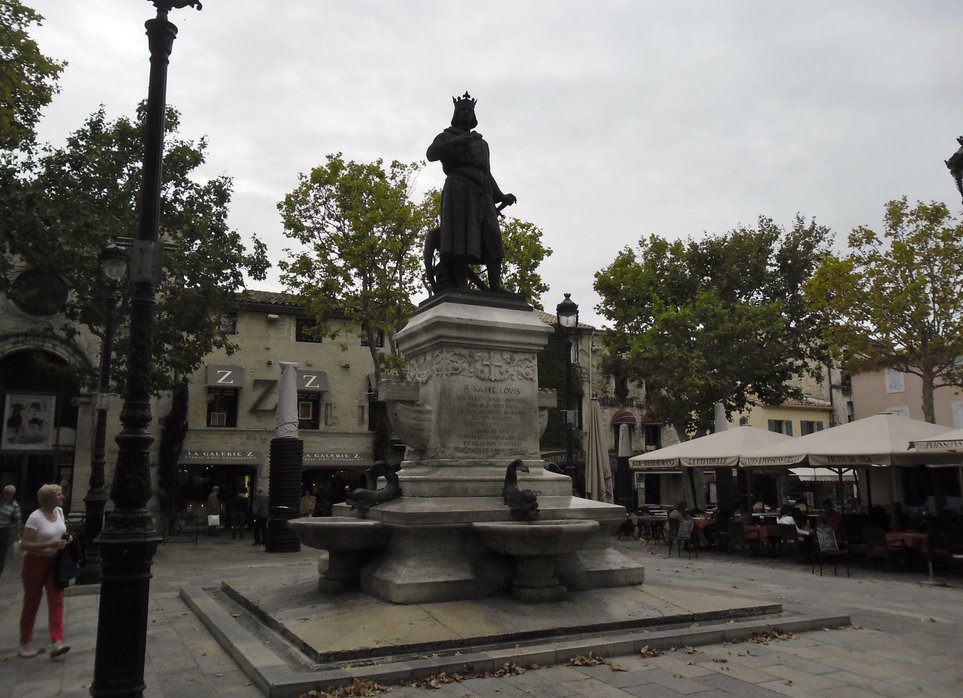 I wonder how many other stories those walls could tell as you relax and enjoy lunch in the main square.

A note on mosquitoes.

Be prepared, particularly if you visit in high summer, when they will be at their most  voracious and it can be very hot.  Remember that this area is basically a swamp but at least unlike in Crusader times there is no malaria. You will also be plaqued by flies. In late September, early October we did not have a major problem but the reality is that if you live in t shirts and shorts for a month, some sort of bug is going to have a nip at you. Make sure you use your fly screens and even then the pesky blighters could sneak in. As it cools  down then they will be at their most active. This did not stop us eating out at dusk or breakfasting in the morning but we ensured we had long trousers and shirts at these times. The alternative is insect sprays.

But bottom line is do not let this put you off visiting a fantastic area.