On crossing the River Minho we followed  the N13 down to its estuary, along the coast to Camping Cheque Vila Prai de Ancora, which incidentally is no longer a Camping Cheque site & I can not find any reference to the site now, which is not really any great loss.

The facilities were fine & the guy who showed me the pitch could not have been more helpful, but it is not a place I would hurry back to. My judgement perhaps was clouded by the fact that there was a howling wind, which made walking on the beach, directly accessed from the campsite, very unpleasant and at times it was like walking in a sandstorm It took several days to remove the remnants of sand from the van.

Respite could not really be offered by moving inland and though we lost the sand, the hinterland was not too attractive, primarily being turned over to small scale market gardening with poly tunnels evident everywhere. Nowhere near as bad as the intensive poly agriculture on the Costa del Plastico near Motril on the Spanish coast but this is the price we need to pay for year round salad crops. Needless to say it was not our favourite site.

Next day we thought we would go to Viana do Castello, as this seemed  an interesting place but the campsite was at Darque,the other side of the river so we gave up on that one and decided to go on to Vila do Conde and Camping Parque de Campismo Sol de Vila Cha. Firstly, however, we decided to crack the payment system for the electronic payment on the motorways so we picked up the motorway and as previously stated, it could have not been more simple.

Having sorted that, we moved back onto the N13 to see Povoa de Vazim, big mistake, the motorway would have been more interesting. A really non descript place and we had plenty of time to savour, as we were reduced to a snail’s pace by the myriad of traffic lights.

The reception at Vila Cha was excellent, they were undoubtedly geared up to the fact that most motorhomers were using it as a base for visiting Porto. Also no qualms about the fact that we arrived well before 11.00, simply because I had not realised that Portugal kept the same time as the UK, so we had gained an hour, a fact that was not realised until we saw the railway clock at the Metro at Mindelo station. Just imagine the scene in the UK if you turned up this early at a Caravan or Camping & Caravanning Club site, it doesn’t bear thinking about.

The motorhomes for the one night stays are pitched, aire style so do not expect a lot of room but we were prepared for this and additionally not unreasonable and bear in mind that it is only 14 euros a night, ACSI rate, and the sanitary facilities, though a little tired are fine and spotlessly clean.There is also a motor home service point.

The advice given at reception to get the best from Porto was second to none and they will also arrange a taxi to take you to Mindelo station,at a cost of 6 euros to catch   the train into Porto.

The campsite also has a small shop, which is reasonably well equipped, particularly with fresh produce and is not unfairly priced either.

There are a couple of good restaurants on the coast.

Tip Either take the campsite  phone number or agree a time for him to pick you up for your return journey.The campsite will give you a print out of a map, though I had printed one from google, showing the way back from the station to the campsite. The walk, which is about an hour, would not phase us but do not attempt this walk in the dark . The locals hit the cobbled streets with some venom and little consideration appears to be given to pedestrians.

Once at the station you will need to get an ‘Andante’ ticket covering 5 zones, similar to an Oyster Card. The journey to Trinidade Station is about 40 to 45 minutes, the modern trains run every 20 minutes and if you are lucky you will get one that does not stop at every station.

Once in Porto, the advice given is to walk down, crossing the river, visit the port caves, lunch and see the main sites on your return but the reality is that the city is compact enough to tackle as you wish.

You can lunch at the restaurants that line the river before you cross it, and though they are very atmospheric, we took lunch at Ar de Rio on the other side of the river Douro for an excellent simple lunch of soup, fish and dessert, a glass of wine for less than 30 euros for the two of us. This is not Michelin starred food but if you want a good value lunch, excellent service and superb views over Porto, then this fits the bill.

Though we had a bried wander into the port houses, these really are not our thing,time was also pressing, though there are plenty of options to a full tasting or a tour and a couple of glasses.

Onto a leisurely wander around the city.

We could not, however, leave the city without partaking in Porto’s most famous export so we made a visit to the opulent Café Majestic for cake and vintage port, a very civilised way to end a visit to a  charismatic and attractive city 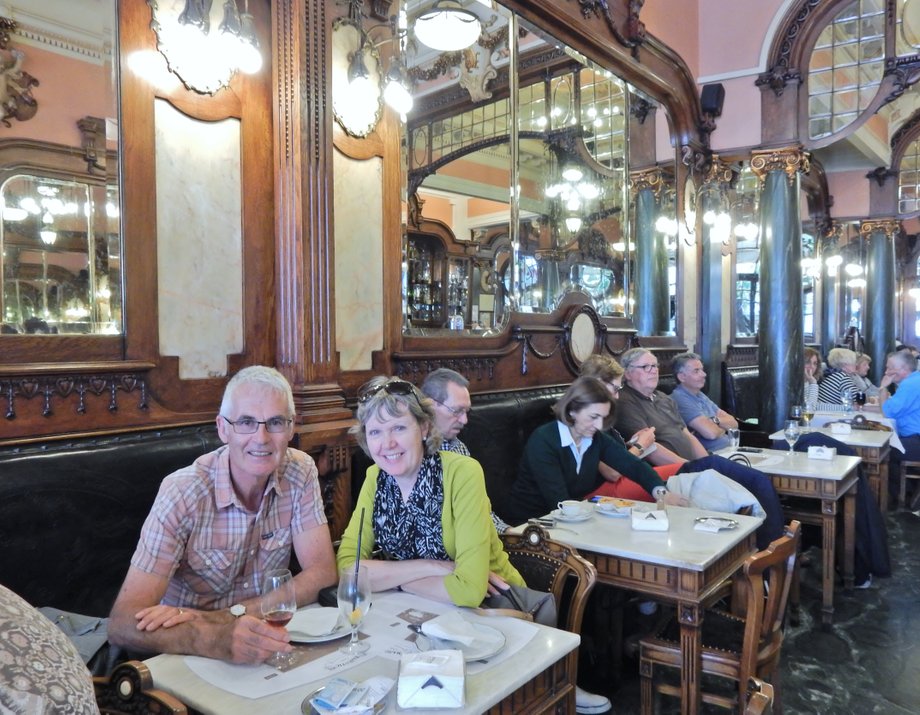