After a week’s chill out in the Cabo de Gata, we turned the motor home north to another world heritage site, Toledo. Our expectations were high and they proved to be justified. Toledo has a long history, dating back to the Romans, to be followed by the Visigoths and then the Moors.

The town was one of the earliest to fall  to the christian conquest in the late 11th century, During the 16th century, Toledo served as the capital city of Castile and the city rose in prominence but when the Spanish court was moved, first to Valladolid and then to Madrid, its importance  began to dwindle ,to be rekindled  in the late 20th century, when it became the capital of the autonomous region  of Castile–La Mancha. Its economic decline was a two edged sword because it  helped to preserve its cultural and architectural heritage which you can witness today.

Realistically you can not comfortably do the trip from Cabo de Gata to Toledo in one day, so we stopped at Santa Elena, Camping Despeñaperros, conveniently situated close to the A4.

The town is,with apologies, relatively non descript but the campsite is pleasantly situated in a pine forest, with views of the surrounding countryside, water and drainage on the pitch, a motor home service point and with free wi fi and at 16 euros on the ACSI scheme, represents excellent value.

It is, however, an excellent base for exploring the Parque Despeñaperros, which has some excellent walks and stunning ravine scenery but that has to wait for another day.

Sendero Barranco de Valdeazores is a 13km walk that leads to some of the most attractive places in the park. It starts at Km 246 on the A4, on the southbound carriageway, 200m from the Restaurante El Jardín de Despeñaperros. The path follows the Valdeazores ravine (barranco), through woodland of pine trees and holm oaks, up to a viewpoint with superb views of the barranco.

In Toledo we based ourselves at the  Camping El Greco which charged 30 euros for a night, and this includes free wi fi, not an untypical charge for a city centre site. What was a little odd was that they charged extra for the use of the swimming pool, nearly 4 euros.

Otherwise you can not fault this site, it is in an attractive setting with shaded hedged pitches, it was spotlessly clean,  with a friendly reception and  a pleasant bar with superb views of Toledo and only about a mile from the city centre.

There is a bus from the top of the site but it is easier and more flexible to walk. The walk up the tree lined drive is very attractive but the walk along the busy road , very much less so but you soon reach the modern bridge and then the magnificent views of Toledo.

A short walk takes you to the imposing Alcantara Bridge, of Roman origin and an awe inspiring entrance into the town. 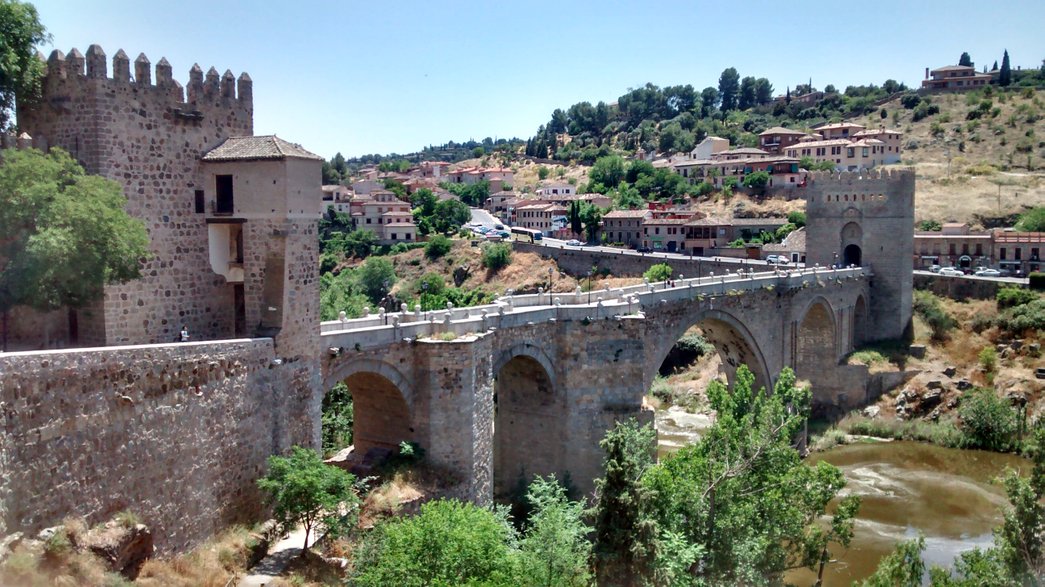 As always the only way to explore the narrow alleyways of  this town is on foot , though perhaps somewhat uniquely, they are not devoid of traffic and the locals do seem to hit these streets with a gay abandon and oblivious to tourists. This town is definitely on the tourist hit list, more evidently than say Salamanca or Burgos but it is still possible to avoid the crowds.

TIP Buy a ‘Tourist Wristband’ which at 8 euros, allows you access to all the main sites of the ‘ City of Three Cultures’ named after the coexistence of the three religions, Moslem, Jewish & Christian.

With the wristband attached there is no hiding the fact of your tourist identity, though in reality it is patently obvious. 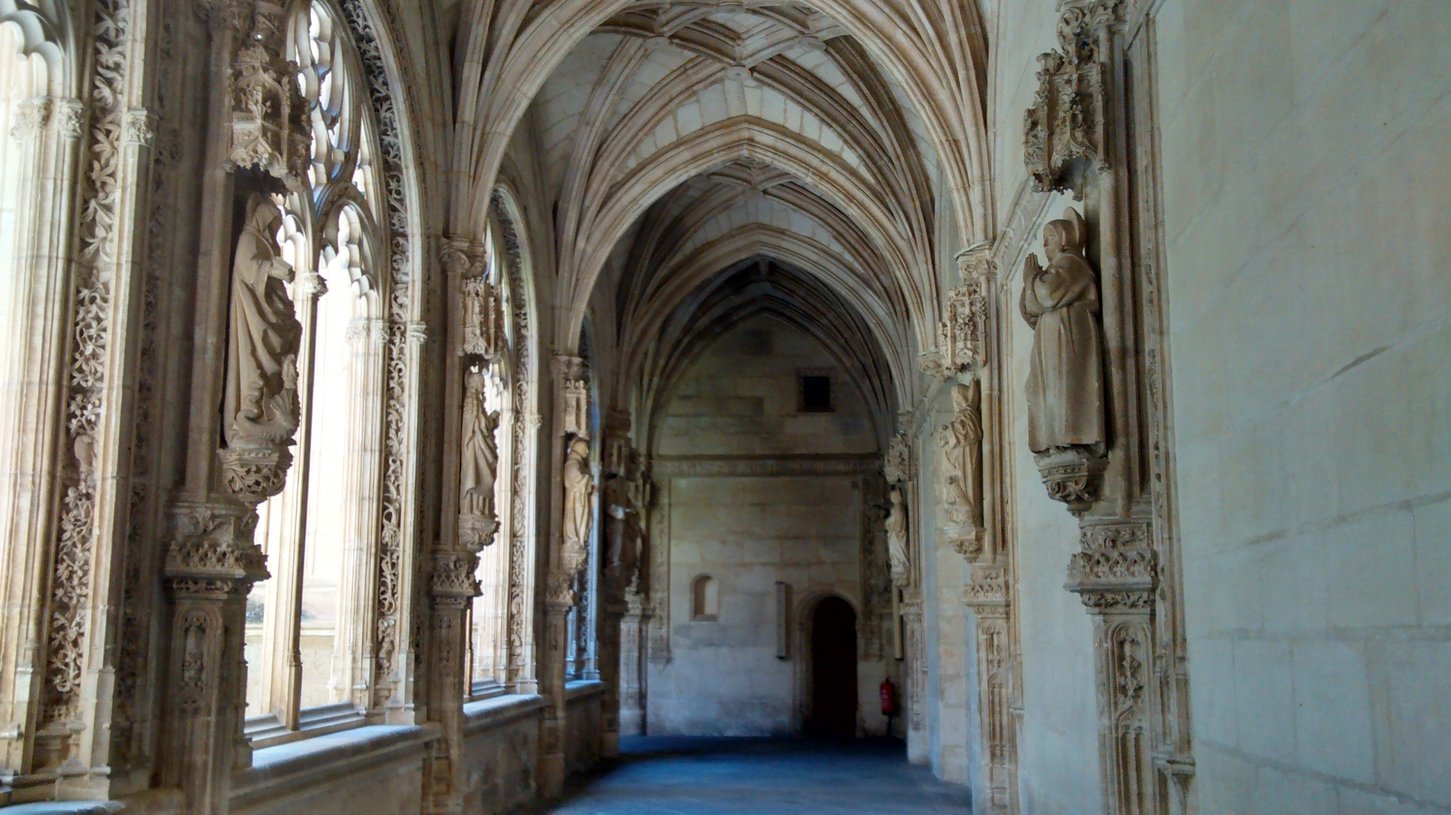 Santa Maria La Blanca Synagogue  (below) was built in the 12th century  but in the 15th century was converted into a church after the expulsion of the jews. 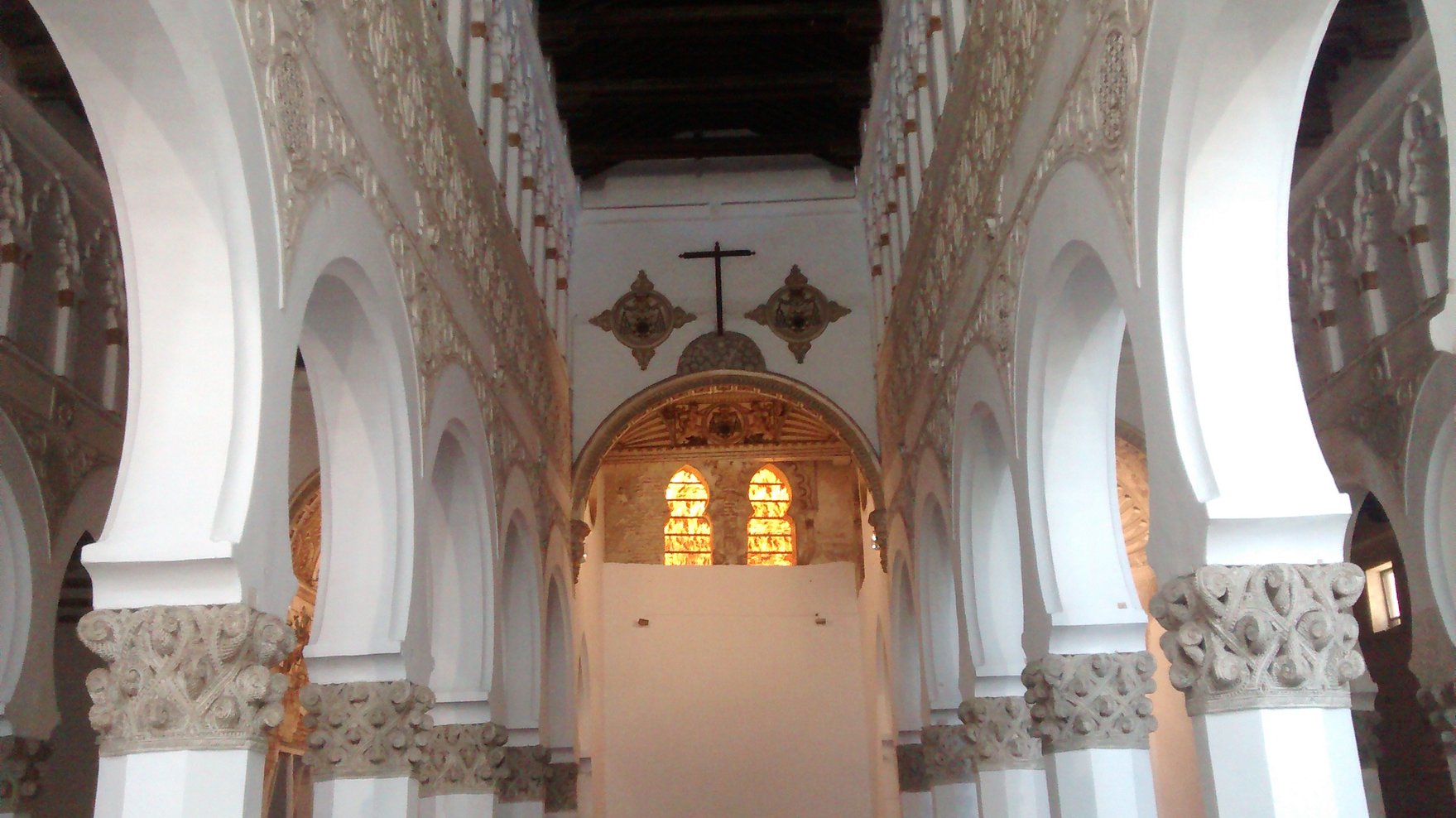 The church of El  Salavador  was originally a mosque and dates back to the 9th century, as befell the state of many Moorish buildings, it was converted to a church in 1159. 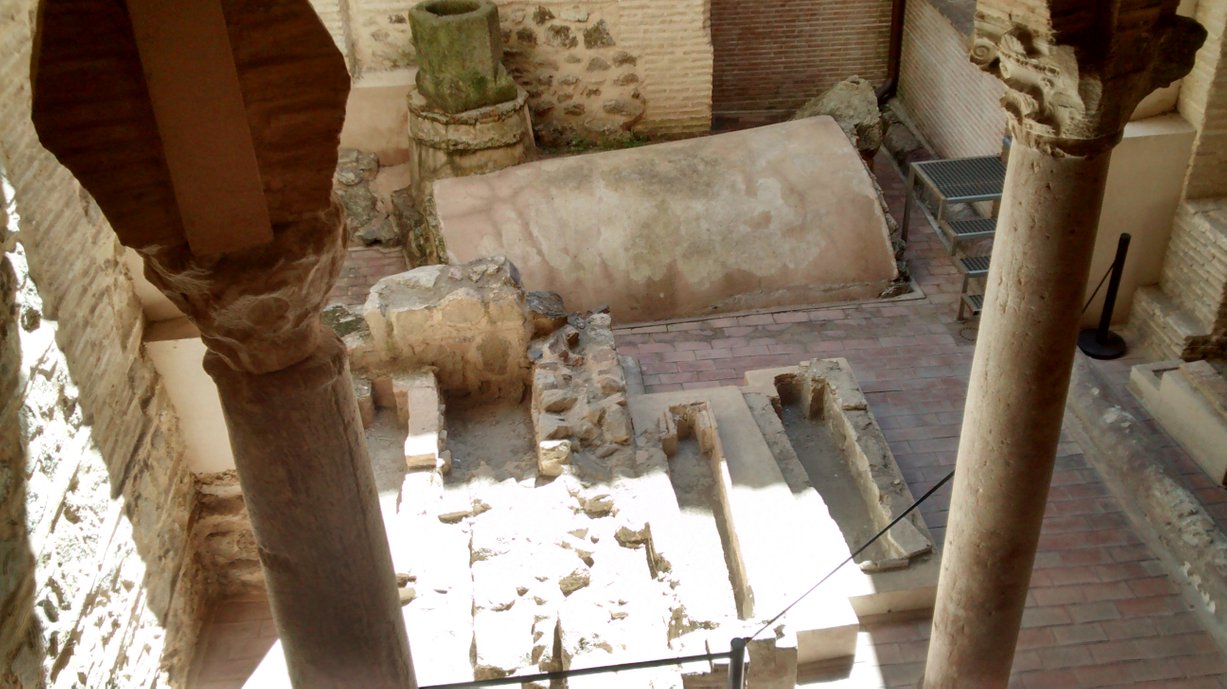 The Church of  Los Jesuitas (below)  dates back to 1569 and is truly splendid  but a big attraction is the climb up to the church’s  towers and  its connecting passageway, which offers superb views over Toledo. 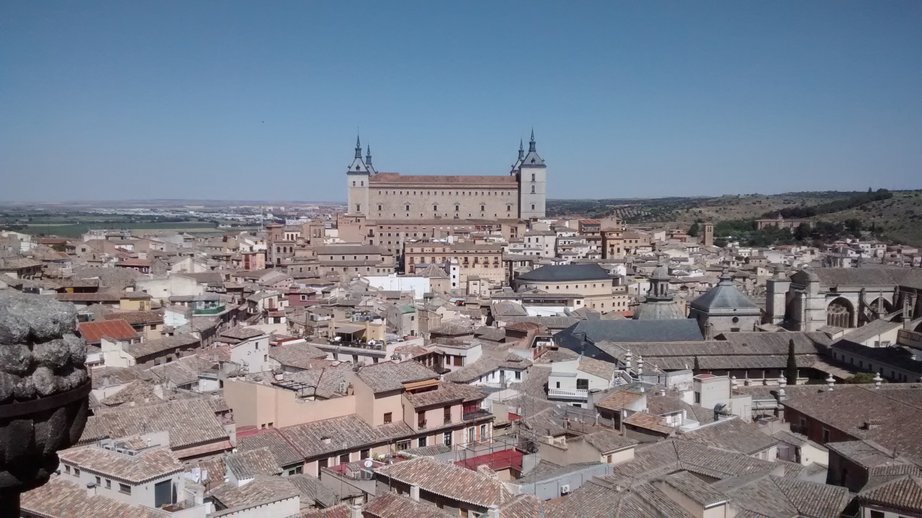 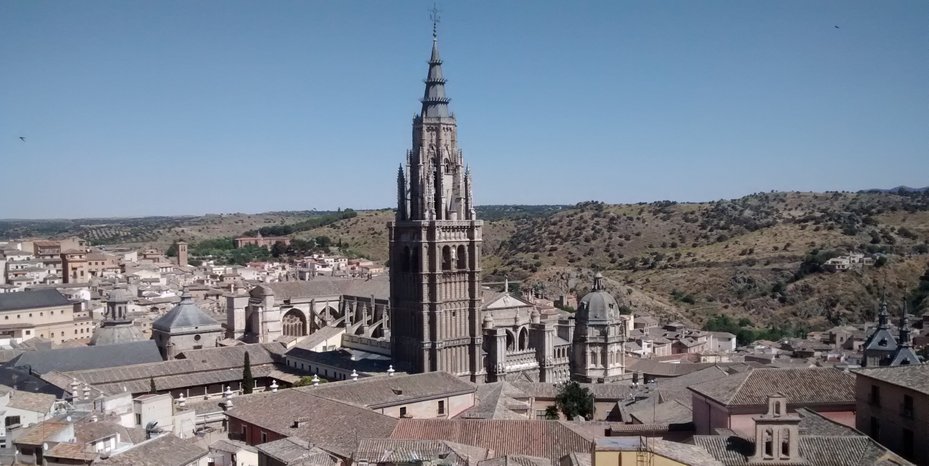 In the background is the Alcazar, which was virtually destroyed in the Spanish Civil War. It was rebuilt and now houses a library

During the Civil War it was held by Colonel José Moscardó Ituarte, against overwhelming Spanish Republican forces. The Republicans took  16-year old Luis, Moscardó's son   hostage, and demanded that Moscardó surrendered or they would kill him. Luis told his father, "Surrender or they will shoot me." His father’s reply was, "Then commend your soul to God, shout 'Viva Cristo Rey' and die like a hero." His father refused to surrender, the Alcazar fell and Luis died.

The  present cathedral was built on the site of a 7th century church and work commenced in 1226 but it was not completed until 1493 and because it was built over such a long time there  is a mixture of French Gothic and Spanish styles.

Despite the cathedral’s grandeur , the building which impressed the most was the Cristo de La Luz, perhaps it was because of its simplicity or the fact that it is the only remaining Muslim building and dates back AD999.

The building is surrounded by a large terrace and beautiful garden and a part of the Arab wall that leads down to the Puerta del Sol and offers fabulous views over the city. 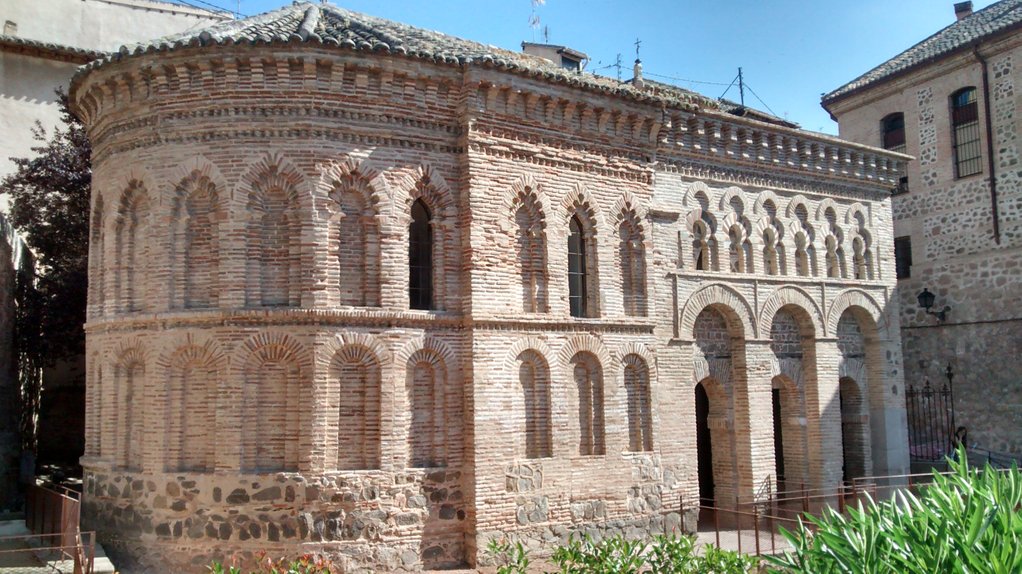 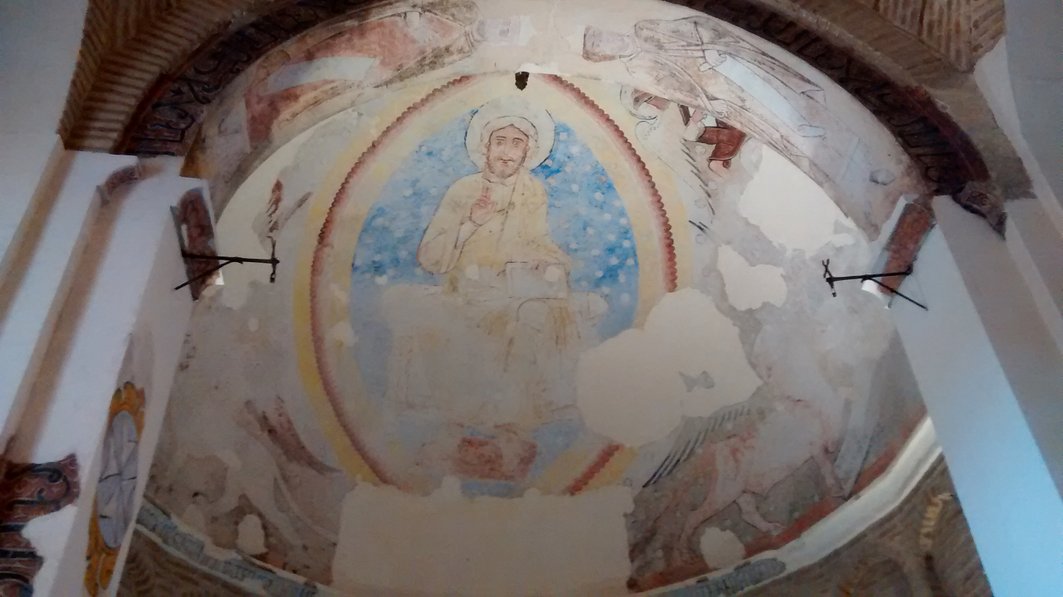 As common with many mosques they were converted into churches and there are some fine medieval wall paintings.

No visit to Toledo would be complete without a visit to the Iglesia de Santo Tome to see El Greco‘s, Toledo’s famous son, picture of ‘The Burial of the Count of Orgaz’. One of the guys at the back is the artist himself.