Connects Bristol with Reading, following the Avon valley and the Kennet & Avon Canal which was designed to connect Brisol via the Avon with London via the Thames.

Don't worry you do not have to do the cycle route in one day and in fact the only section that we have covered is the Devizes to Bristol section and this can be covered in two parts.

We based ourselves in Bath at Newton Hill Park, which is situated just outside of Bath.

This is a very picturesque site situated in a valley with a stream meandering through it .

The site is open all year and we visited the site in March and virtually had it to ourselves.

It is in a great position for the city.

Access to the cycleway is via the gate at the bottom of the site, you cross the playing fields, the main Lower Bristol  road and then turn right .

There is a footpath on your left, which you follow for a matter of metres, and then manhandle your bike up an embankment, and you are on the Bath to Bristol cycleway.

The cycleway to Bristol folows the old railway, cycle route no 4, and was one of Sustrans first off road cycle routes. It tends to be one of the busier well used cycle routes, particularly at weekends.

It is possible to cycle all the way into the centre of Bristol, virtually all off road and there is plenty to do in the docklands area, and of course SS Great Britain is a major exhibit.

It is about a 25 mile round trip, so easily cyclable in a day, with plenty of time to explore and have lunch in Bristol.

On route refreshments can be had at Bilton & Warmley stations, at the former you can catch up with the Avon Valley Railway, and if you are lucky you may be able to cycle with a steamtrain. 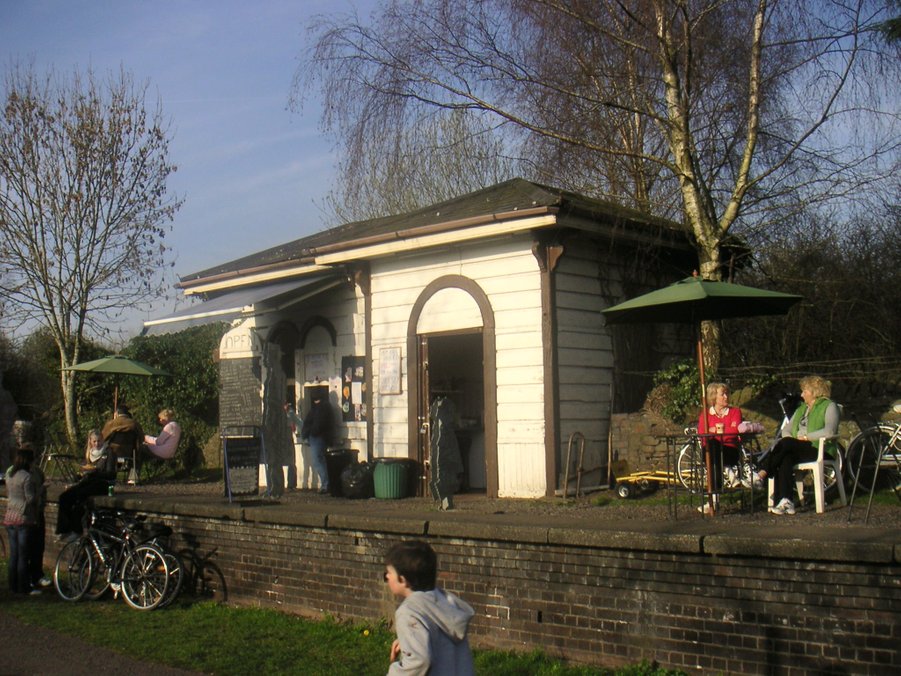 It is also possible in a day to extend your trip and cycle through the docks and pick up the cycle route on the left hand bank of the Avon and  on to Brunel's Clifton Suspension Bridge, a truly spectacular and remarkable feat of victorian engineering. 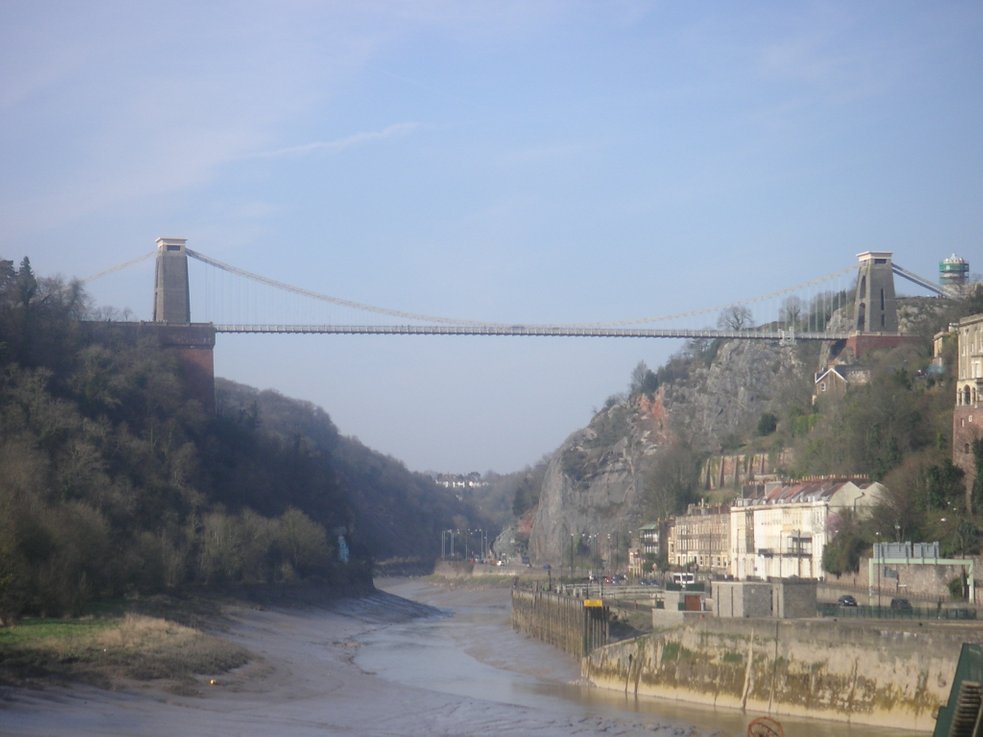 No trip would be complete be complete without a visit to the city of Bath itself with its Roman Baths and spectacular Georgian architecture .

The city is not a World Heritage Site for nothing.

It is also of course home to the famous Sally Lunn bun.

Access to the city follow the same directions as for the cycleway but you almost immediately take a right fork and then follow the River Avon into the city, about a 3 mile walk along the Avon.

Bath to Bradford on Avon

The total trip is approximately 26 miles, allow a couple of extra for exploring Bradford on Avon.

You follow the same route as into the city centre, but this time on your bike, following the Avon, but for a short section you follow the RHS of the river, along the road, as there are steep steps on the riverwalk.

You can see the Bath locks where the Kennet & Avon canal joins the river Avon.

You follow the canal, through the City, with detailed legend boards of the history of the canal.

You leave the city behind and follow the canal to the Dundas Aqueduct,  one of two acqueducts where the canal crosses the Avon, a truly remarkable edifice particularly given its beauty, no functional engineering here.

This section from the acqueduct and to the next acqueduct, at Avoncliff, (refreshments available) in our minds, is one of the most beautiful stretches of the canal, as it follows the Avon, with the river nestling in the valley, below the canal.

It is difficult not to wax lyrical about this canal, particularly given that it was derelict until relatively recently, being opened officially by the Queen in1990.

You continue onto Bradford on Avon which is a gem. It dates back to Saxon times  and is well worth exploring, it is delightful.

The tithe barn close to the canal is stunning and dates back to the mid 14th century, look up to the massive timbered roof, it is awesome.

The Saxon church of St Laurence(pictured below) dates from the early11th century and is one of the most complete examples of its kind, it is truly atmospheric. 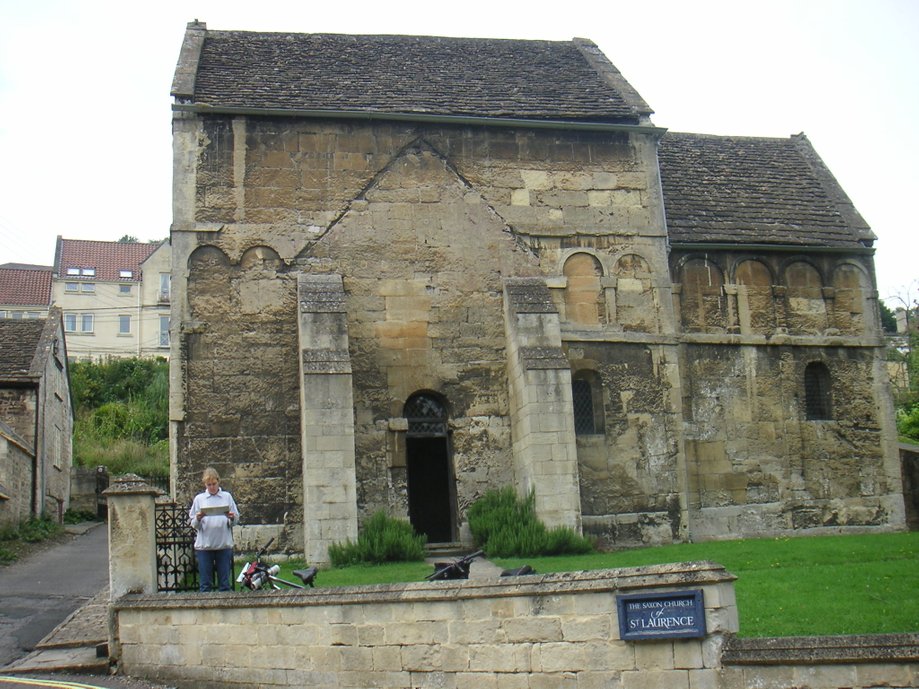 Devizes to Bradford On Avon

Here we based ourselves at the Camping & Caravaning Club site and though it refers to itself as Devizes , it is in fact at Melksham about 4 miles walk from Devizes, along the canal which is literally a stone's throw from the site entrance.

This site is an excellent advocate of what is the very best of the camping and caravanning club  and thoroughly deserves its excellent reviews.

The celebrated Caen locks are on this section of the canal and in our opinion are best appreciated on foot.

The main flight is of 16 locks but in total there are 29 locks before you reach Devizes and they were not fully restored until the late 1980's. 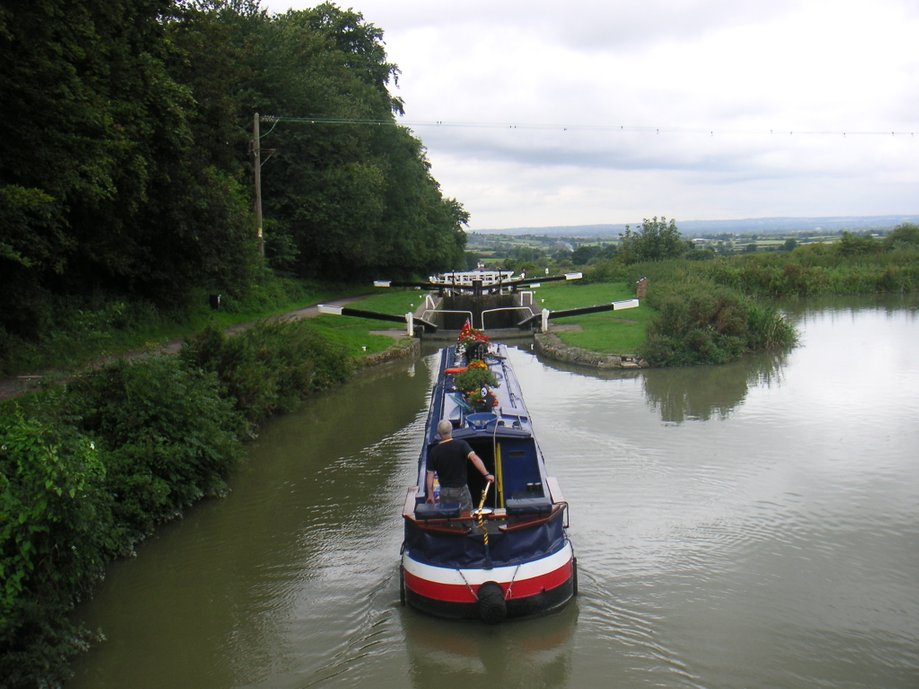 The locks take up to 6 hours to navigate and must be a badge of honour for all canal boat enthusiasts.

I confess here to a pure session of jingoism, when I boasted to a Dutchman, on the Canal du Midi ,at the Neuf Ecluses (a series of 9 locks on this canal, though technically I do not think there are actually 9 now) that we had a canal with a series of 16 locks.

There is a quaint tearoom at the top of the locks and there is also an excellent canal museum when you arrive at Devizes wharf ,and refreshments are available here. Devizes itself is a pleasant market town.

In the other direction from the campsite you can go to Bradford on Avon,which is a much shorter distance than from Bath, a round trip of about 12 miles, allowing for exploring.

It is possible to cycle into Bath which is a good round trip of about 40 miles.

We did this for the first time in February and we were losing light at the end of the cycle.

There are some excellent canalside pubs on the way.