It keeps getting better, aided by the fact that the weather was also now absolutely glorious as we arrived at Salamanca, one of Spain’s, if not the finest example of Renaissance and Plateresque architecture.

Not content with having one cathedral, it has two, the old twelfth to thirteenth century Romanesque one, which is entered through the later new sixteenth century one. 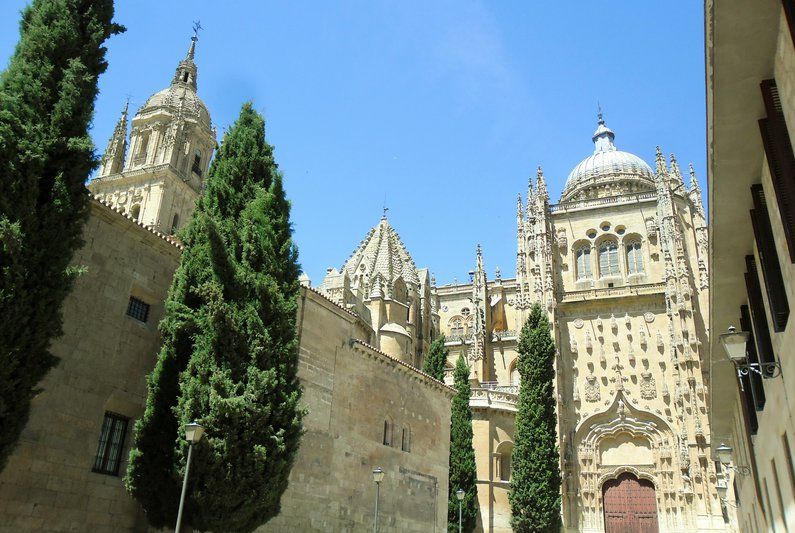 It also has a Roman bridge with 15 of its original 26 arches remaining but do not ask me which ones. It is well worth walking over the bridge to get a full view of the cathedrals and in any case it is a pleasant walk  through antiquity. 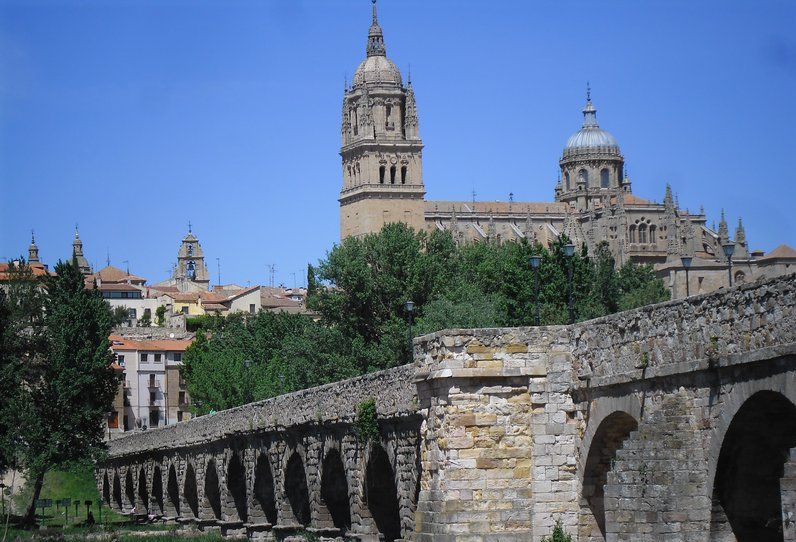 The Plaza Major is indeed a magnificent square but regrettably on our visit it was  filled up with commercial tat, stalls and a stage. We understand that you have to make money but it did somewhat ruin the ambience. Not to be disappointed, however, the old town oozes atmosphere and is easily explored on foot. The golden stone buildings reflecting the warmth of the sun. 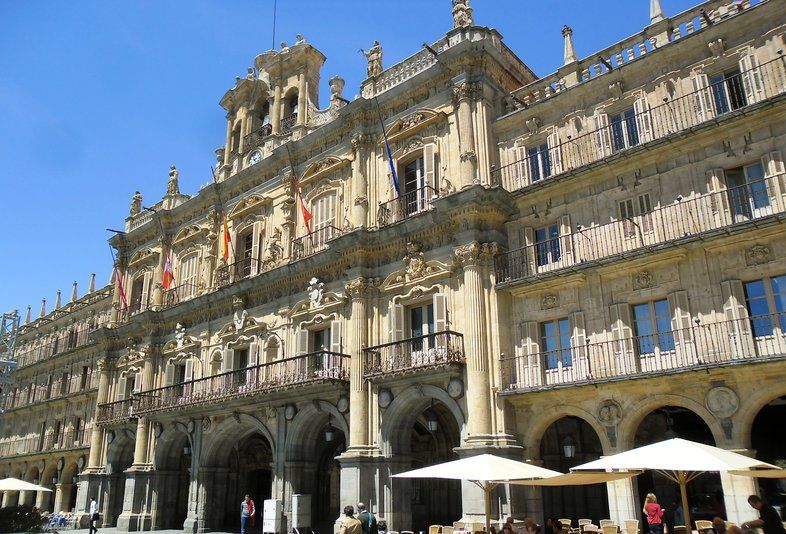 Royal Pavilion in the Plaza Mayor

We would never get away without mentioning that Salamanca is home to one of Europe’s oldest universities. Our host at the campsite, Camping Ruta de La Plata,was very helpful in telling us the history of the town and claiming that it was the oldest university but my son, an Oxford graduate was having none of that when we told him this on our return to the UK. Nevertheless though  Oxford may be older, Salamanca being founded in 1218 is pretty old to me. 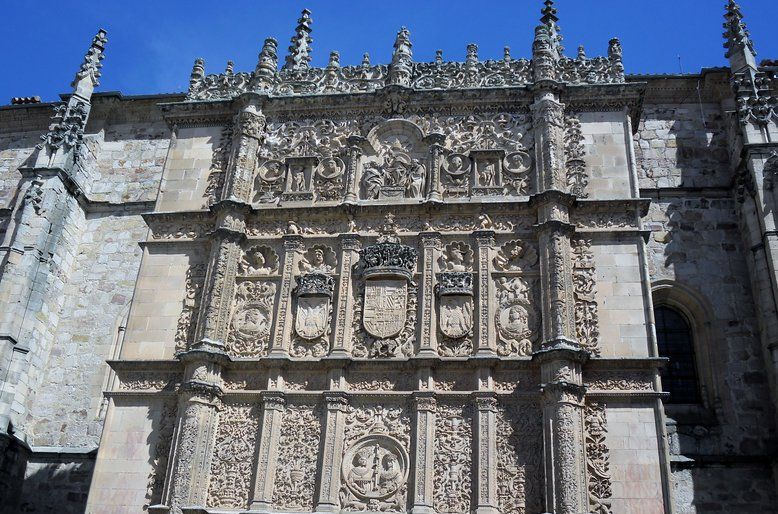 Façade of Salamanca University on the Patio de las Escucias 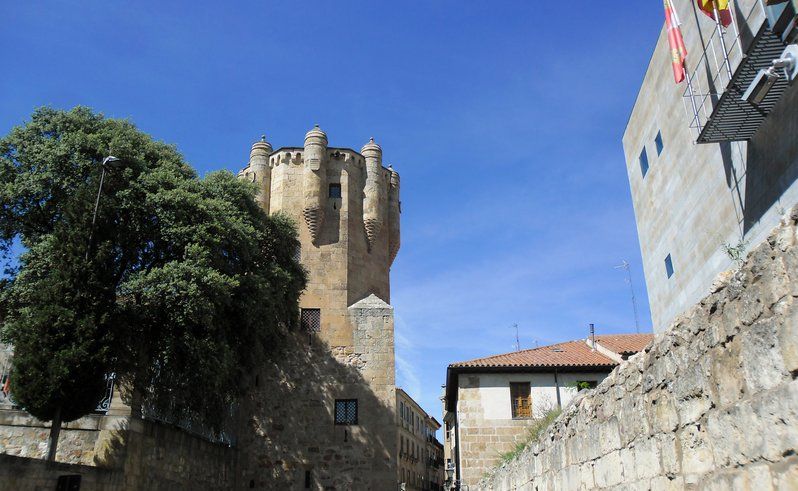 Torre del Clavero, this 15th century tower is all that remains of a palace that stood here. The original turrets are adorned with the coats  of arms of its founders.

What our host was amazed at was some fellow Brits on there way to Portugal, albeit they had had an extended stay because their motor home broke down, did not intend to visit the city. I think she took it as a personal insult, so proud was she of  Salamanca.

We must confess we were also totally perplexed, particularly since there was a regular bus to the centre which stops, literally outside of the campsite and costs only 1.40 euros each way.

Camping Ruta de La Plata is situated in the town of Villamayor, about 3 miles from Salamanca.This was one of the few times that our Sat Nav  had a funny few minutes, trying to take us down a very motorhome unfriendly street.  After a few abortive trips down the main street, we reprogrammed it with the co ordinates from my Camping Cheque guide and we were on our way. Basically on entering the town, you take the first exit off the roundabout, signposted to the football club and then pick up the signs.

This is a second category site but we liked it. It had shaded pitches which we soon realised were much in demand in Spain, a mixture of older and newer facilities but all spotless and a very welcoming and informative hostess. Wi Fi was free and available at the reception area.

This is an alternative site for visiting Salamanca and can be highly recommended and it has all the facilities that you would expect.

The big plus of this site is that you can cycle from it into Salamanca and for most of the way you follow the River Tormes, to the Roman bridge and then cross the river into the town. The majority is off road or along quiet residential roads, when you have to leave the river.

The cycle will take you about 30 minutes and very pleasant it is too.

Alternatively there is a regular bus service.

It was whilst cycling into Salamanca that we had our best view ever of bee eaters, about 50 on the telegraph wires, as we headed towards the river. 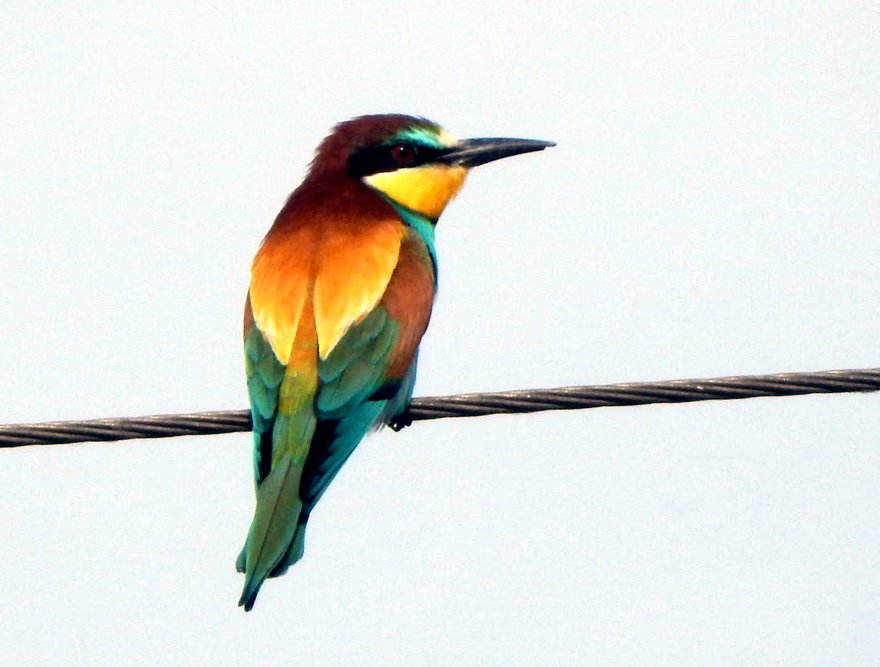