As you leave the motorway, La Languedocienne, you descend towards the coast from the limestone Massif de la Clape de Gruissan  and are rewarded with magnificent views of the area, the regional park La Narbonnaise, which will be your playground for the next few days.

We based ourselves at the campsite Soleil D’Oc which is located between Gruissan and Narbonne Plage. We had good vibes about this area as soon as we arrived, as we were greeted with the site of a Griffon Vulture flying over the entrance, only metres above the reception area. By  gosh they are enormous and we are never likely to get  such a close up view ever again. 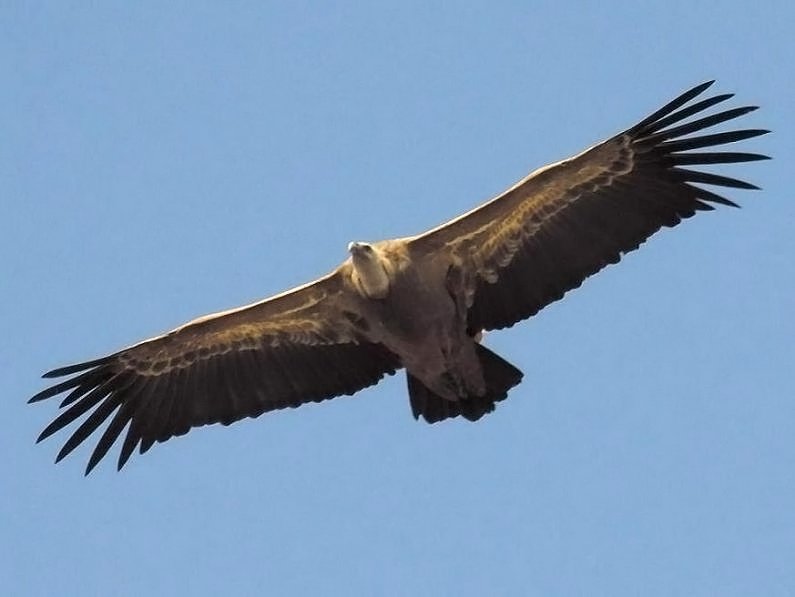 Soleil D’Oc was a Camping Cheque site  and we were literally at the tail end of the season (mid October) and took advantage of the 15 euro nightly camping cheque fee. The staff were very friendly and the sanitary facilities clean. The motor home service point was basic but adequate.

and strangely so were the official aires. The one at Gruissan, at Gruissan Plage ,which is open early April to early October and charges 8.50 euros per night. Also the one on the D332 between Gruissan and Narbonne Plage was also closed  but this did not stop some motor homers on route to Spain, parking in the entrance.

We were a little surprised that the aires were closed as there were plenty of motor homes on the road.

There was a superb aire on the coast at St Pierre sur Mer near the Étang de Pissevache, it was surrounded by trees and had no marked pitches and was a parkland setting, not busy in October but I guess a different ball game in the summer.

The aire was operated by  an electronic barrier, which probably explains why it was open and was  accessed by using your credit card and at only 4 euros was excellent value, water and electricity were available using jetons at 2 euros each.

The main attraction for us was the fact that there is an excellent network of  6 off road cycle routes varying in difficulty, based on the town of Gruissan . You can either do each ride or what we tended to do was to mix and match and there is the added benefit that there is a cycle path  right outside of the campsite, which leads directly into Gruissan and this was the primary reason why we chose to stay at Soleil d'Oc. 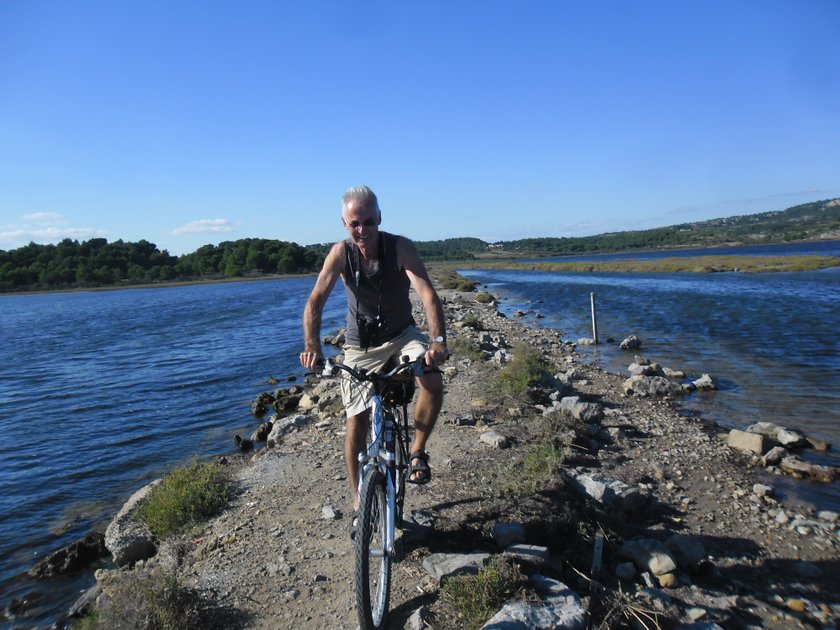 As we entered the above section  of route 2, as you cross the Étang de Gruissan, I heard this plaintiff cry from Julia behind me ‘Oh No,’ as it progressively got rockier. Thankfully coming in the other direction  were a Danish couple, who  greeted me in English and assured me that this was only a short section, before it got much easier.

Basically cycle rides 1 to 4 are easy and on the flat, it is only when you tackle routes 5 & 6 that you have to climb up the Clap de Gruissan,, but there is plenty to keep you occupied if you choose not to tackle these.

There is the added advantage that there is a super  ride to Narbonne  from Gruissan  and  a large part of the ride follows canals, firstly the Canal de Ste Marie before picking up the Canal de La Robine which leads you all the way into Narbonne.

Additionally this route is all plain sailing, not a pothole or rut in sight just perhaps the odd tree root, so it makes the 20 km journey very easy and it is well signposted, so no chance of going wrong and you will virtually always see Narbonne in the distance. There is the added advantage that it is all on the level. 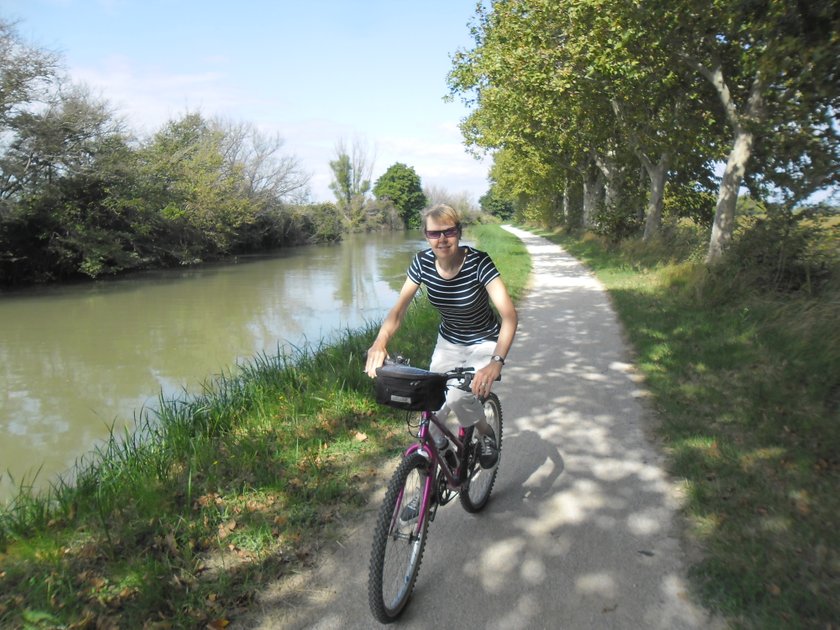 It makes a great day’s ride with lunch in Narbonne. We chose to have a picnic which we picked up at a snack shop, just before you entered the main square and not only was it superb value  at  6 euros for a baquette , dessert and drink, it was absolutely delicious.

It beats a Gregg's sandwich and sticky bun anyday. How do the French do it? 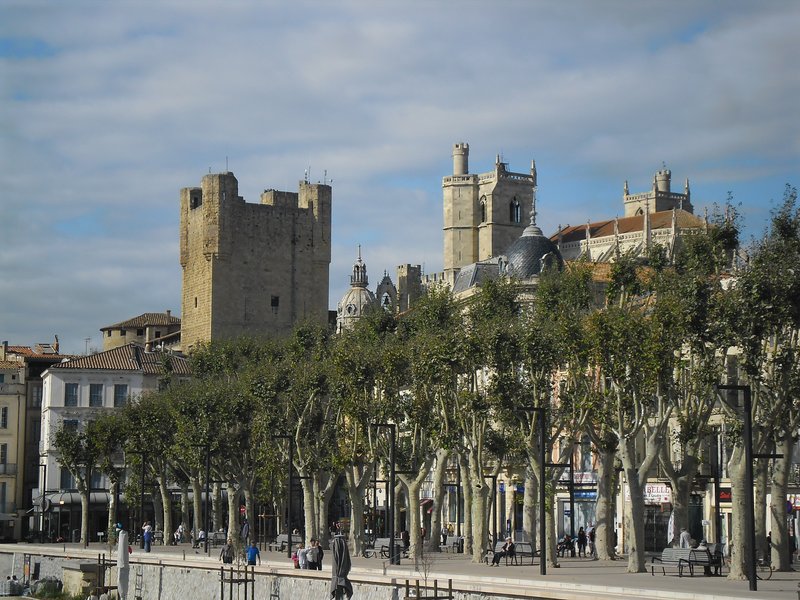 The canal takes you right into the centre of town and the quayside is a great spot for lunch, with views of the  Archbisop's Palace, Le Palais Neuf, and the cathedral of St Just St Pasteur, towering over the square.

The town has its origin in Roman times when it was founded as Narbo Martius at the strategic cross roads of two Roman roads, the Via Domitia,of which a small section remains,uncovered in the main square and the Via Aquitania.

More visually significant Roman remains are to be found at L'Horreum,(entrance charge) which is an underground storage area indicating the significance of Narbonne as a major market town.

Pick up a map at the tourist office, lock up your bikes and explore the medieval streets of this magical atmospheric town. 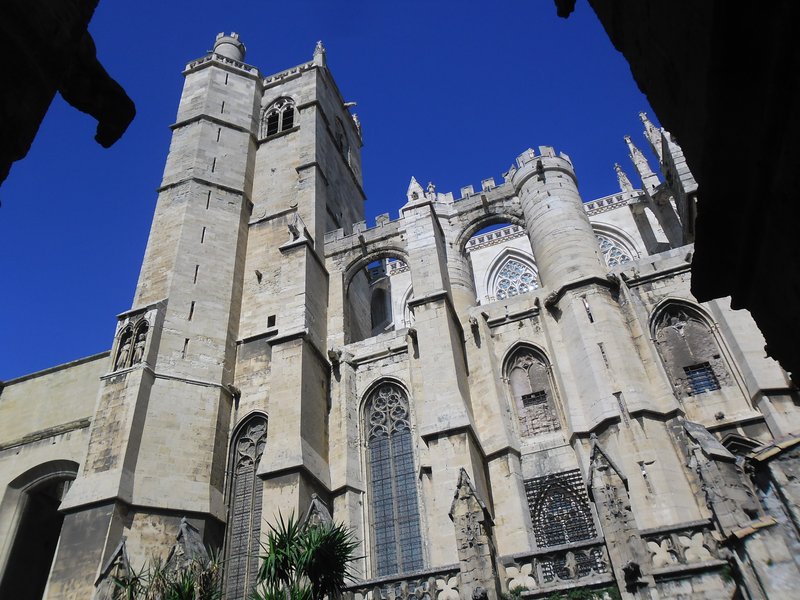 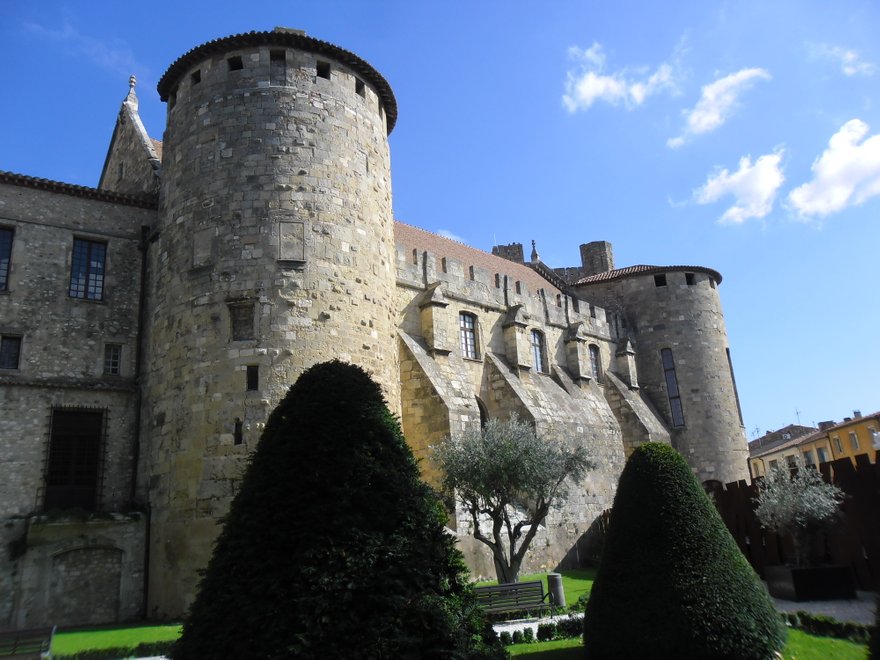 It is possible to cycle past Narbonne  to the junction of the Canal du Midi  and also in the other direction from Narbonne,

you can cycle southwards towards the sea  at Port La Nouvelle, following the Canal de Robine.

Do not forget to  explore Gruissan itself, of which a lot can be done on your bike.  A visit to the   13th century ruined tower ‘ Tour Barberouse’ is a must . Leave your bike at the bottom and climb up the tower for panoramic views of this town, surrounded on all sides by water. 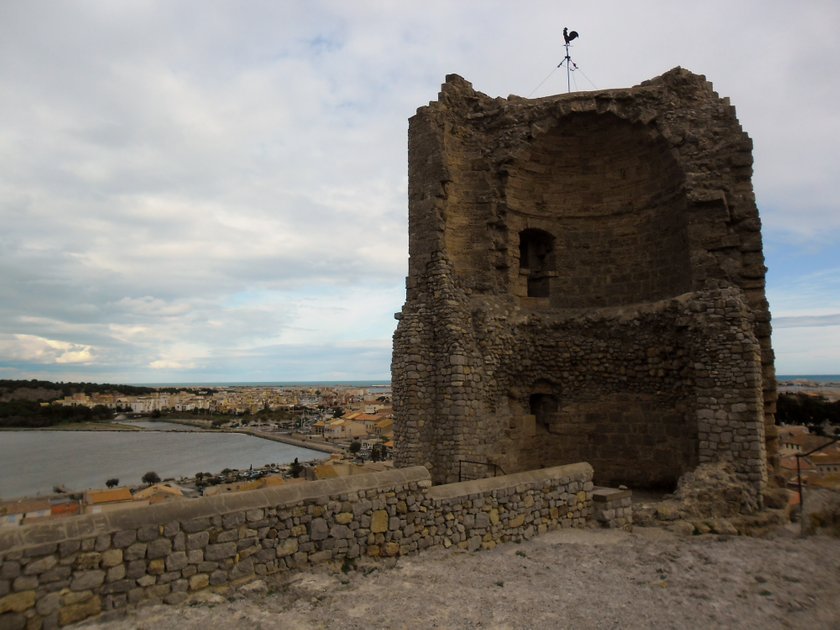 A visit to the church at the bottom is worth it.

The whole area is beautiful with its coast and superb beaches, its many etangs and canals,its famous vineyards of Fitou,Corbières and Coteaux du Lanquedoc  and with the  beautiful  unspoilt countryside  of the Clape de Gruissan as a backdrop. 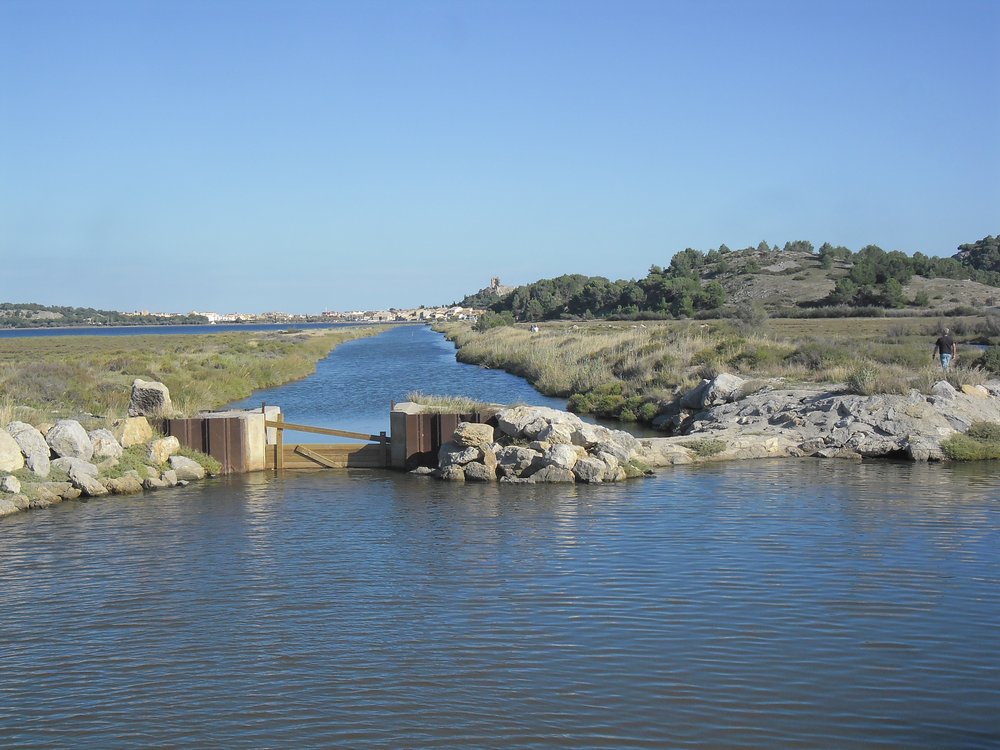