A coastal and canalside route

We make no apologies for this being number one on the list, not only because of the cycle route but this campsite is one of our favourites, it enjoys panoramic views of the coast and of the English Channel.

Also as we live in landlocked Buckinghamshire and it is as close as anywhere on the coast for us.

I also confess to a sense of nostalgia, as  I used to go here on holiday  in the sixties.

It was a favourite of my Dad's as he used to play at the bandstand in the RAMC band between the two wars.

It is also pleasing to see that after a period of neglect it is being revitalised, the Lower Leas gardens, the cliff railway and the Old High Street to name a few. OK the'old rock shop' where you used to see them making the rock from the street has long gone but you can not have everything in this life.

Also do not forget to pick up your fresh fish from Folkestone Trawlers in the old harbour.

To start the route you need to firstly take the steep climb out of the site and then at the top, turn left and follow the road down into the old harbour.

You follow the harbour around until you pick up the coast and then cycle along the coastal seawall.

The route 2 does take you through the beautifully revamped Lower Leas Gardens and though this whole area is definitely worth a visit, we prefer to follow the seawall.

You continue to follow the coast until you reach Sandgate where you follow the road, but still on a  shared cycle path. 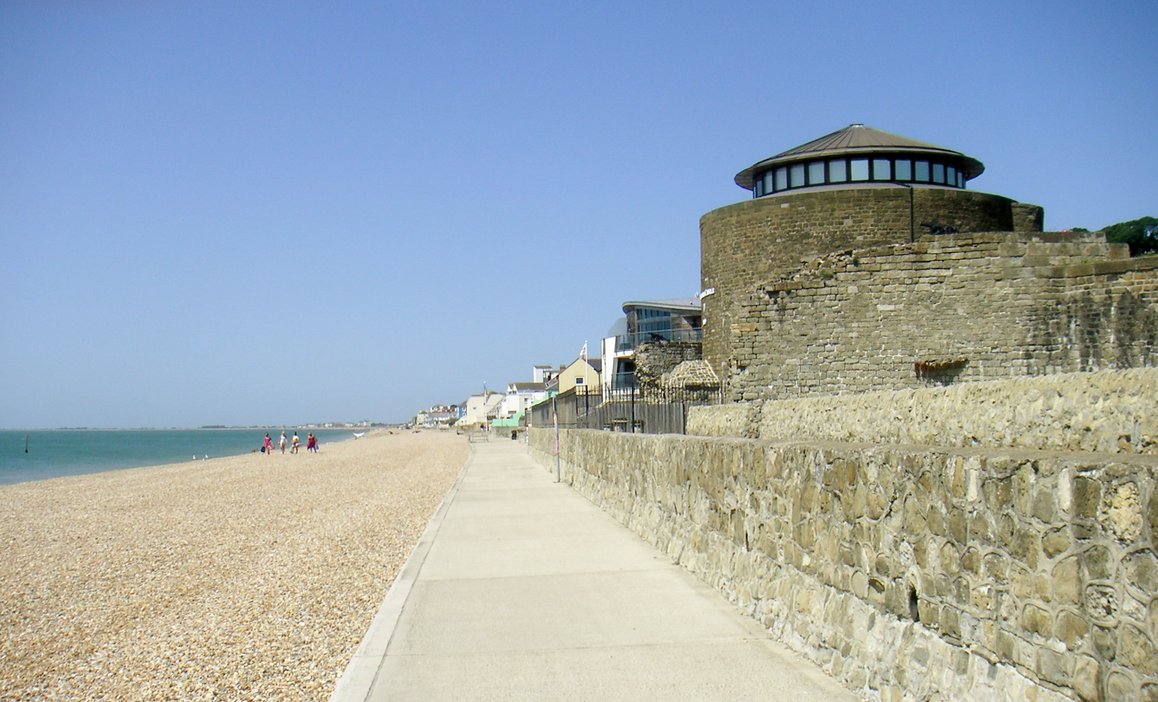 You continue until you reach a garage and just after here you have the choice of following the Military canal into Hythe or continue to follow the coast.

The military canal was built as a defence mechanism during the Napoleonic Wars.

We prefer to follow the coast unless the wind is blowing.

When the seawall cycle path ends you have to turn and head in towards Hythe, along St Leonard's Road ( plenty of lunch opportunities).

Follow the canal through the park until you come to the station for the Romney, Hythe & Dymchurch railway; turn right here,crossing the canal bridge and turn left to follow the canal, route 2 is signposted.

Initially you follow a residential road, though this shortly gives way to a track which I believe was part of the old military road.

This gives way to a path which appears to have been recently upgraded and gives excellent views of the surrounding countryside with the ruins of the Roman settlement in the foreground and Lympne Castle in the backround, which in the 13th century was the home of Thomas A Beckett,archbishop of Canterbury.

In Roman times,a tidal inlet came close to the fort which was a base for the Roman fleet. 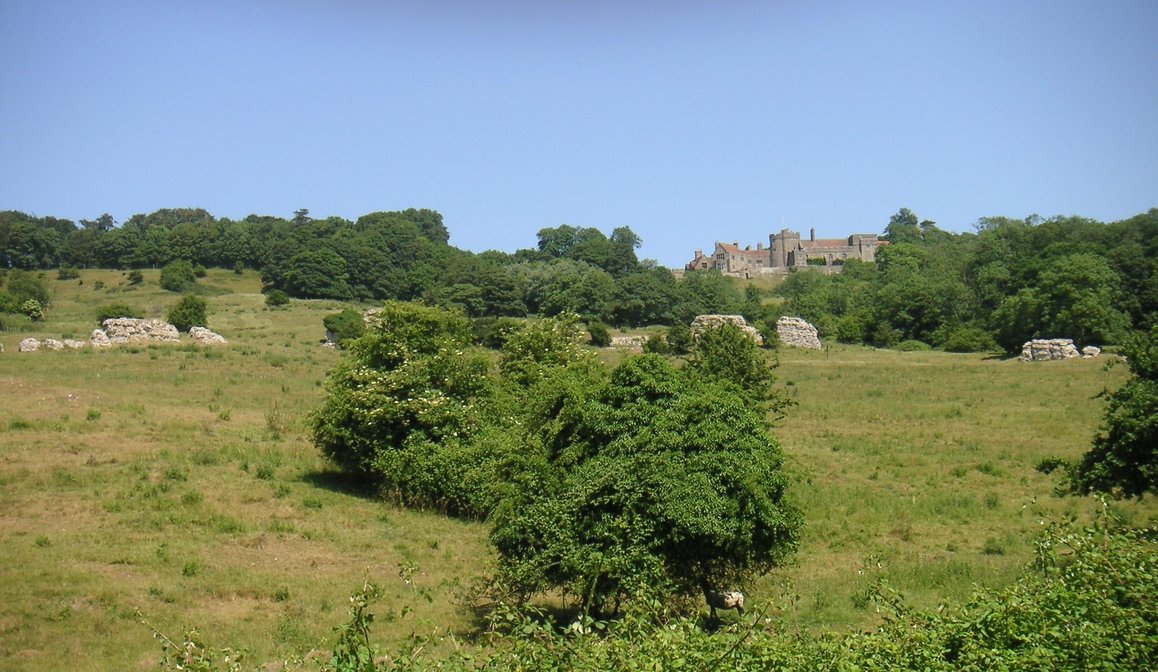 You continue past the open zoo and you may be lucky to get a glimpse of the wild animals as you cycle past.

Eventually the route2 bears to the left, crossing the canal, following a paved road as you enter Romney Marshes.These roads are very quiet and virtually devoid of motorised traffic.

We chose to cycle into Dymchurch which is a busy seaside town on the sweeping St Mary's bay. Here there are plenty  of refreshment

Since the summer of 2011 there has been a new seawall, which is essential to protect the surrounding marshes from flooding. There has always been a seawall here and in the early days, it was instrumental in the build up of the alluvial  plains of the marshland.

Today the seawall provides an excellent cycling opportuniy to explore the bay, to the west towards Dungeness and to the east towards Hythe.

You can continue on towards the cinque port of Rye but before you get tempted,  the distance to Rye from Folkestone is 32 miles. 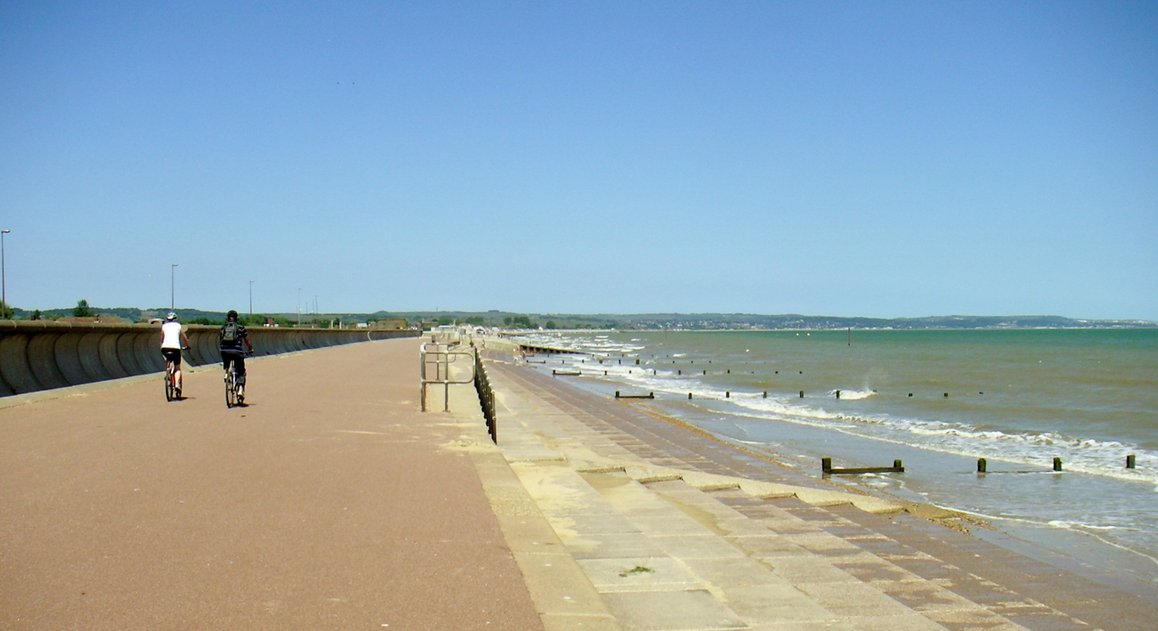 We chose to continue along the seawall towards Hythe, rather than retracing our steps back through the marshes. Unfortunately the seawall finishes at a firing range and you have no option but to take the main road towards Hythe. Here discretion takes the better part of valour and we resorted to using the pavement.

Fortunately this ride along the side of the road is only for a mile, until you reach the Prince of Wales pub at Palmarsh, where you turn left and after a 100 metres you turn right over the Palmarsh footbridge,over the canal and back onto cycleway 2 and the return towards Hythe and Folkestone.

Before you head back, test out the model acoustic radar on the bridge which is a miniature replica of that used to warn of advancing enemy aircraft in World War Two. It does work.

The revitalisation of Folkestone continues and in recent years the Old Harbour Railway has been redeveloped, once derelict, it has been revamped and is now a buzzing area with many new outlets and places to eat and drink

For an extension or an alternative base, starting point, click on the link below for cycling from the Motorhome & Caravan Club Site at Dalesacre 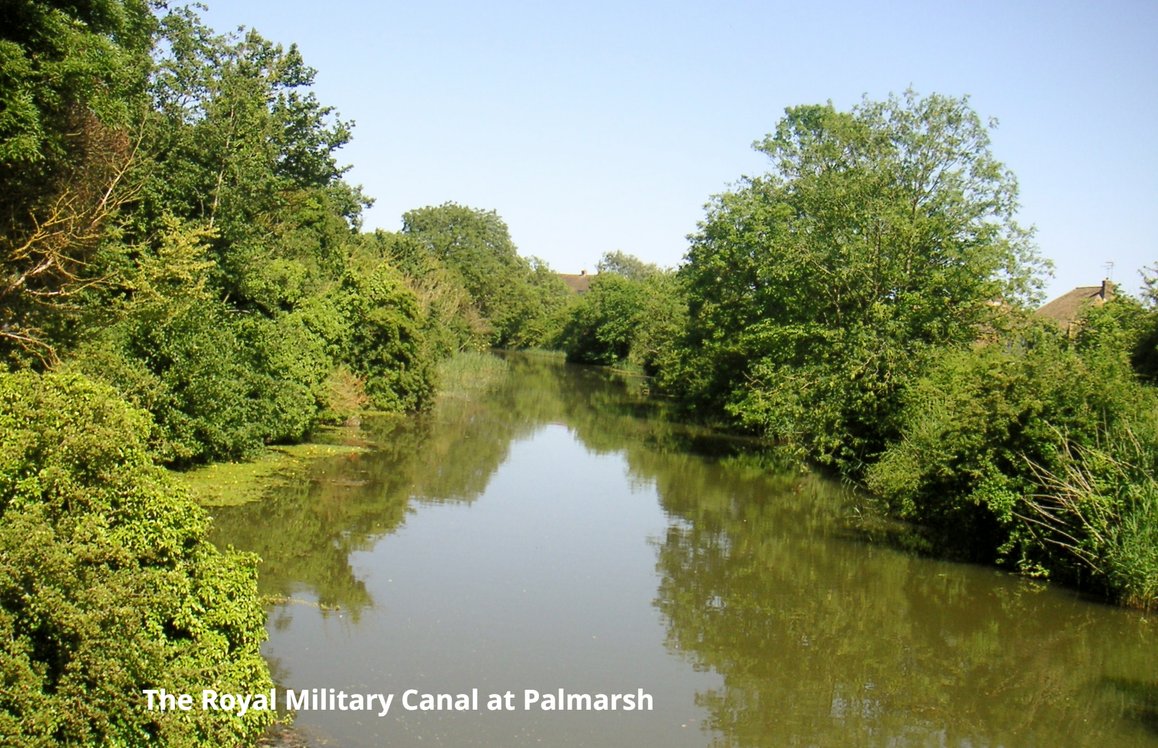