Granada was the final visit on our motor home tour of the three classical cities of Spain and the draw was definitely the Alhambra, made even more romantic, as this was the last bastion of the Moors to fall to the Catholic kings of Spain. Granada, however, is not just confined to the Alhambra.

The first thing you have to do on arriving is to book your ticket for the Alhambra as access is strictly controlled and though you can turn up and queue for tickets, this was never on the agenda as we are allergic to queues which can be extremely tedious.. Secondly you can buy the tickets at the Granada branch  of the Banco de Bilbao Vizcaya  Argentaria , the BBVA or on line, a day in advance, at

Which saves any queuing.

Or you can do as we did, as we did not have a laptop with us and ask your campsite to do it for you. There will  be a small charge of 5 euros which in the grand scheme of things is not going to  break the bank. At just over 15 euros each it represents excellent value.

There are three  main parts to the  Alhambra: the palace gardens of the Generallife, the 11th century fortress of the Alcazaba  and the Royal Palace, the Palacios Nazaries and for the latter you have to select your time, at half hourly intervals for your visit and be warned they adhere strictly to the times. Once you  are in you can stay  long as you like.

We stayed at  Camping Reina Isabel which is run by 8 brothers and it used to be their parents’ family home. It is located away from the hustle and bustle of Granada in  the town of La Zubia, about 3 miles from Granada’s centre but importantly on a regular bus service into the city, which runs at 20 minute intervals (30 minutes at weekends)

La Zubia also has a good supermarket to stock up on  supplies and there is also a service station on the same site for diesel.

The reception was superb  and at 24 euros for a city centre site, good value. The sanitary facilities were spotless, spacious pitches, many very private and with plenty of shade. A motor home service point was also available and all in all this was an excellent  and convenient site to visit Granada. Wi Fi was free at the bar  (2 euros if you wanted it at your pitch)

The plan of action was to visit the city sites on the first day and to pick up the  tickets  to allow a full day to visit the  Alhambra on day two.

Our visit coincided  with the weekend and to say that  Granada is  a lively town  would be an under statement . It seemed that every stag  and hen party in  Spain had descended on  Granada and there was a cacophony of noise throughout the town . The Spanish know how to party.

As with most towns the focal point is the  16th century cathedral, and the Capilla Real or royal chapel, burial sites of the catholic monarchs, Fernando and Isabel.

Behind the cathedral is the narrow streets of  the area called the Albaicin  and it is worth spending an hour  just wandering through these streets and soaking up the atmosphere in the old Moorish town.. It is particularly colourful, with so many open shops, absolutely crammed with Arabic souvenirs and it also seems that every other shop is a café with  hookah or shisha  pipes, commonly known to you and me as hubble bubble pipes. 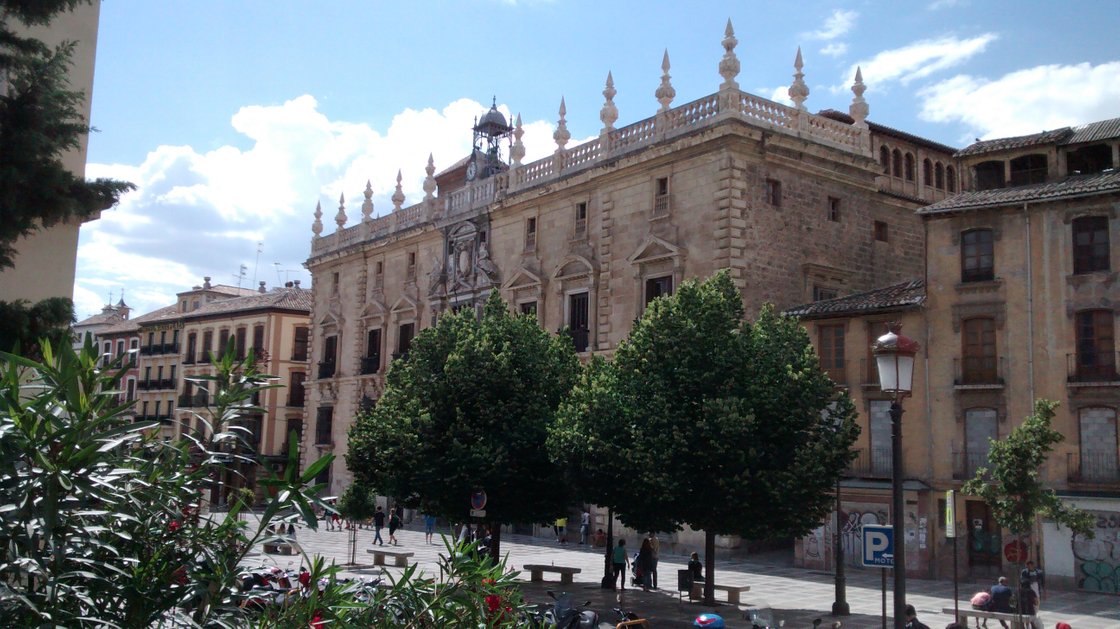 Real Chancilleria built in 1530, the Renaissance façade is stunning

The Alhambra can be divided into three distinct areas,  the Nasrid Palaces, The Alcazaba and the Royal Gardens of the Generalife.

You can also add in the more modern, that is 16th century palace of Carlos V, which is perhaps somewhat incongruous, given the setting of the  Alhambra but is nevertheless quite impressive.

Though you can get a bus to the Alhambra, the best way  to see it is to walk from the square, Plaza Nueva, up the hill along the Cuesta de Gomerez., which takes about 20 minutes .You know that you are on the right track, when you reach the Puerta de Las Grenadas,(see below) an impressive Renaiissance gateway, built in the 16th century by Carlos V. 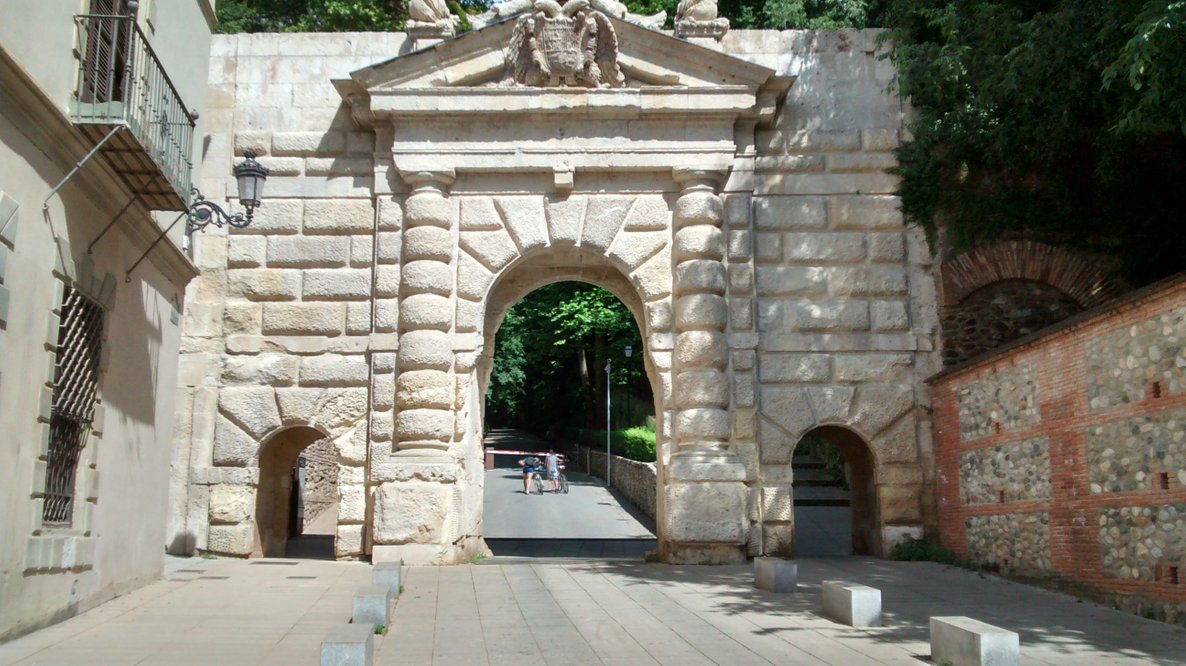 Though you can get a bus to the Alhambra, the best way  to see it is to walk from the square, Plaza Nueva, up the hill along the Cuesta de Gomerez., which takes about 20 minutes .You know that you are on the right track, when you reach the Puerta de Las Grenadas, an impressive Renaiissance gateway, built in the 16th century by Carlos V.

You reach the 14th century, Puerta de La Justica, the original entrance to the Alhambra, passing  a huge terrace fountain, courtesy of our friend Carlos V. 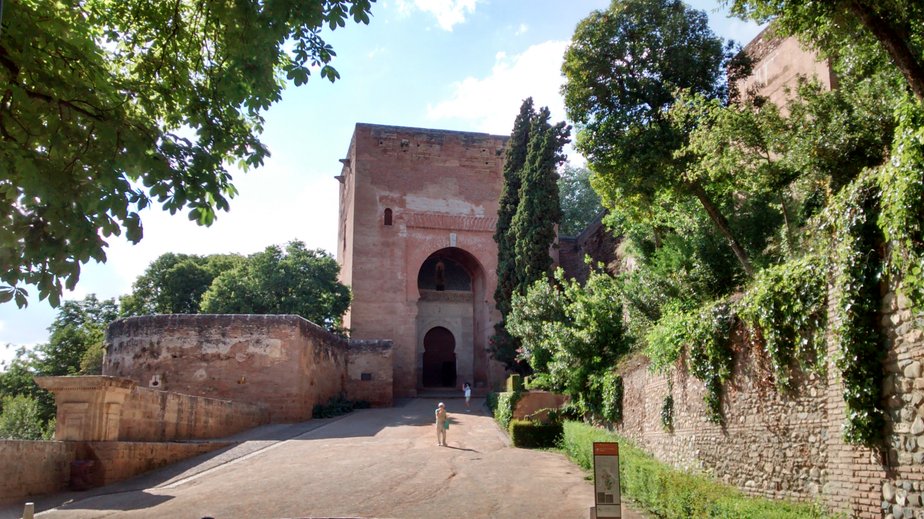 You can go through this gateway to get a feeling of the Alhambra, without a ticket but you will need to walk up to the main entrance, about another 5 minutes uphill, to collect your tickets.

As we had picked up our tickets the previous day, we started our visit at the Puerta de la Justica, to be met by the  11th century Alcazaba, the earliest and most ruined part of the fortress and incredibly impressive. 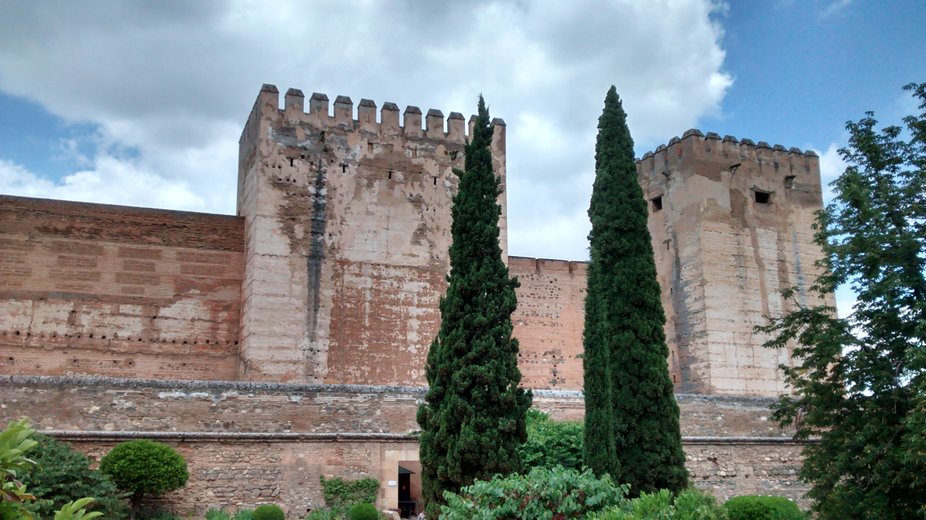 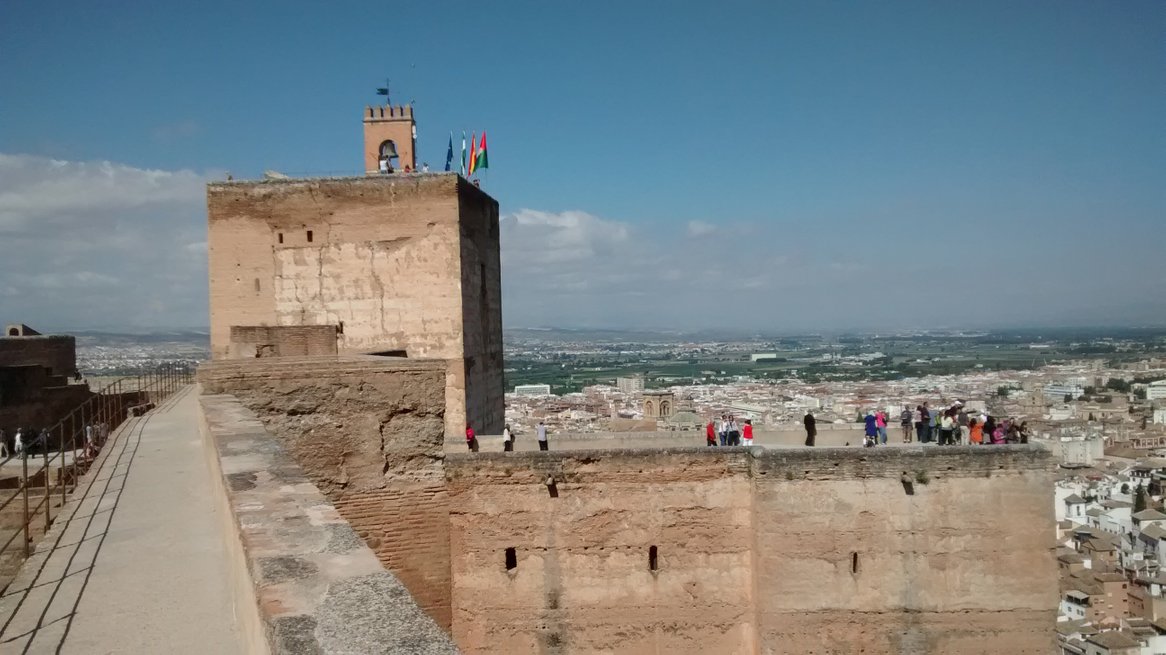 It is dominated by the massive Torre de La Vella which was named after a huge bell on its turret. It is also the subject of one of the greatest put downs in history. It was here in 1492 that the Catholic Kings raised the standards of Aragon and Castile and on seeing these, the Moorish Ruler Boabdil, leaving Granada for exile,  turned and wept to be rebuked by his mother, Aisha “ Do not weep like a woman for what you could not defend as a man “ 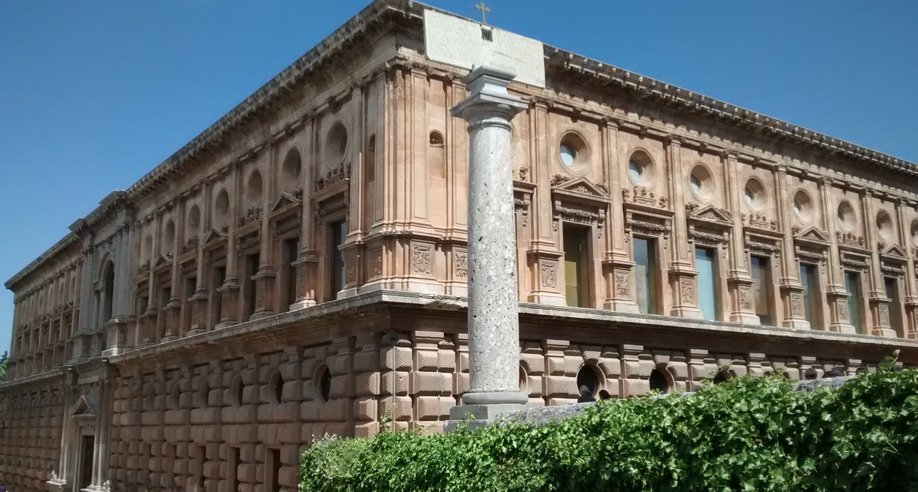 The Palacio de Carlos V houses two museums, which are free for EEC citizens , the Museo de Bellas Artes, which as its name suggests has historic paintings, through the ages and the Museo  de La Alhambra. The star exhibit in the latter museum is the 15th century  ‘ Alhambra Vase’

These Moorish palaces date back from the 14th century  and  the contrast to the mighty fortress of the Alcazaba is incredible. The buildings are very delicate in comparison  but the decorations and use of light is incredible. What is even more amazing is that these buildings were used as a prison in the 18th century and were captured  by Napoleon in 1812 who caused considerable damage. He arranged for the destruction of the palaces, by explosives, which would have been the grossest act of vandalism ever but the attempt  was thwarted by the crippled soldier charged with its destruction , who luckily fo us removed the fuses. 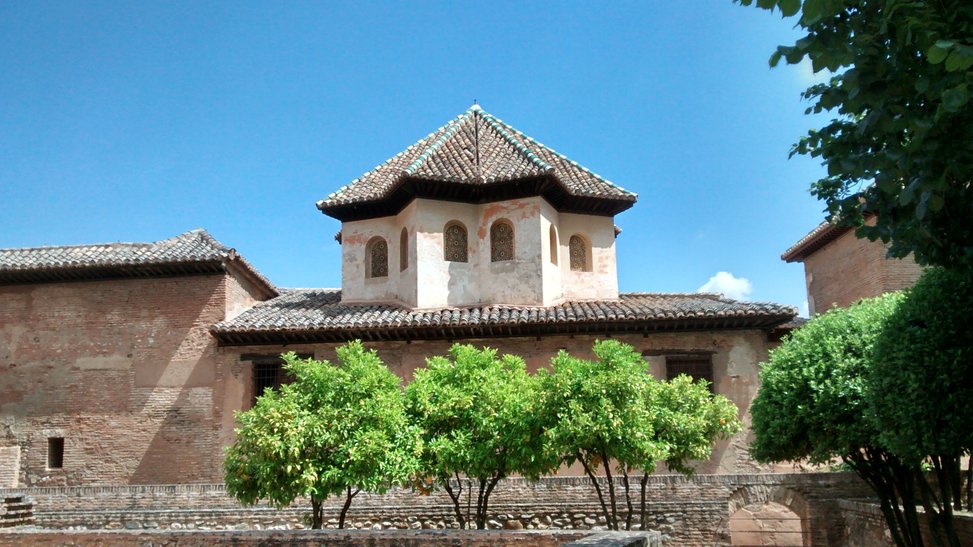 Sala de los Abencerrajes - (above) takes its name from the family that were rivals to the Boahdil family,

They were allegedly massacred here whilst attending a banquet 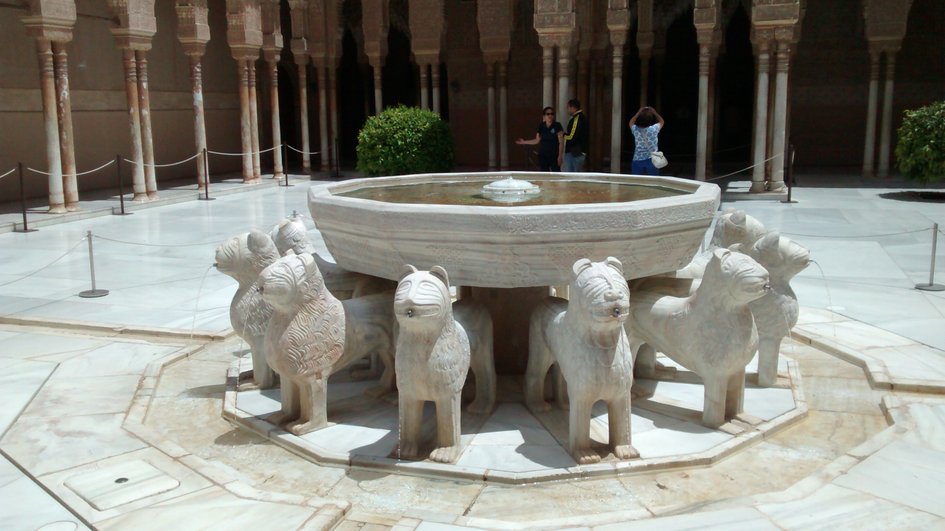 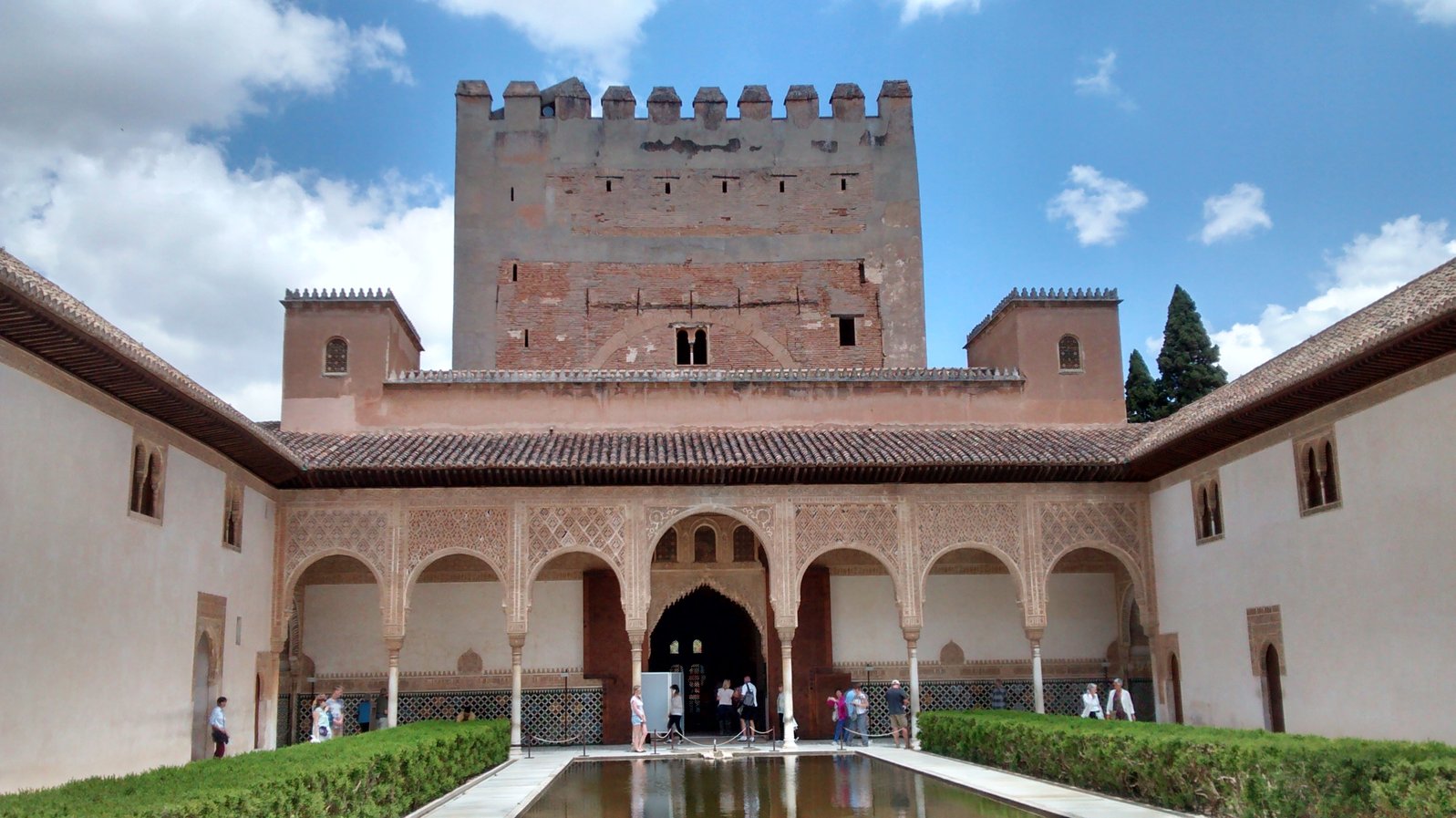 Twenty years later, the process of restoration, ongoing today was set in motion, aided by the American writer Washington Irving, who set up his study in the empty palace and wrote the romantic ‘Tales of the Alahambra’ The ensuing publicity ensured the survival of the Alahambra. This book is on sale throughout the Alahambra. 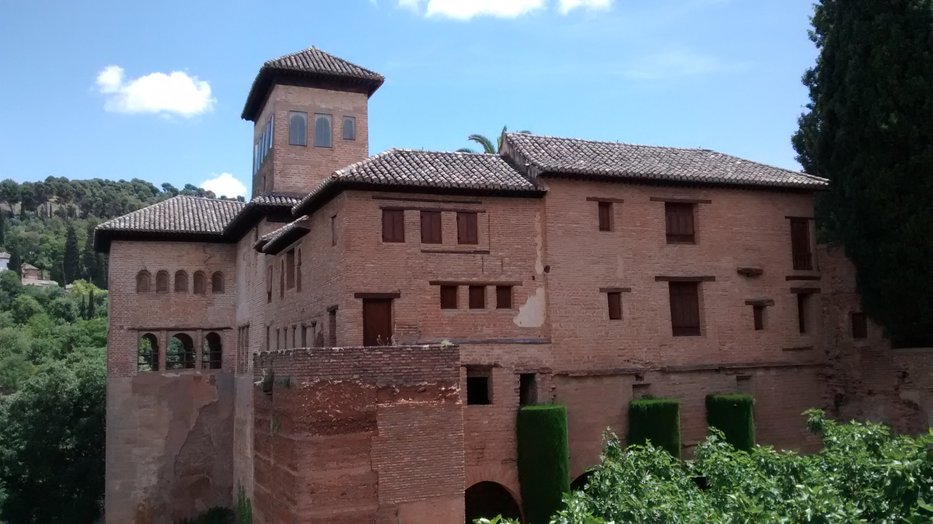 Everywhere you turn there are amazing buildings and sights, the beautiful Parador San Francisco, a converted monastery, the original burial place of Queen Isabel.

And the church of Santa Maria, started in the late 16th century and finished in the early 17th century. 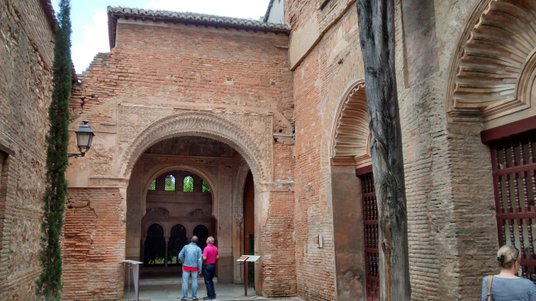 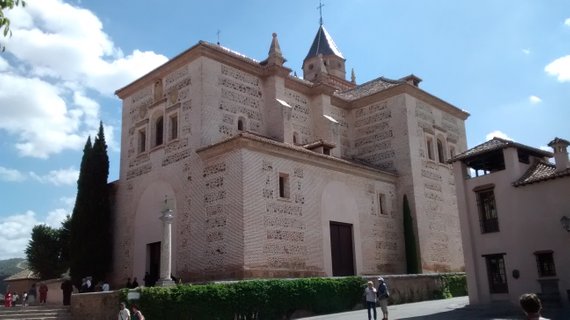 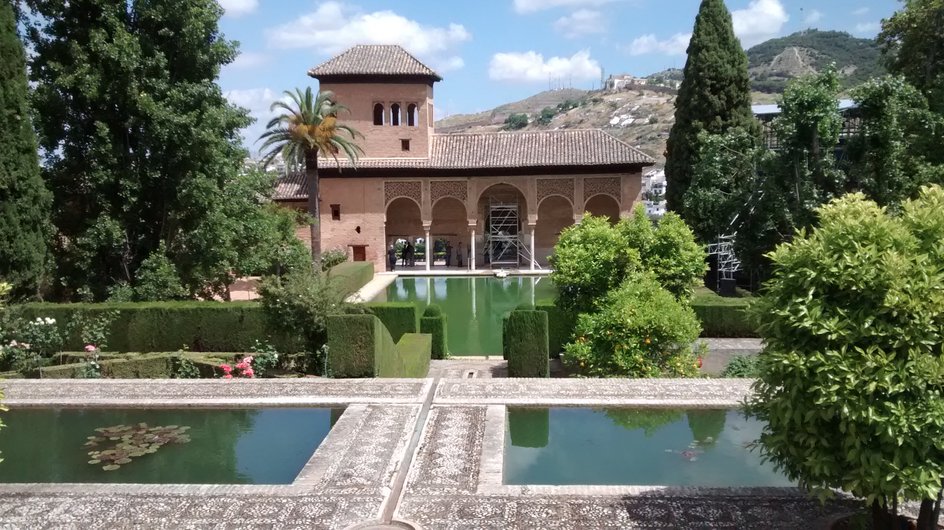 The gardens  which lead you up to the Generalife are excellent preparation for what awaits.

Palacio del Partal - this is all that remains of this palace, the oldest building in the Alahambra

These are the gardens and summer palaces of the sultans and despite the crowds, it does not take too much imagination to see that these were reminiscent of the paradise envisaged by the  Moslem religion.

The Patio de la Acequia (below) 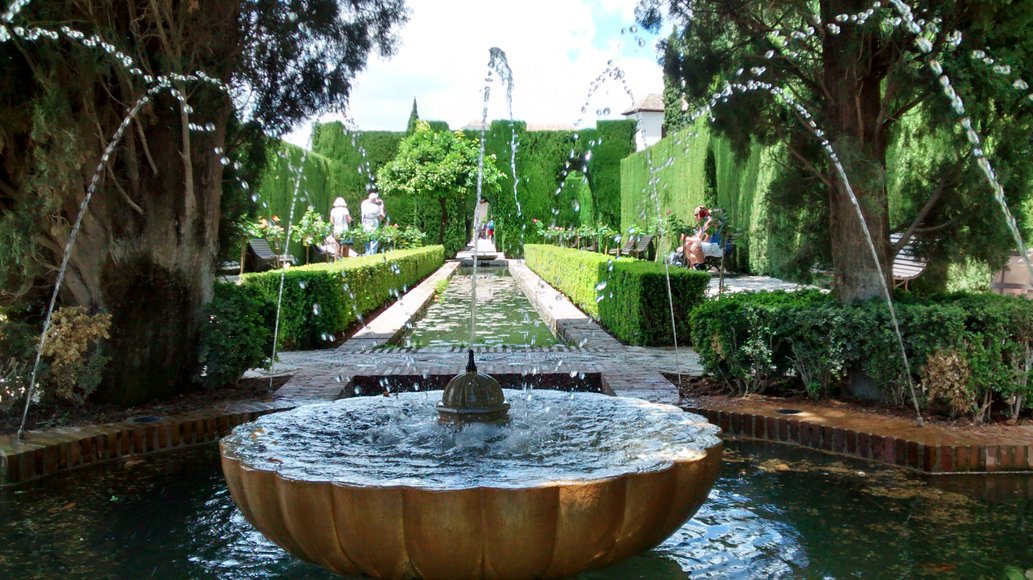 The Patio de los Cipreses(below) was the secret meeting place for Zoraya, wife of the Sultan, and her lover, the chief of the Abencerrajes, who met their grisly fate in the Sala de los Albencerrajes 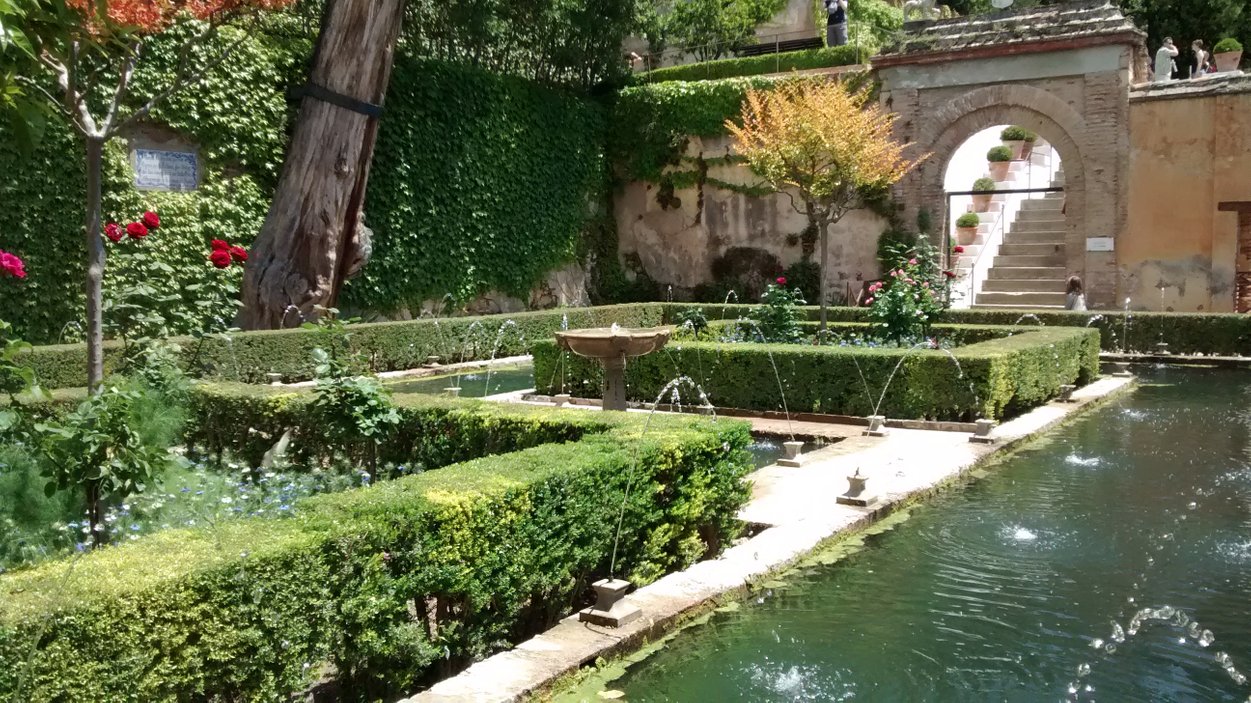 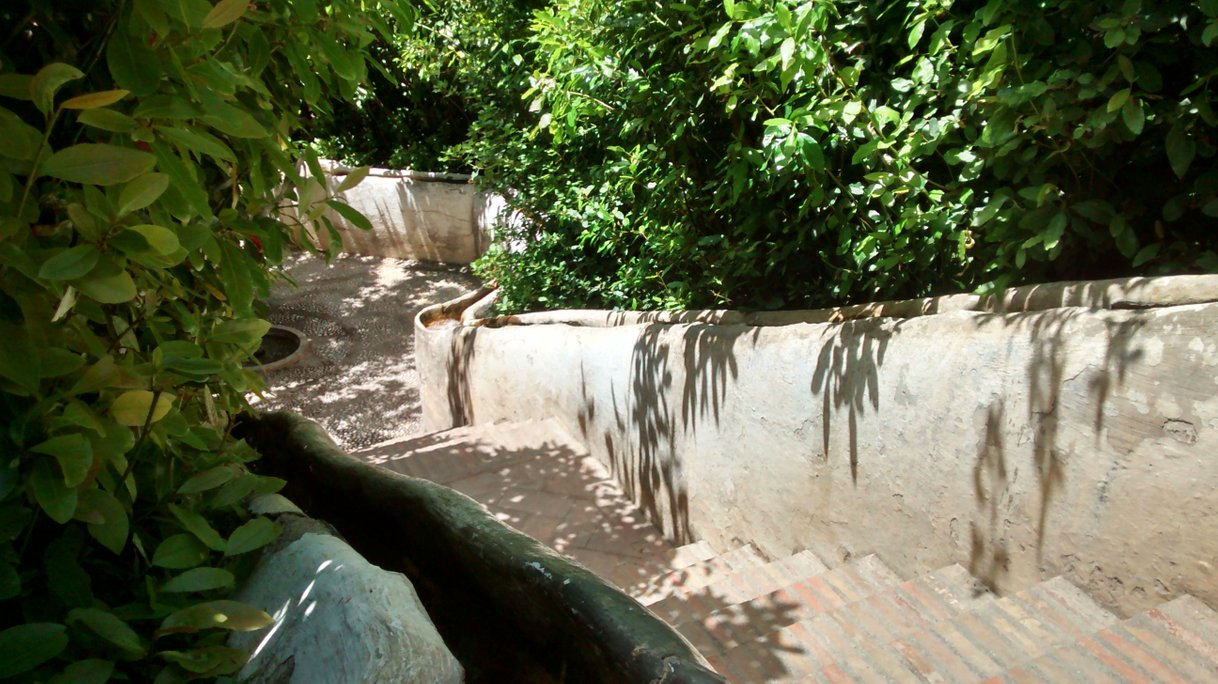