Denmark by motorhome -A motorhome tour of Denmark, Sweden and Norway, based on their three capital cities of Copenhagen, Stockholm and Oslo.

We planned this as our first stop for two reasons, firstly

it was only half an hour from Esbjerg, as we wanted to make the most of our first day and secondly it is one of Denmark’s historic towns.

We stayed at Ribe Camping just outside of the town.

Which participates in the ACSI scheme and represents good value for  an offpeak stay.

Unfortunately though we arrived in early May, it apparently clashed with a religious festival and though the facilities are excellent, it did not represent good value at nearly double the ACSI price.

They were, however, extremely helpful, when I overran by yellow levellers which promptly got jammed between the tyre and the cab steps and I was unable to either go forward or backwards.

An hour later with the jack well and truly knackered and after digging out the yellows we were free, so in future I think I will always reverse onto them.

An alternative ACSI site in the vicinity is the site on the island of Romo which is a haven for birdwatchers.

Ribe is a very attractive medieval town with many quaint buildings and its medieval street pattern is very evident. It is very compact.

It is dominated by its cathedral, which also proves a useful visual landmark when you are exploring the surrounding area.

On the Quay, next to the canal is a marker which displays the flood levels and the previous threats from the surrounding sea, hopefully now prevented by the dikes against the neighbouring Wadden Sea. 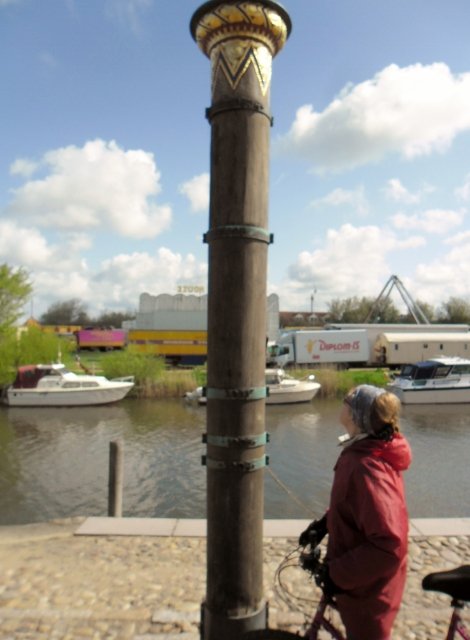 The highest marker represents the disastrous flood of 1634, when the flood waters rose 6 metres above their normal level. Despite this the medieval centre remained miraculously intact.

Just outside of the town is Slotsbanken which is the site of the medieval castle and a short climb takes you to the statue of Queen Dagmar and fine views over the town and the surrounding marshland. 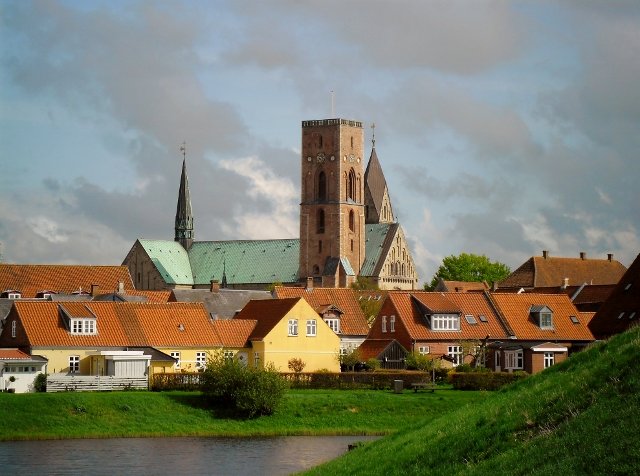 A bike ride to Kammerslusen  ( you can do a circular route via the campsite and Ribe) not only gives you a good picture of the surrounding marshland but also man’s attempts to tame the sea with the massive sea lock. 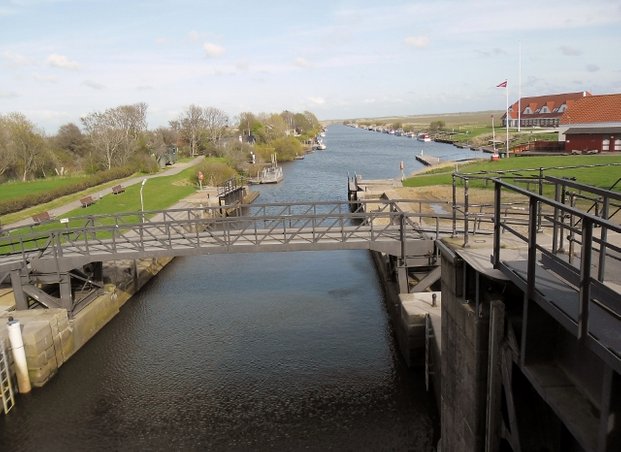 A view of the canal from the top of the sea lock.

I dare you to climb up to the top of the lock and cross the causeway – it rattles and though scary offers remarkable views.

It was built essentially to keep a sea access for the town.

The North Sea coastal cycle route 1, from Skagen in the north to the border, passes here and a return cycle ride to Romo is possible.

It is however, about 50 miles return trip from the campsite. It does, however, have the benefit of riding along the flat but be aware on certain sections you will be battling against the wind, great on the return but really hard work against it.

The plan of action was to stay at the Camping Cheque Site Kolding City, but on arrival and the fact that it was situated next to a dual carriageway, this did not fit into our vision of an idyllic overnight site.

The beauty of motorhoming is if you do not like somewhere, you are like snail and you just pack up, with your house on your back and move on.

Our next stop was another ACSI site, My Camp at Trelde Naes.

which is situated outside of Fredericia in Eastern Jutland on the Vejle Fjord.

It is located on the Fjord and you step outside of the site and take a magnificent walk along the coast. We chose to drop down onto the beach and though a slightly more difficult walk it was rewarded with unspoilt views. 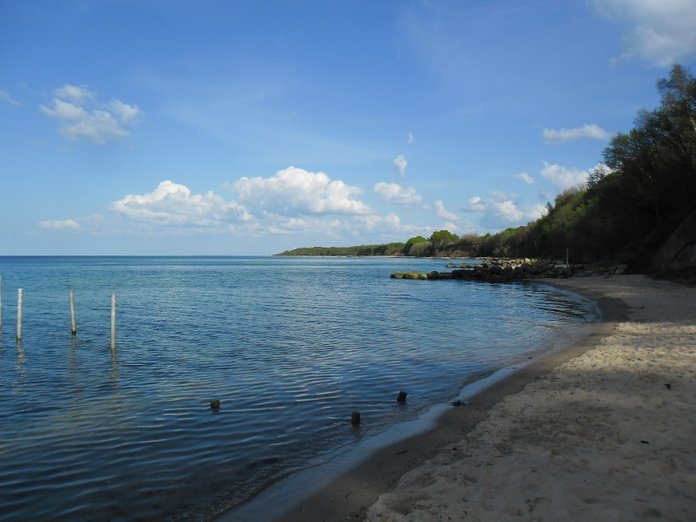 You eventually turn into woodland, overlooking the sea and we were rewarded with a magnificent view of a female eider and the irridescent beech leaves as they had freshly emerged from their winter sleep.

The biggest bonus was my spot of a Wryneck, the last time I saw one of these was 20 years ago.

It is a circular walk but we chose to retrace our steps to get a double whammy of the coastal views.

Denmark is a series  of islands and the largest are now connected by bridges, the largest which is the one from the island of Finn to Zealand and commands a toll, which for a van over 6 metres doubles and runs out at a fairly hefty 355 Danish Krone or roughly £40. The engineering is, however, impressive but be prepared for a bit of buffeting from the crosswinds. 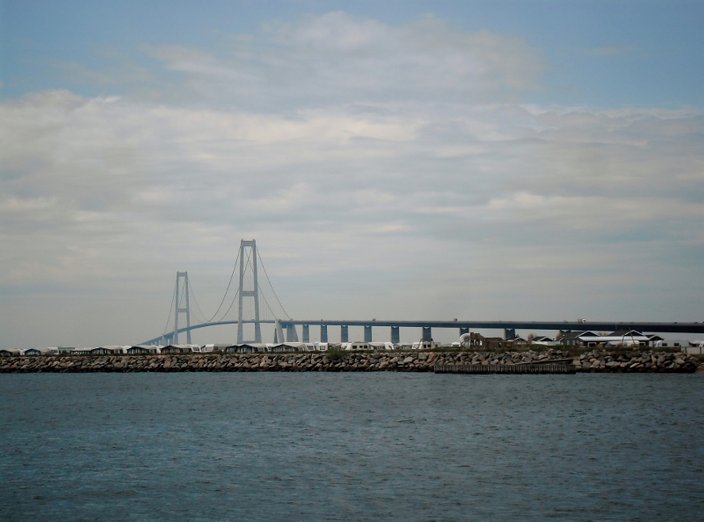 In Copenhagen we stayed at Camping Absalon

This was a Camping Cheque site and at less than £13 represented superb value. The facilities at the site are excellent. In the sanitary block for instance, there are bathrooms with showers and toilets combined.

TIP: Consider paying for camping cheques in euros on their European site, you can often save money this way rather than paying in sterling.

There is a central parking lot available for motorhomes but it was not open when we visited and though it has the advantage of being central, its charges are similar to Absalon, but if you have not got a bike.

The site is an easy, just over half an hour cycle ride, into town. Like many Scandinavian towns Copenhagen is incredibly bike friendly and folk of all ages get on their bikes. There are designated cycle lanes with clear paths over junctions, which are in many cases, controlled by lights and due consideration is given by motorists to cyclists. Also cyclists respect the lights so there is no red light running, as you find, in say London.  Never at any stage did we feel intimidated and the bikes were a great way of seeing the town.

Alternatively you can get the subway for about £8 return each, which is about a 10 minute walk from the site.

Copenhagen is a compact town and easily visited in a day and though it may not be your classic city break destination, it is attractive and the proximity of the water adds to its charm. 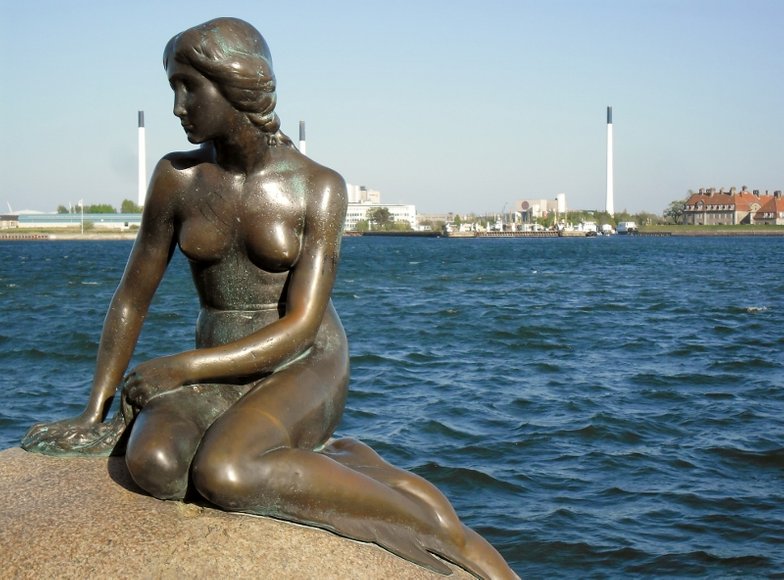 The best known sites are the Little Mermaid and the Tivoli Gardens, though with respect to the latter we were not entirely sold, and with regard to the former we missed this the first time, though we were not sure how we missed the busloads of tourists which come to view it.

*To obtain a picture of the Little Mermaid without it be surrounded by throngs of tourists proved to be a challenge.

Nyhavn is one of the trendiest areas where you will find throngs of people spilling out on the pavements, it was built in the 1600's to cope with the increased trade of that period. 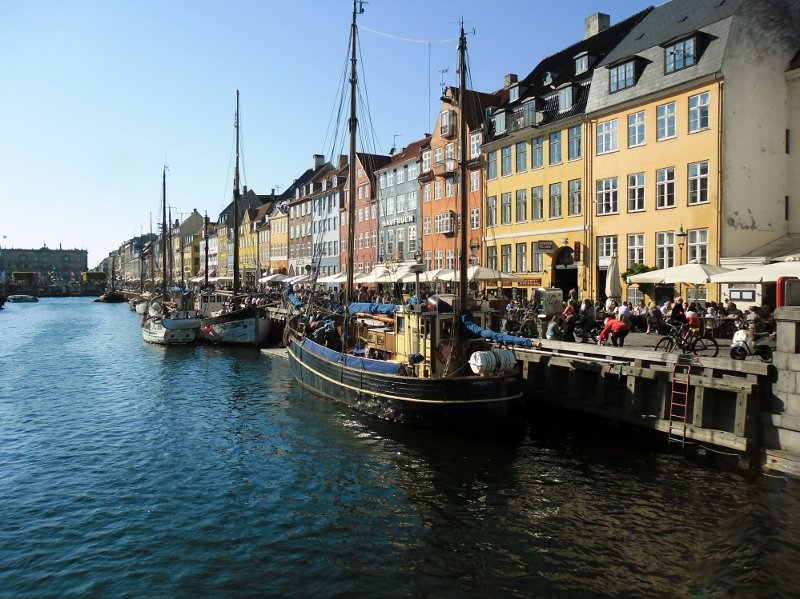 The Danish Royal Residence at Amalienborg 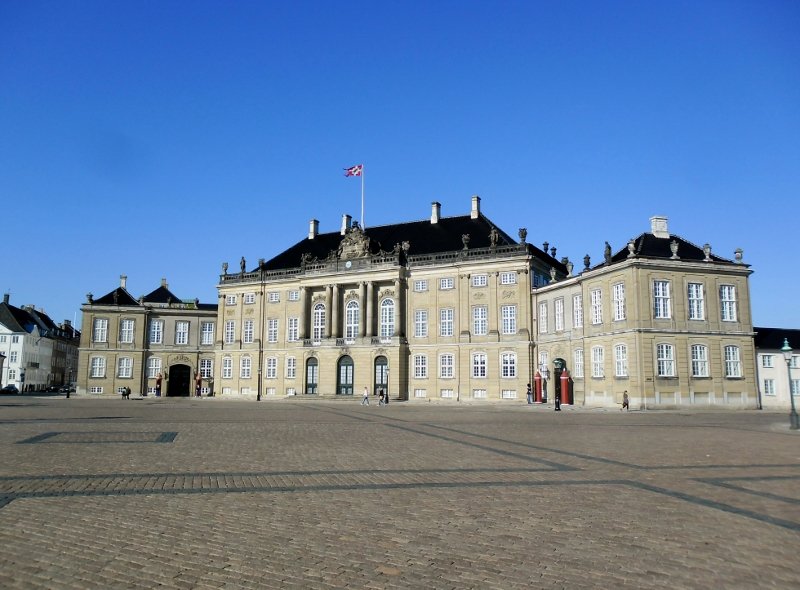 The 'Marble Church' or Frederiks Kirken- lying west of Amalienborg 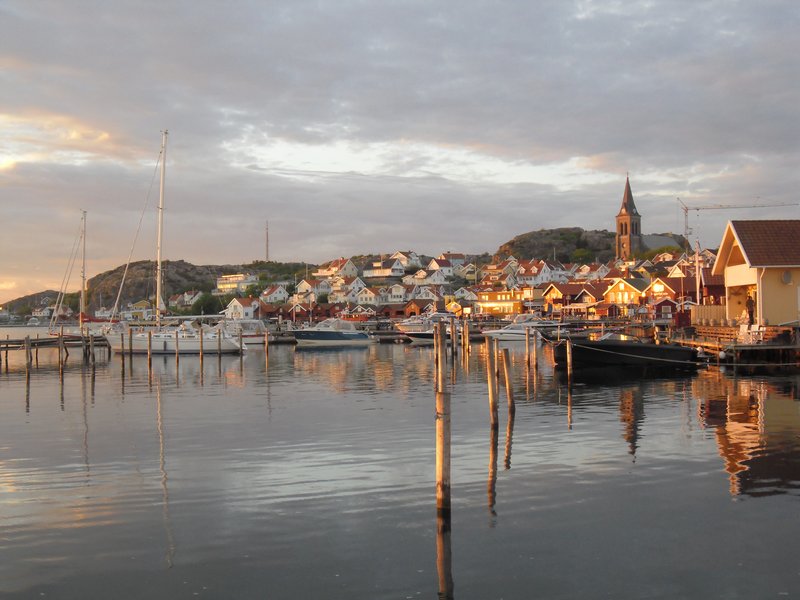 Legend has it that the Goddess Gefion was sent to earth by Odin and by her powers of persuasion, she convinced the Swedish King to give her as much land as she could plough in one day.

She then transformed her sons into oxen and ploughed the country and this legend explains the Lake Vanern in Sweden, as she dug  the earth from the land,created the lake and dumped it to form the island of Zealand.

The fountain was created in 1908 by Anders Bungard and was inspired by the Norse mythology. 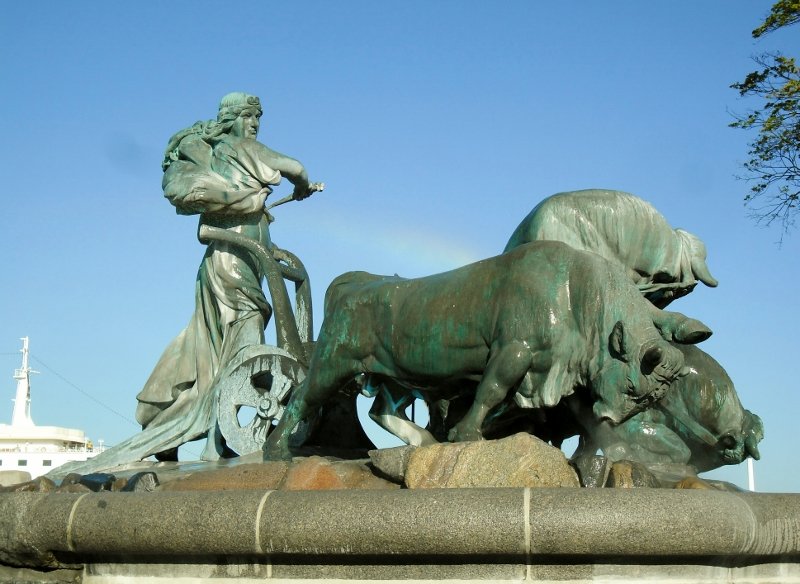 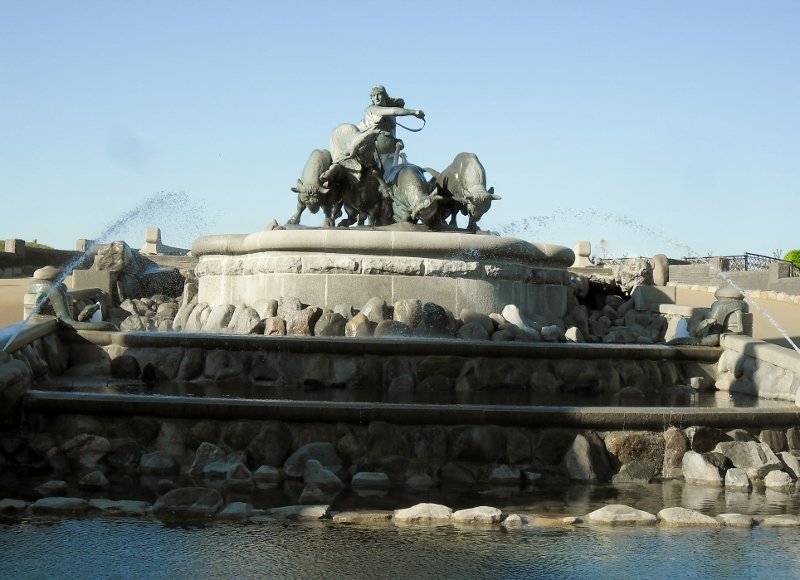 DENMARK Part 2 the return from Norway

We arrived in Denmark  in the port of Hirstals , which does not have a lot to commend it but this was not the reason for taking the crossing, that lay about ¾ hour towards the east at Skagen, or more correctly Grenen, the most northerly point of Denmark.

This is the point where the two seas of the Skagerrak and the Kattegat meet and I recall it from my A level  geography  days and I will whisper it quietly ,of over  40 years ago, but the memory of these two seas was ingrained in my soul, not for bad reasons I hasten to add.

I must confess I got really excited about the prospect of going to Grenen. As soon as I arrived at the campsite I could not get the bikes off quick enough, for the half hour ride to the coast, on what turned out to be a beautiful sunny evening. 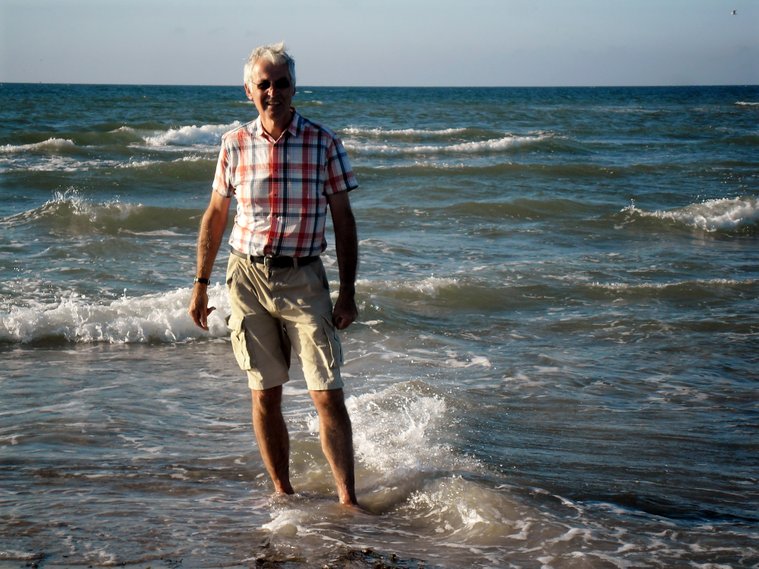 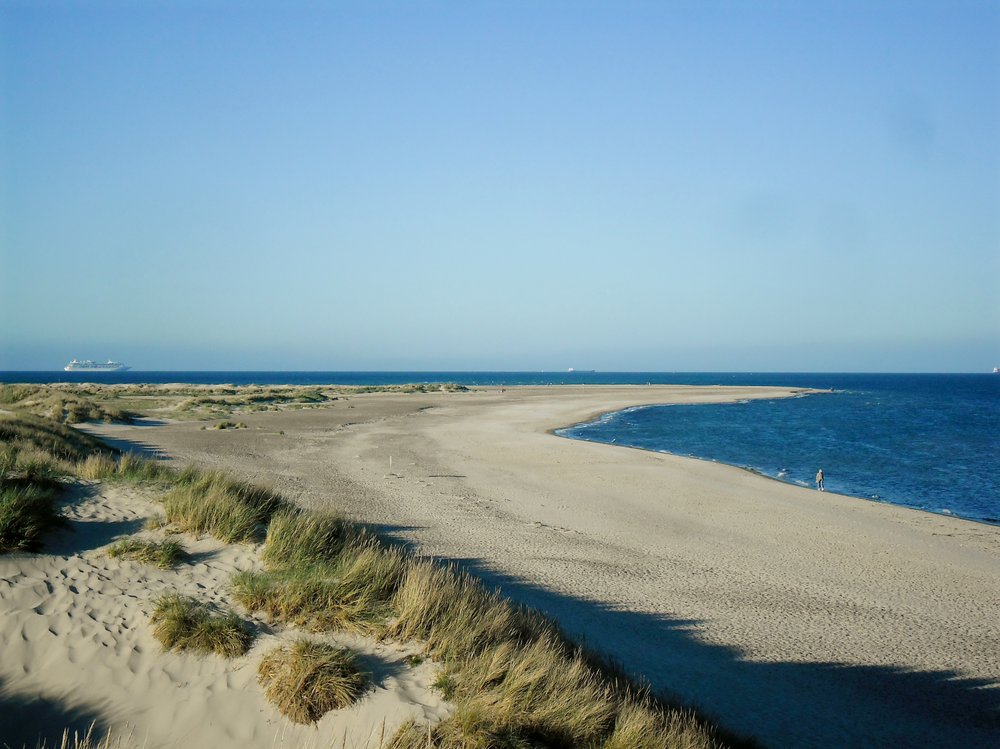 The other big plus of going later in the day is that you miss the crowds and the ubiquitous tractor bus, which takes the tourists on the 20 minute walk across the sands. You really are missing out if you do not walk it.

We stayed at Poul Egg Camping which is a large site but beautifully laid out in sections, so you never felt that it was large and the facilities were awesome. Some of the kitchens in the sites we saw in Sweden and Denmark were out of this world and the shower facilities likewise. It was not ridiculously expensive at 217 DK, less than £25, given the facilities.