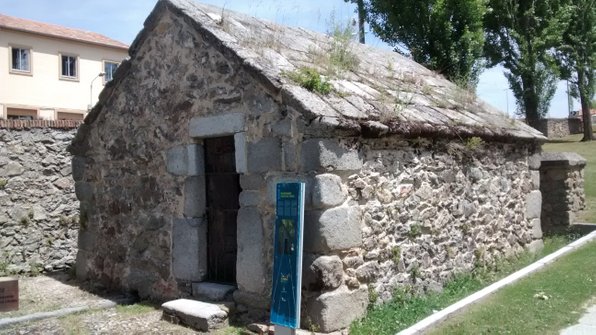 The Casa de Piedra may not be too imposing and it may not be entirely Roman but it is the first sign as you walk into town that something is about to happen.

You then pick up a water channel, not sure if this is the original, nothing too impressive yet but a taster.

At this stage I was becoming a big kid and getting very impatient.

They say anticipation leads to the suspense. 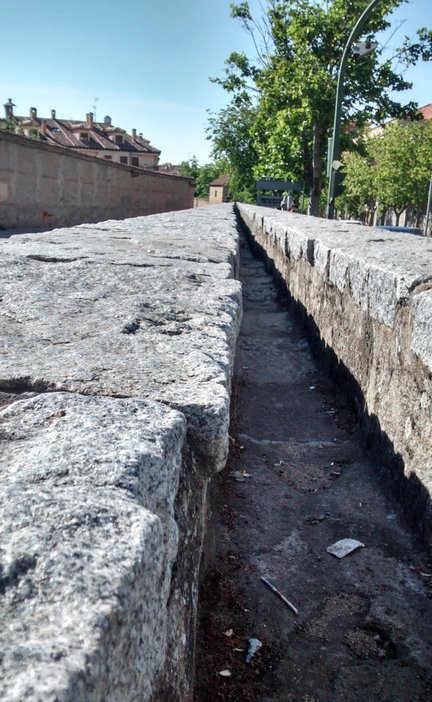 Segovia was the final  classical city and world heritage site on our motor home tour and the primary attraction was the Roman Aqueduct.

As we had avoided toll roads to date we made the decision to do the same from Toledo to Segovia and what an inspired choice this turned out. Once we had negotiated the somewhat busy outskirts of  Madrid, our route took us through the mountain pass of El Puerto de Navacerrada.

It is a mountain pass and the climb up to the summit at 1,858 metres was a beautiful drive. It was originally a toll road, started in 1778 to connect Madrid with the royal palace  La Granja de San Ildefonso, which is at the bottom of the equally impressive descent on the Segovia side.

Care needs to be exercised on both the climb and descent, as this route is very much a rite of passage for cyclists and is one of the epic European cycling climbs and is often used in the Spanish Vuelta.

All along the route the road is covered in inspirational messages, which if you see the gradients they are very much needed.

Our destination was ‘Camping Acqueducto’ and despite its name is situated some 3 kilometres from its namesake. There is a bus service into town but quite honestly it is easier to walk.

It is an older site but well kept, with a motor home service point and swimming pool and at 24 euros a night, in early June, reasonably priced for a city centre site.

If you cross the dual carriage way at the site entrance and walk for about 500 metres there is a large supermarket.

There are not enough superlatives in the dictionary to describe the Aqueduct of Segovia. It is absolutely mind blowing. In our opinion the best way to see it is to walk from the site and pick up its early beginnings, which is the  first water tower, called Casa de Piedra. 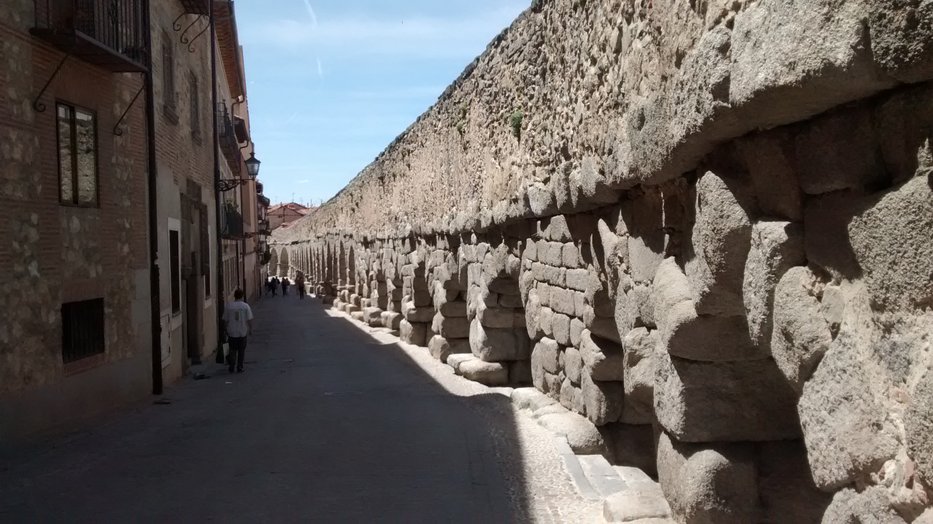 From now on it just becomes mind blowing and when you turn the corner you see it in its full majesty. 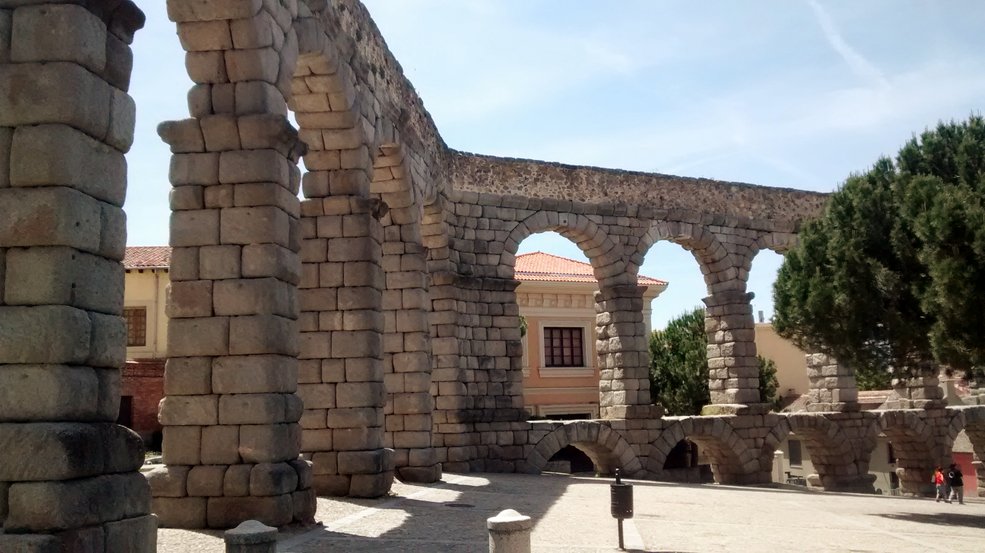 Its full splendour can be seen in the Plaza del Azoguejo and it is undoubtedly the defining historical feature of this city and it is amazing that it has survived nearly 2000 years intact. What is even more incredible is that the massive granite blocks are laid on each other without any mortar and the highest arch stands 29 metres high. 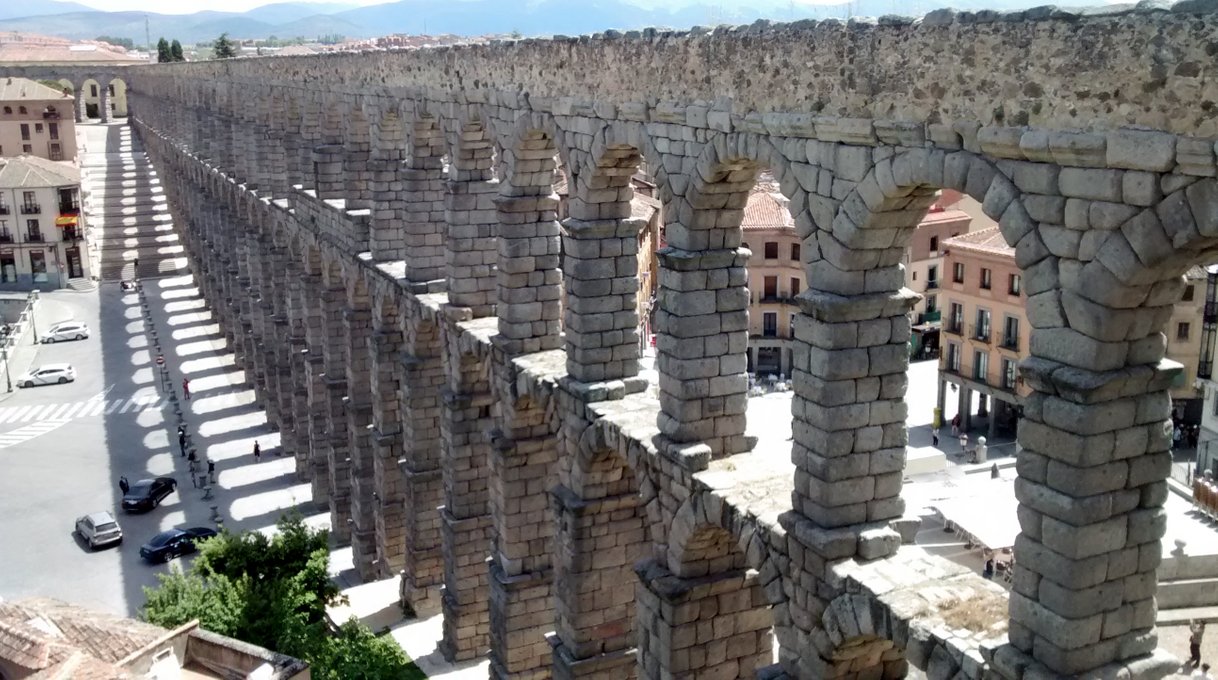 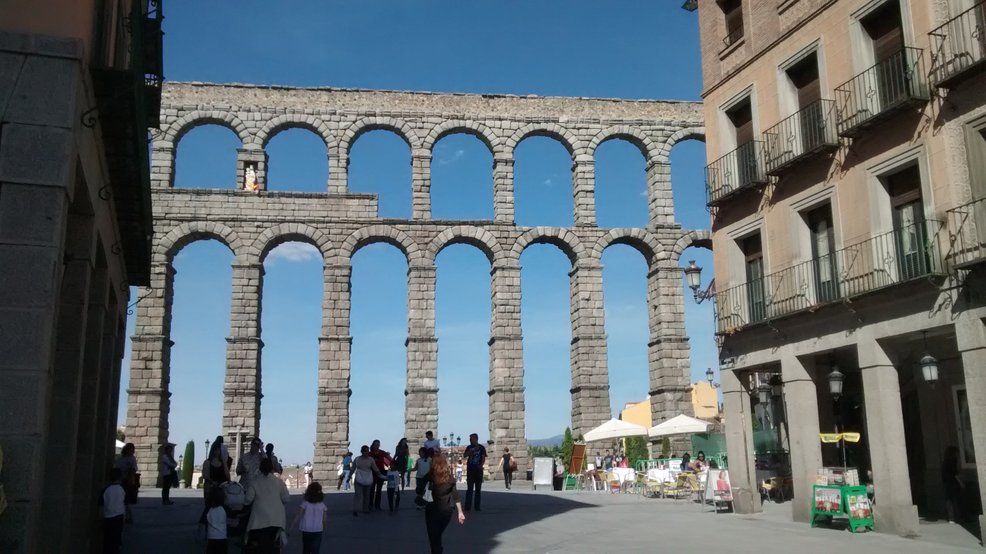 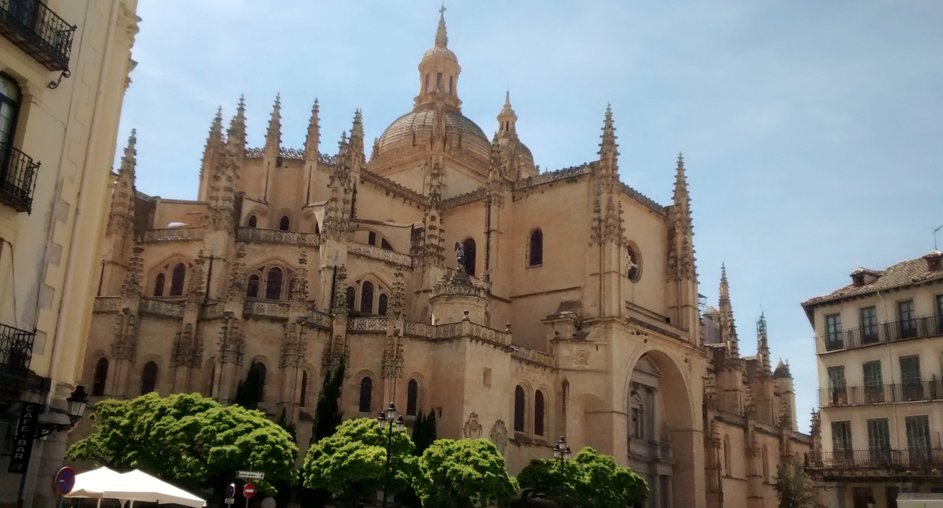 It is possible to follow the route of the acqueduct through the town with the aid of markers in the road and you arrive at the Alcazar, passing the cathedral on the way.

The cathedral was apparently the last Gothic cathedral to be built in Spain.

It is claimed that the Alcazar was the inspiration for Walt Disney’s magic kingdom, or was it the palace in Cinderella. What do you think?

It dates back to the early 12th century and was one of the favourite residences of the kings of Castile. The building is structured around two courtyards and has two towers and you can climb the John 11 tower, for magnificent views of the town and its walls and the surrounding countryside.

In 1862 a massive fire ravaged the palace and in the subsequent restorations  the architects  chose to exaggerate all aspects of the castle - creating more fanciful turrets and larger, spiralling towers enhancing its fairy tale image. 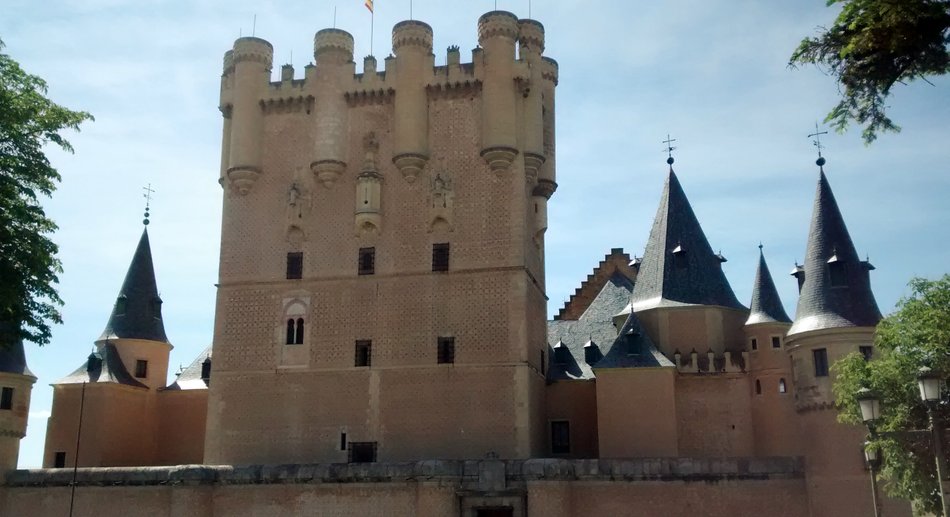 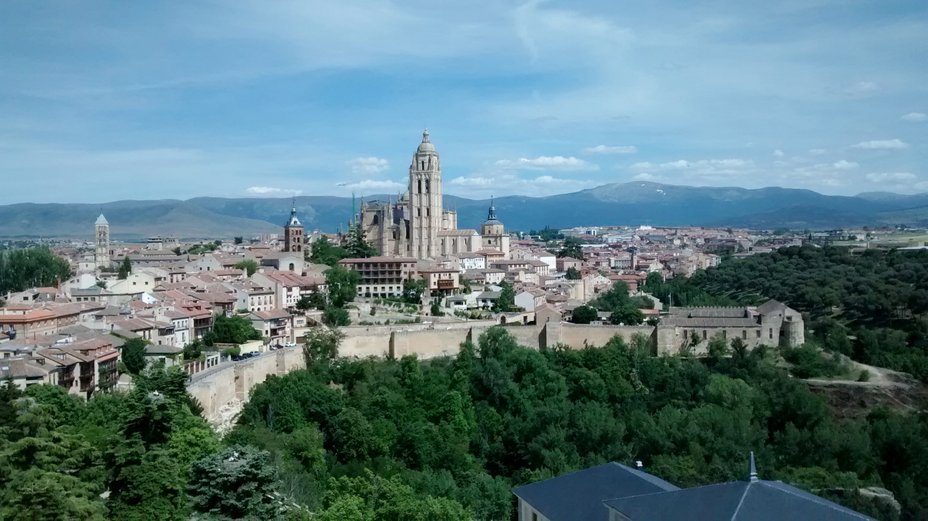 The cathedral as seen from John11 tower in the Alcazar & below, the surrounding countryside. 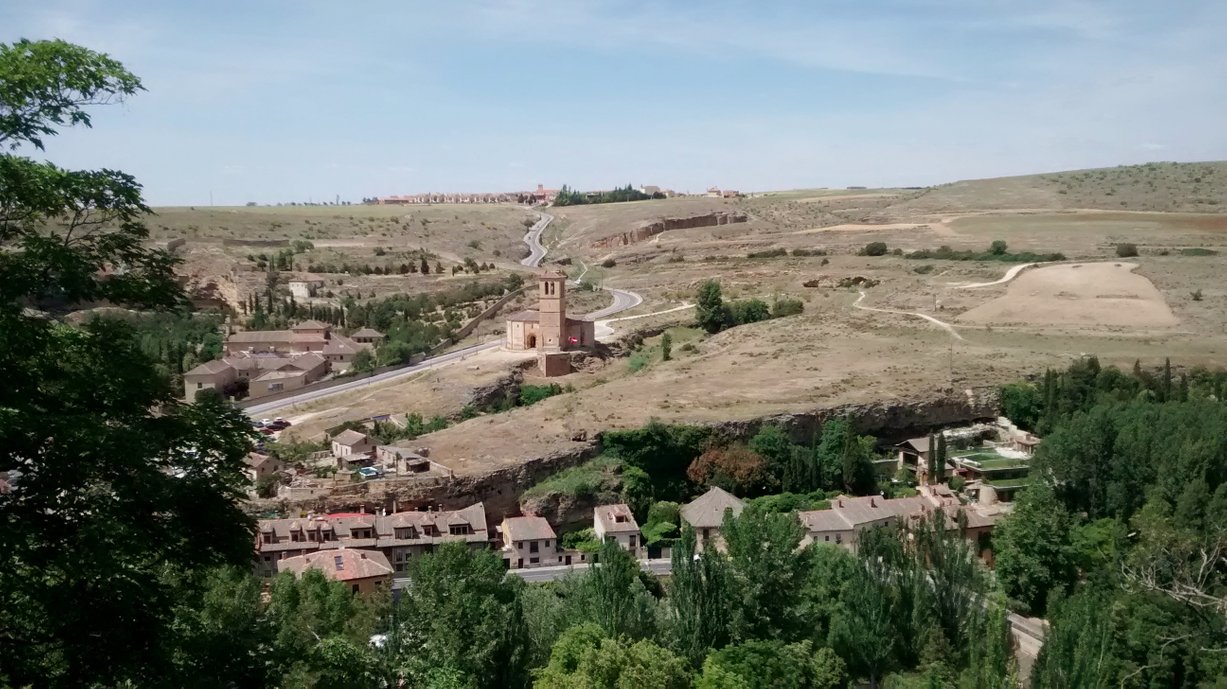 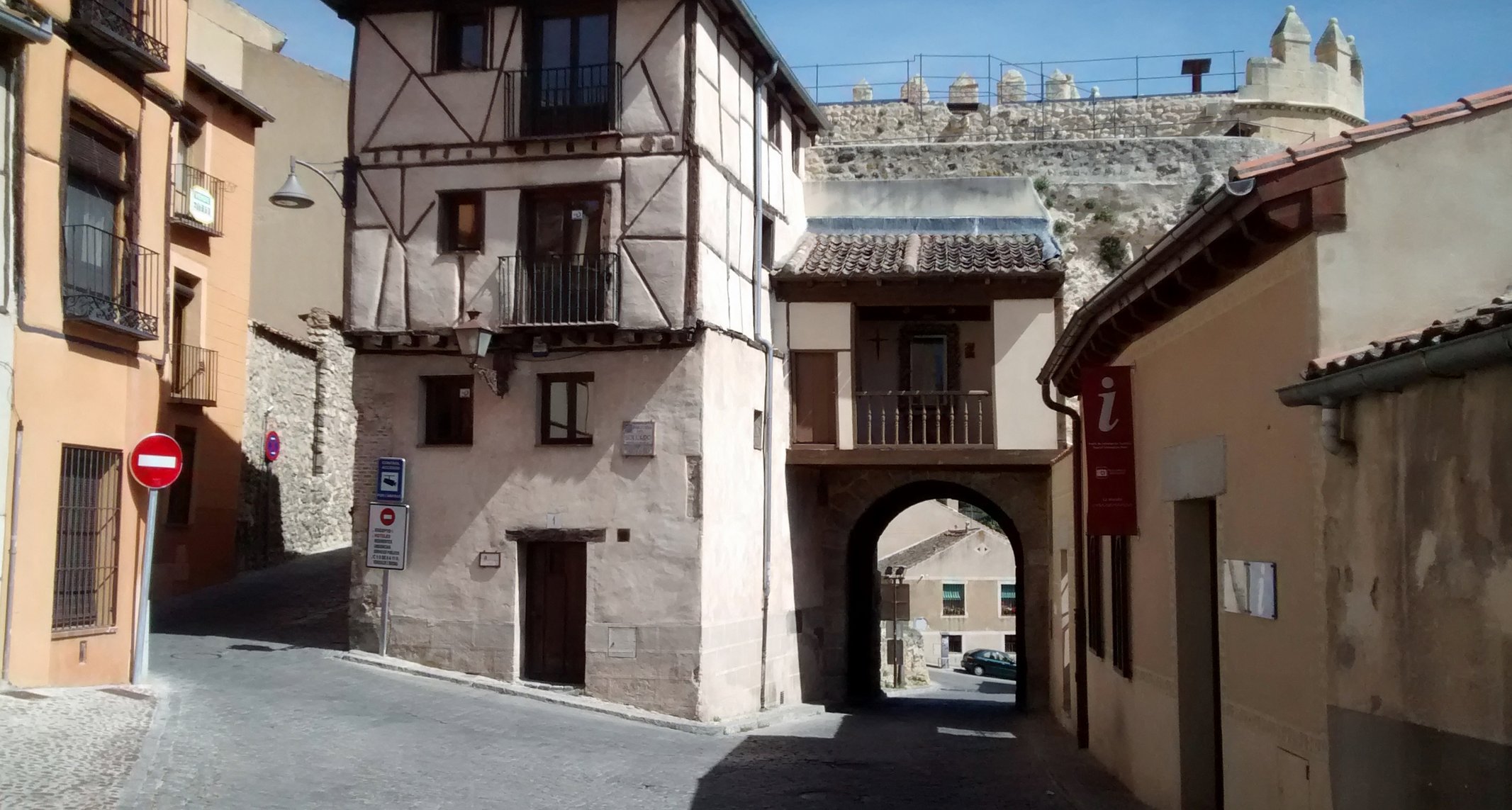 You can wind your way back to the aqueduct via the church of San Martin and the Casa de Los Picos, a mansion whose façade is adorned with diamond shaped stones. 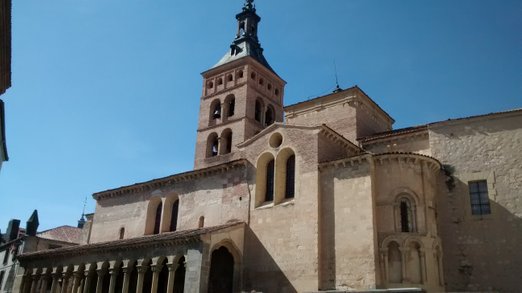 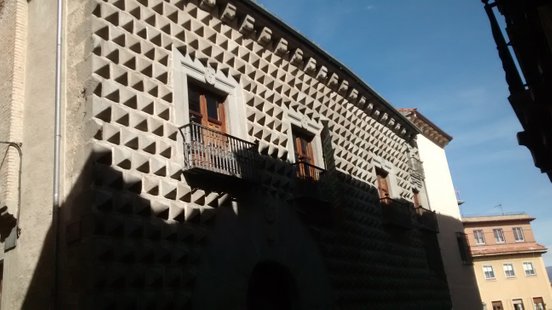 The advantage of taking the mountain pass to Segovia is that we discovered La Granja in the town of San Ildefonso and it is an easy cycle from the campsite, basically level and the majority is on a cycle track at the side of the road. The round trip is about 12 miles.

The palace was formerly the summer residence of the Kings of Spain  The palace is in a restrained baroque style surrounded by extensive gardens  and sculptural fountains, resembling a mini Versailles, which is not surprising as Philip V of  Spain who built it was the grandson of  Louis XIV of France who was responsible for Versailles.

It is not as grand as Versailles and the vast majority of the fountains are not working but you can see similarities and it is still impressive. The painted ceilings in some of the rooms are particularly impressive along with the magnificent chandeliers, restored after a fire in 1918, which caused considerable damage. 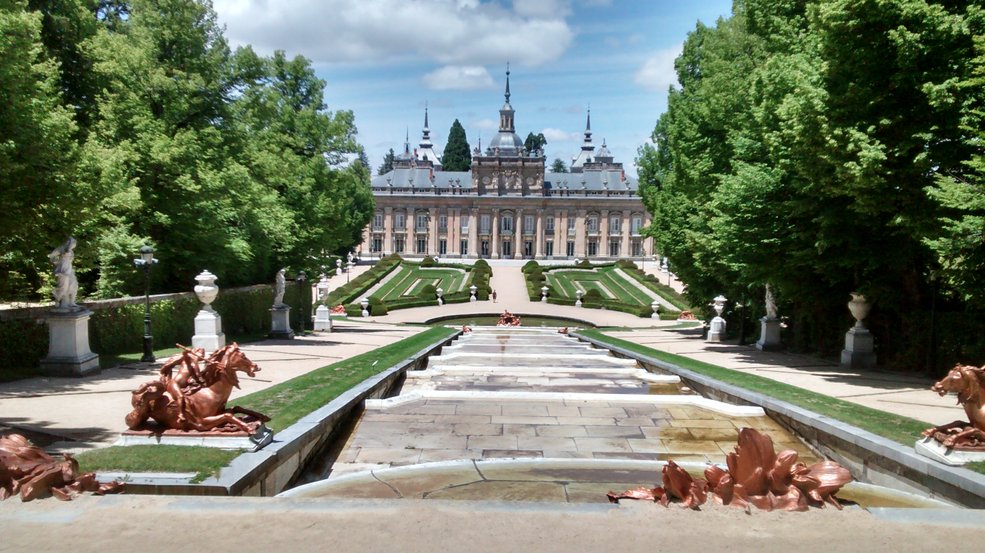 After our visit we had a slight panic. We had to lock our bikes in the park below the palace and on our return the lock keys were not in the bike panniers, so visions of a long walk to Segovia loomed. A return to the palace and with much gesticulations I asked security if I had left my keys whilst going through security but to no avail. Just as I was leaving the cashier in the kiosk proudly held up my keys and I must confess I was mightily relieved. Future contingency plans are now in place & Julia has a spare,along with the other motor home keys.

After a picnic in the park at the front of the house we decided to cycle to the neighbouring palace of Rio Frio. This turned into a bit of a trial as it proved to be quite elusive but we were now on a mission and when we reached the gatehouse we were allowed to cycle through the deer park surrounding the house.

On arrival we expected to visit the palace on a self guided tour but it is only possible to visit on a guided tour in Spanish but the guide was superb, keeping us informed in English with snippets of information. Our tour party were really appreciative of the fact that we had visited and all wished us adios when we left, as we had decided not to visit the hunting museum on the site.

After the death of  her husband Philip V, Queen Isabella Farnese lived in La Granja but acquired the property known as Coto de Riofrío and began building a new Royal Estate.

The interior is not as impressive as La Granja and the  architecture  is Italian, and is dominated by two main staircases, identical and symmetrical, and  consequently impressive. 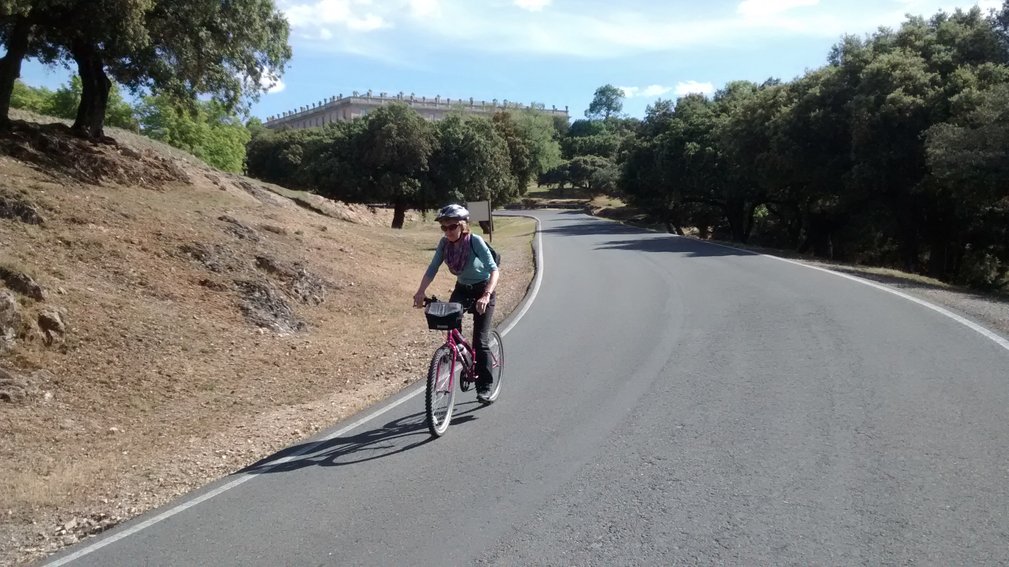 Cycling back to Segovia from the palace of Rio Frio.

(The total cycle route was 28 miles)

To a well earned coffee with the backdrop of the aqueduct and to cycle back to the campsite following the aqueduct was truly magical. 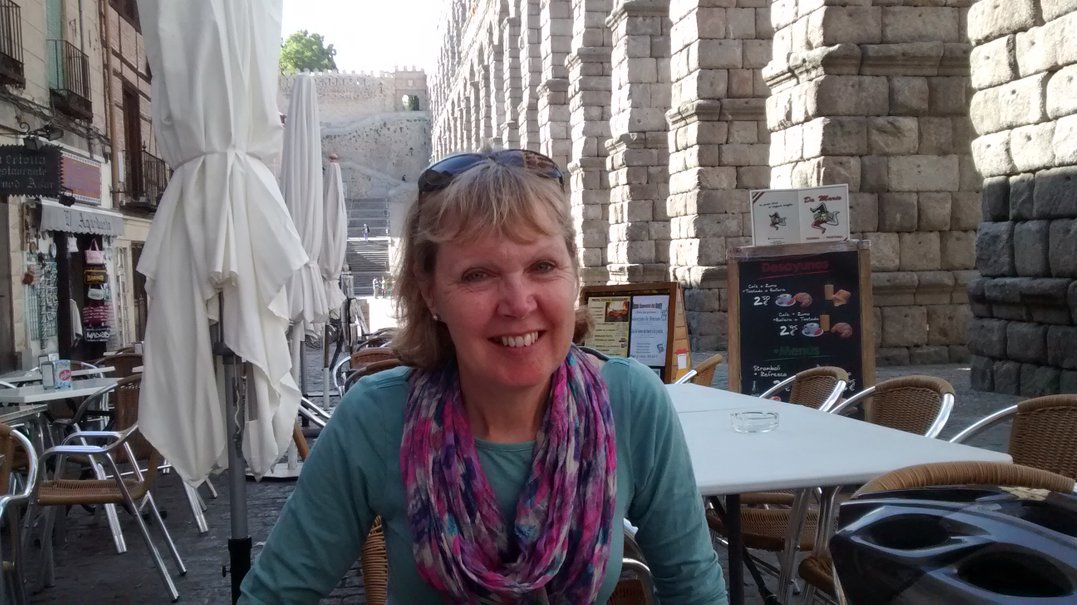