Despite numerous trips down the A28 this stopover has eluded us and the ACSI campsite Sainte  Claire is a gem, being only a few miles from the motorway.  It is a very pretty site with good facilities, including a motor service point and is on the banks of a river. It is a very busy  site and appears to be mainly used for stopovers, being conveniently positioned for Dieppe and only two hours from Calais, even less if you use the toll road. Consequently the owner understandably asks you to arrive at the site after 1.00pm. Attached to the site is a motorhome aire, accessed by credit card with spacious pitches, separated by hedges but only saves you about 3€ on the full facility site.

The entry road to the site, after leaving the A28 is a little off putting, as you proceed through a commercial area and past a sewage works but stick with it and the reward will arrive. Also as a plus, within walking distance of the site are a Lidl and Le Clerque supermarkets to stock up on any supplies you may need for your trip. The local cheese, sharing the name of the town, is to die for.

The other big plus is the Avenue Verte cycle route which literally passes outside of the site and this forms part of the long distance cycle route, London to Paris. We are not suggesting that you tackle the whole of the route, though we did meet a young man who was cycling from Hull to Paris and on only his second visit ever to France. The advantage of the section that passes the campsite is that it follows an old railway , so is off-road, passing through some very gentle Normandy countryside. Going south you can go to Forges Les Eaux which is about a 40km round trip and north to Saint Aubin le Cauf , which is about 56 km round trip. We stayed for a couple of nights and rode the southbound section. It is a very easy ride gently uphill on the way there and as you approach Forge there are some up and down sections but nothing too challenging.

We know the French are good with their cycle routes but to find a shelter with toilets for cyclists has to be a first and to witness them cutting the verges on the cycle route shows how seriously this nation takes its cycling. 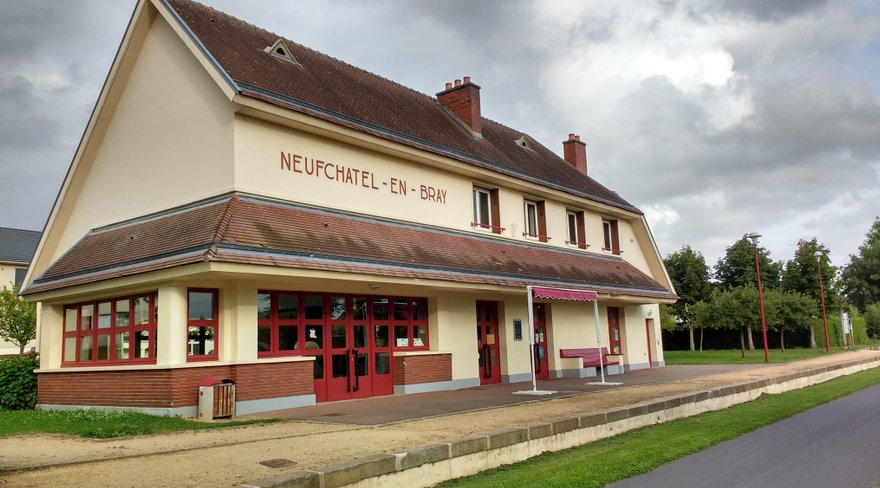