I have used this site a number of times and have never  been disappointed.

It is only a short walk from historical Canterbury and there is also an excellent bus service.

This follows the old railway line from Canterbury to Whitstable, which was opened  in 1830 and was the world’s 3rd oldest passenger railway.

The start of the cycle way  is near Canterbury West railway station  and it is signposted or alternatively head towards Kent University and pick it up here.

Though you have to get out of Canterbury, a large part of this is possible on cycle routes or quiet roads.

From the site you have to turn left down the main road and though this road is fairly busy, we have never found it a problem.

At the bottom by St Augustine’s abbey at the roundabout  go directly into the town.

Just before the abbey on the RHS is the truly beautiful church of St Martin’s ,the oldest  church in the UK, dating back to the 6th Century and prior to that, as there is evidence of  a Roman building. It was built for Bertha, a Frankish princess, the wife of King Athelberht of Kent,to allow her to continue her religion. It is not open all the time, it is manned by volunteers.

When you get to Whitstable make a mental not when you go under the mainline railway so you do not miss it on the way back.

At Whitstable treat yourself to either traditional fish and chips or try the oysters, there are plenty of options.

A great extension of this ride is to take the road out of Whitstable and then take the Tankerton promenade and follow the coast all the way to Herne Hill. (It is possible to continue along the coast to Reculver, Broadstairs, Ramsgate,connecting up with the Viking Way.)

The Tankerton promenade at the bottom of the cliffs is now an official cycleway though we confess, we were one of those that cycled along it before it received its stamp of approval.

It is a very wide promenade and as long as one cycle with discretion and courtesy for other users we do not see a problem though to be fair we have not experienced it in peak periods. 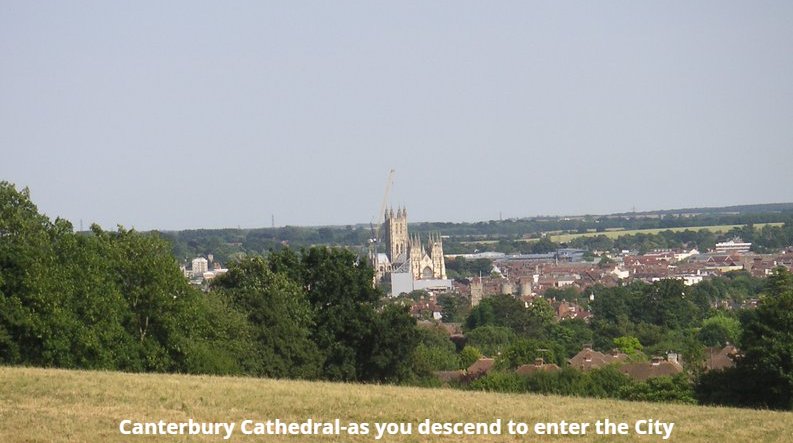 An alternative is to explore the surrounding countryside and villages by using the Cathedral to Coast circular route, using the regional routes 16 & 17.

This follows quiet roads and is  a great way of exploring Kent but be warned that if you do the full circuit, the section at Dover is steep.

To pick up the route from the campsite, turn right on the minor road immediately outside of the campsite and then continue until you reach a T junction and then turn right over the railway bridge.