The canal runs from Migennes in the north which is our ultimate goal,where it joins the Yonne and ultimately leads into the Atlantic, to the south at St Jean de Losne, where it joins the Saone and eventually the Mediterranean.

Just south of the town of Pouilly en Auxois it disappears into a tunnel over 3km long before it heads towards Dijon.

We picked up the canal, north of Pouilly en Auxois at

After leaving the Roman town of Autun, we headed back north via the Burgundy Canal, with the aim of tracing it to its starting point at Migennes. Following the Roman theme our first stop was at Venarey Les Laumes,adjacent to Alise Sainte Reine which is below Mount Auxois and the alleged site of the battle of Alesia.

In 52BC Julius Caesar with the aid of elaborate encircling fortifications besieged a Gaul army, under the celebrated Vercingetorix ,four times larger than his own. The end result, amidst much brutality, as is common with the Roman army is that the Gauls came second. Vercingetorix surrendered not before evicting his women and children who became entrapped between the two armies and were left to starve. Vercingetorix was taken back to Rome, paraded as the defefeated enemy before being executed 5 years later.

There is a museum which also displays an example of the considerable formidable fortifications but there is a snag. There is some dispute whether this is the actual site of the battle, there is a challenger, Chaux des Crotenay in the Jura and amidst the competing claims, there are accusations of skulduggery and the fact that the French have spent a lot of money on the museum, has nothing to do with the fact that Alise has the support of the authorities, as the official site, ever since Napoleon 3rd in 1860 who commissioned a massive statue of Vercingetorix.

You can easily cycle to the museum. The town has a large supermarket for supplies.

Further details of the competing claims can be found at:

Anyway our main aim was to cycle the canal and chill out. We stayed at the excellent, appropriately named Camping Municipal Alesia which was a pleasant site with spacious pitches and many surrounded by hedges. It was very clean and as normal very reasonably priced at 15euros with EHU

There is an aire just behind the campsite

The canal is a very short ride from the site and in one direction south to Pouilly en Auxois. It is well surfaced and is a steady climb and we passed 45 locks in about 15 miles. No problem for boat owners here, not that there were many, as the locks are operated by lock keepers who beetle up and down the towpath on their mopeds covering the locks that they are responsible for. Many lock keepers also appear to compete with each other to see who has either the best gardens or in some cases the most bizarre. 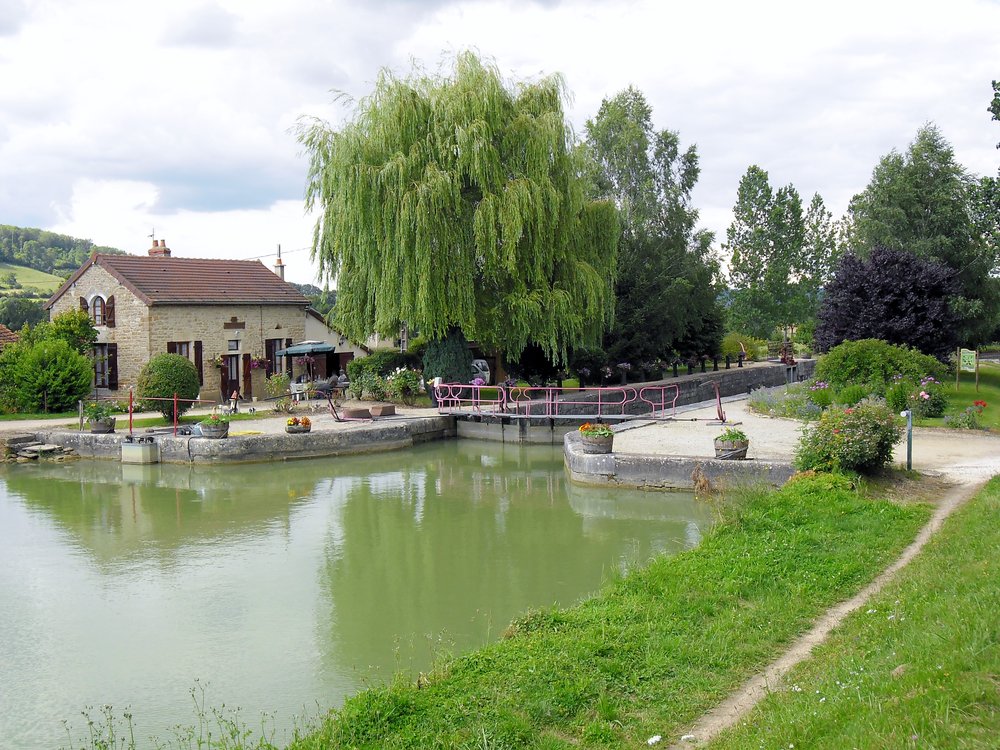 In the other direction you can head towards Montbard which is about 8 miles until you come across the port area. The good news going in this direction is that there are very few locks. Once you get to Montbard make the visit to the town and the climb to the chateau and church, not only will you be rewarded with spectacular views and a very tranquil spot, it is great coming down.

Montbard is big enough for lunch etc if you do not want to take a picnic which would be a shame as there are some great picnic spots at the port and in the high town. 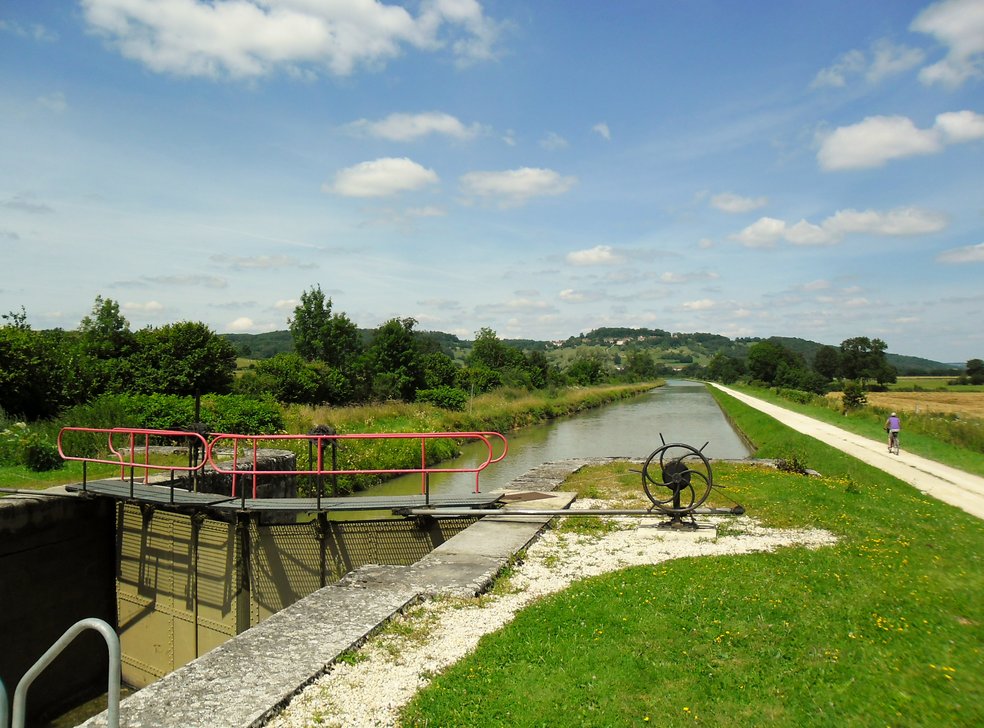 Heading towards Montbard, the tow path here is of excellent quality. 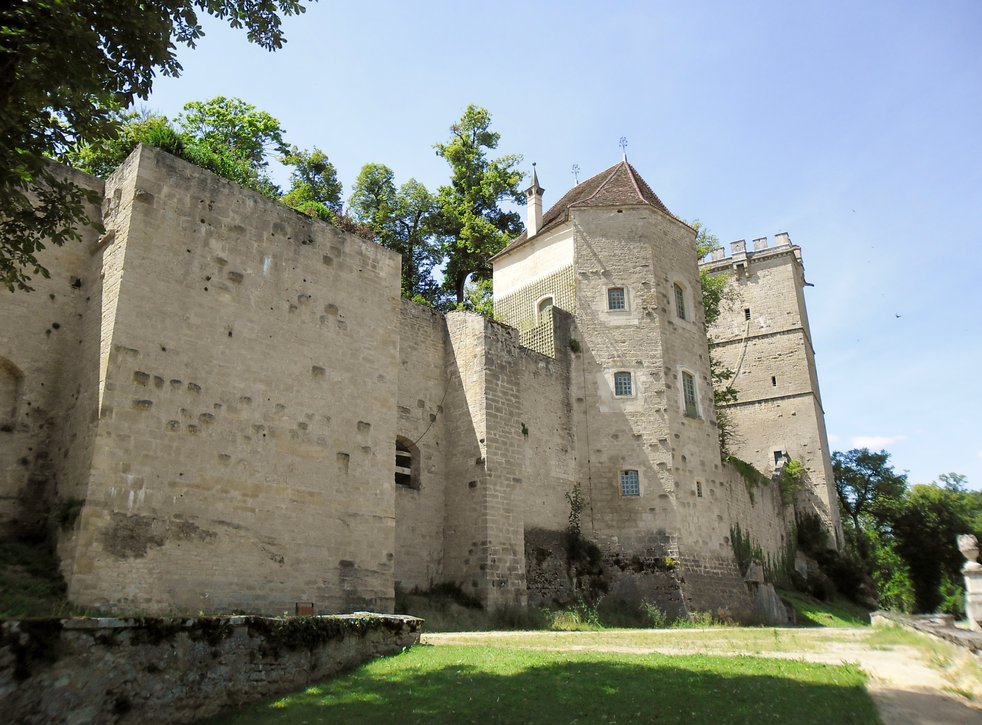 The chateau at Montbard

Oh what a find, this site was absolutely superb. It is a municipal site based on an old restored mill and though the large locked gates,initially were a little offputting in the sense that they are rather imposing, you can not say security is not good. The sanitary facilities are modern and spotlessly clean and it has an easily accessible motorhome service point.It is an open site for about 40 with water and EHU on the pitches. The warden was extremely friendly. The site is used by all nationalities and is popular with the French who fish from the nearby river. All this for 10 euros a night and free wi fi.

The village is attractive without being pretty pretty and has a baker, a charcuterie/convenience store and a restaurant and is only a few hundred metres from the canal.

In one direction you can cycle towards Ancy Le Franc, about 15 miles round trip, which has a very attractive 16th century chateau. You do need to divert from the canal to get to the town but it is hardly a kilometre.

We had planned to stay at Ancy Le Franc, but could not find the campsite on the way through but subsequently found it when we cycled from the canal to the town. It is a pleasant location but pretty basic and also there was a height barrier, which apparently gets lifted between 6 and 8 in the evening,what happens in the morning, so visions of gettting trapped in the site and anyway Lezinnes knocks the spots of it.

Just pointing out my house at Ancy, these period properties are a devil to maintain & heat 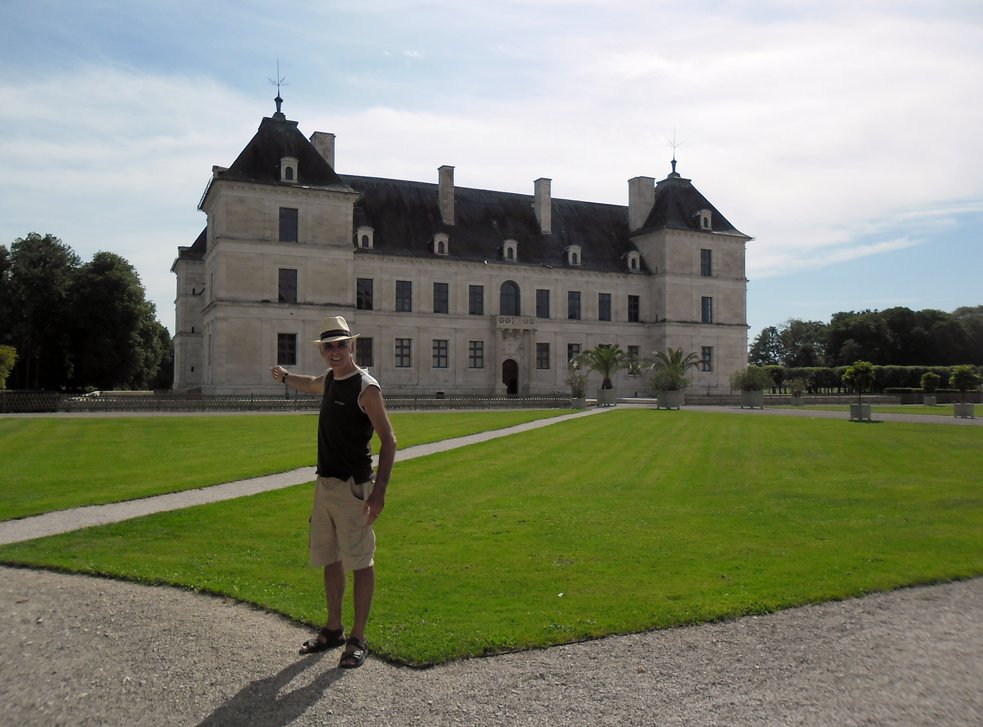 In the other direction, about the same distance you come to Tanlay, there is a small attractive port area and near the roadbridge a bar where you can while away the time and enjoy views of the canal.

A short cycle into the village takes you to another chateau. 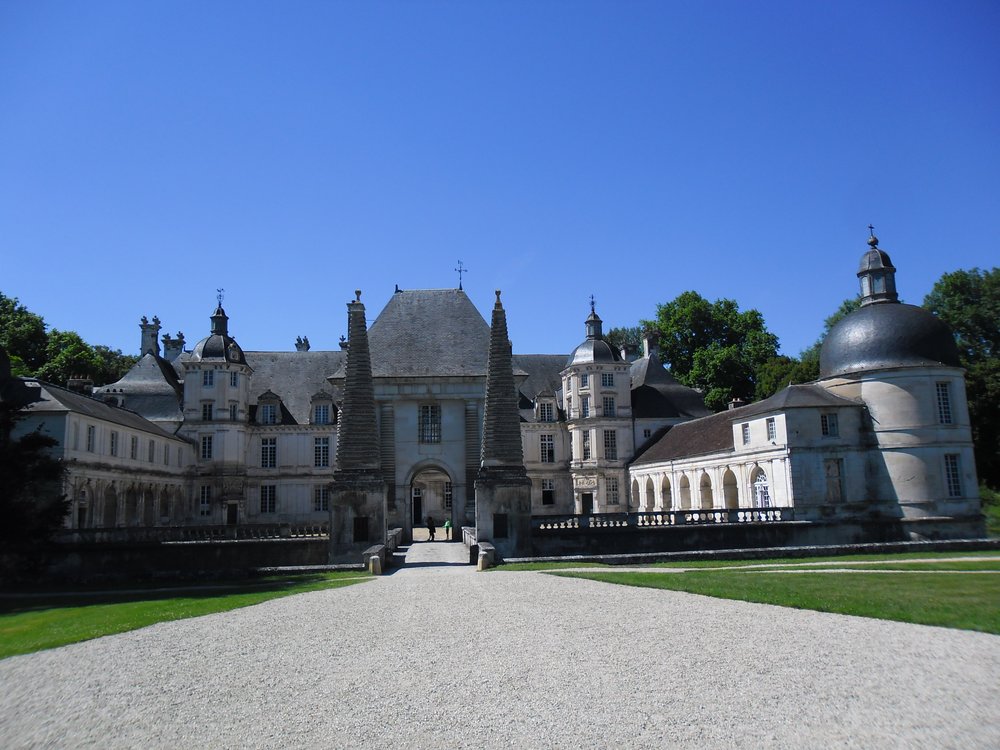 I mentioned earlier that some of the lock keepers vie for the priviledge of the most attactive or bizarre garden. There is probably not a lot more bizarre than this one. 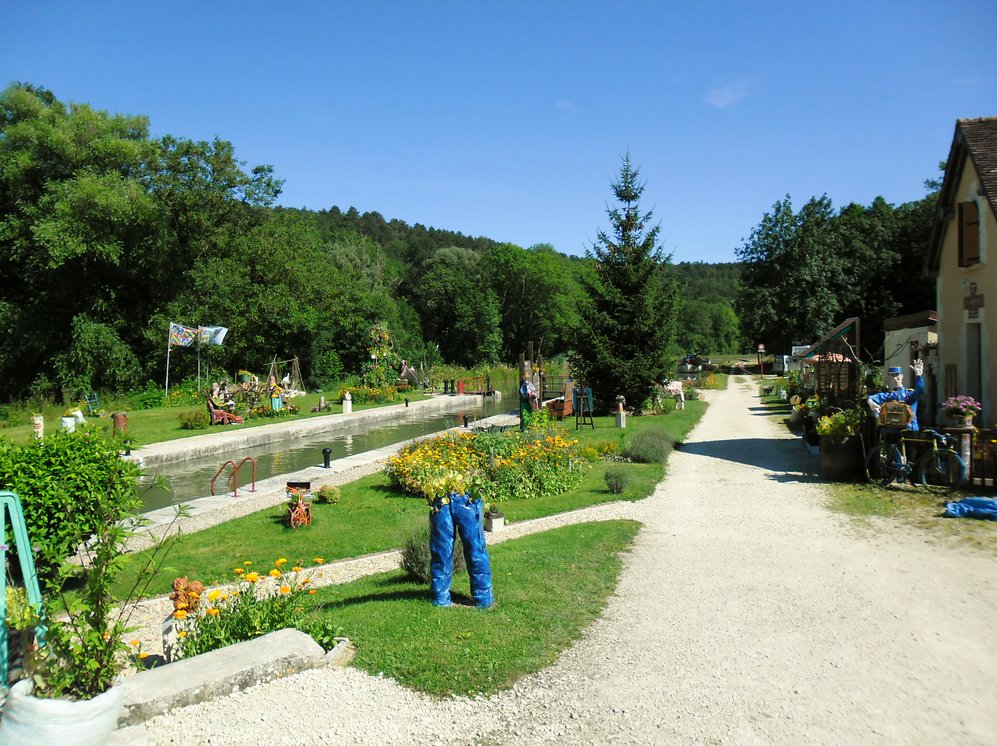 That is only one view 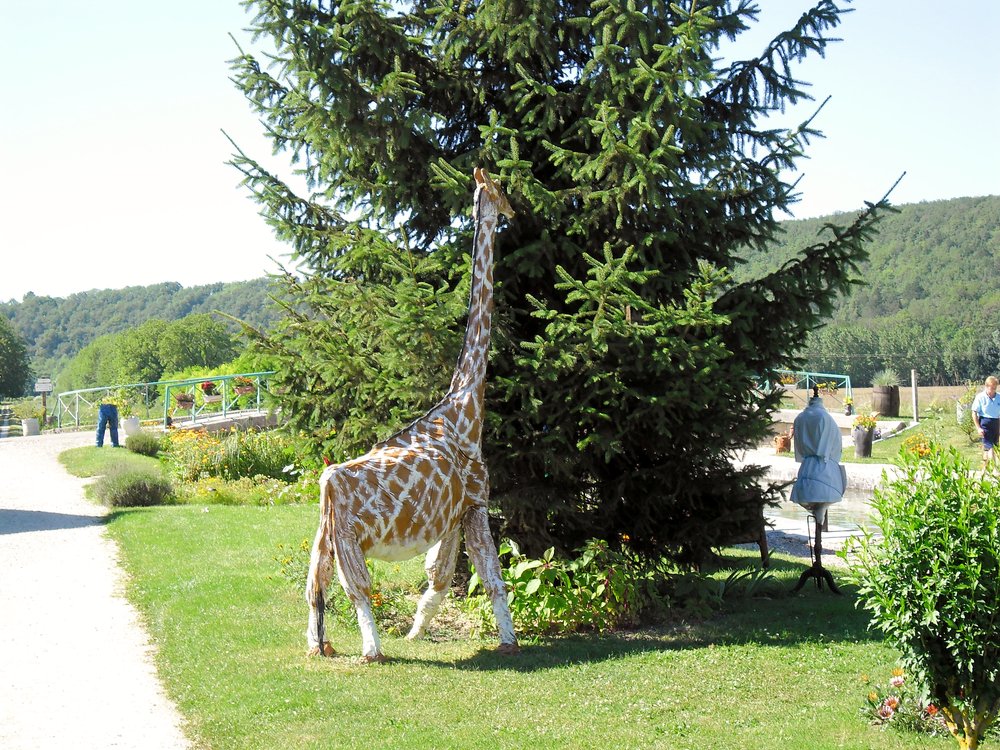 The beauty of motorhoming is that within a matter of minutes you can be packed away and on your way and when doing a cycle route you can be at your next destination in next to no time, set up and ready to go in the time it takes to shake a lamb's tail.

Our next stop was the town of Tonnerre and an excellent municipal site, located between the river Armancon and the canal and at 18 euros a night, with EHU, was reasonable, given its superb location.

It is worth visiting the town of Tonnerre and an afternoon visit will do the trick. You simply turn left out of the site and head upwards, aiming for the church which is massive. It is a good idea to walk under the underpass rather than cycling it.

The first site you come to is the 'Hotel Dieu', which also doubles up as the tourist office. It was a medieval hospital constructed in the 13th century and at the time it was the largest hospital in France and you will fail to be impressed by its spacious interior. 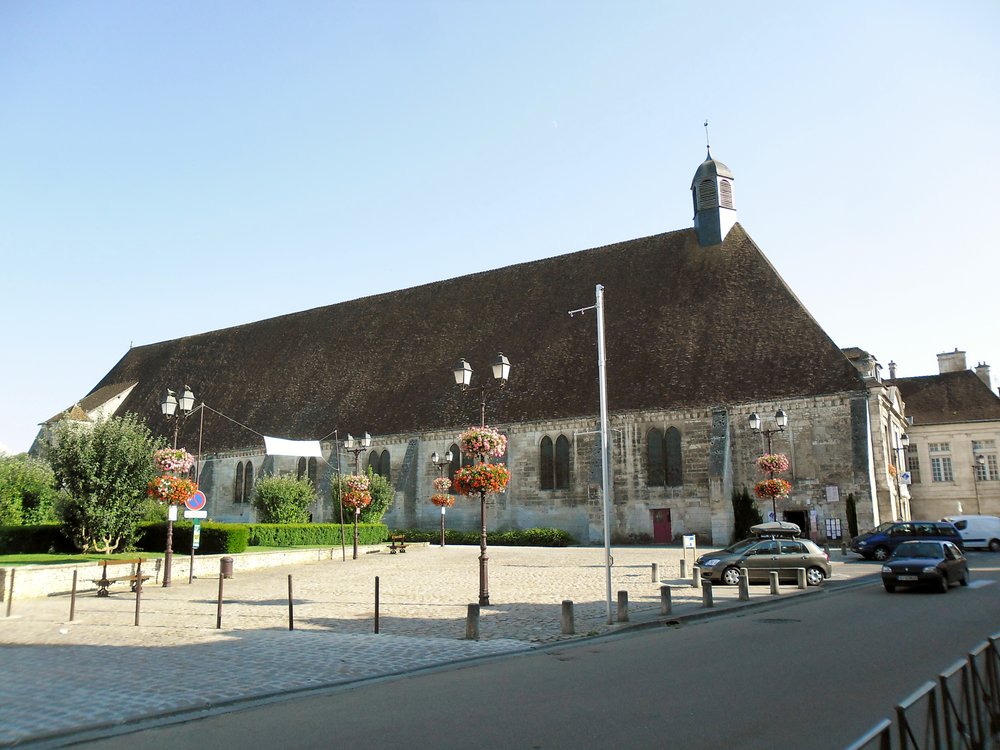 A short walk away, is the most celebrated site, 'The Fosse Dionne' which is a natural water source, producing some 200 litres per second. 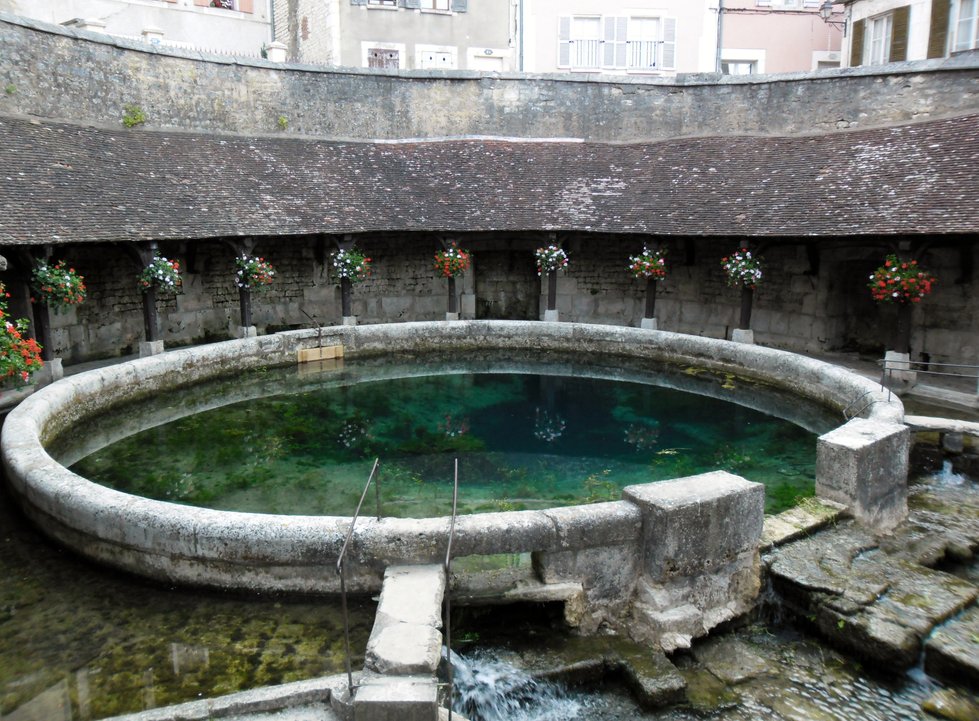 From here there runs a 2000 year old track up the side of the hill which leads to St Pierre's church, the impressive building which you can see from the canal. Evidently this track was used by the Romans, to get their water, when they has a settlement on top of the hill. You will need to leave your bikes locked up by the Fosse. 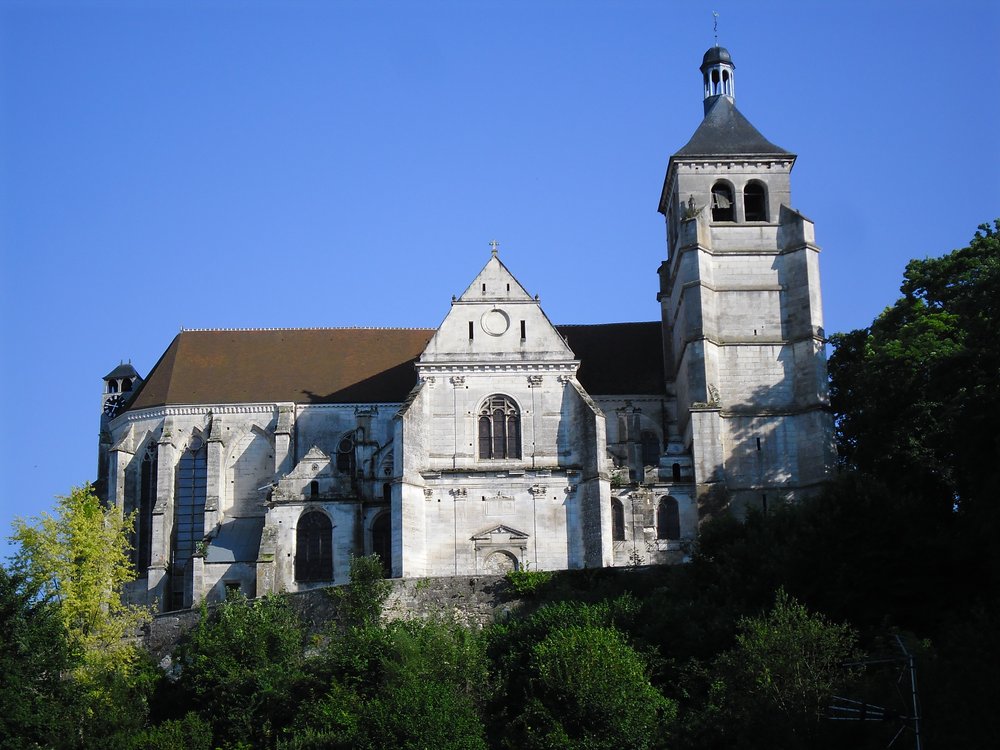 Coming back to the canal, northwards you can go in the direction of Flogny La Chapelle and southwards back towards Tanlay. We chose to go northwards. The canal follows the valley of the Armancon until you reach Migennes and there are appropriate points, as below,where you can pick up the beauty of the river and incidentally a number of river swimming points. 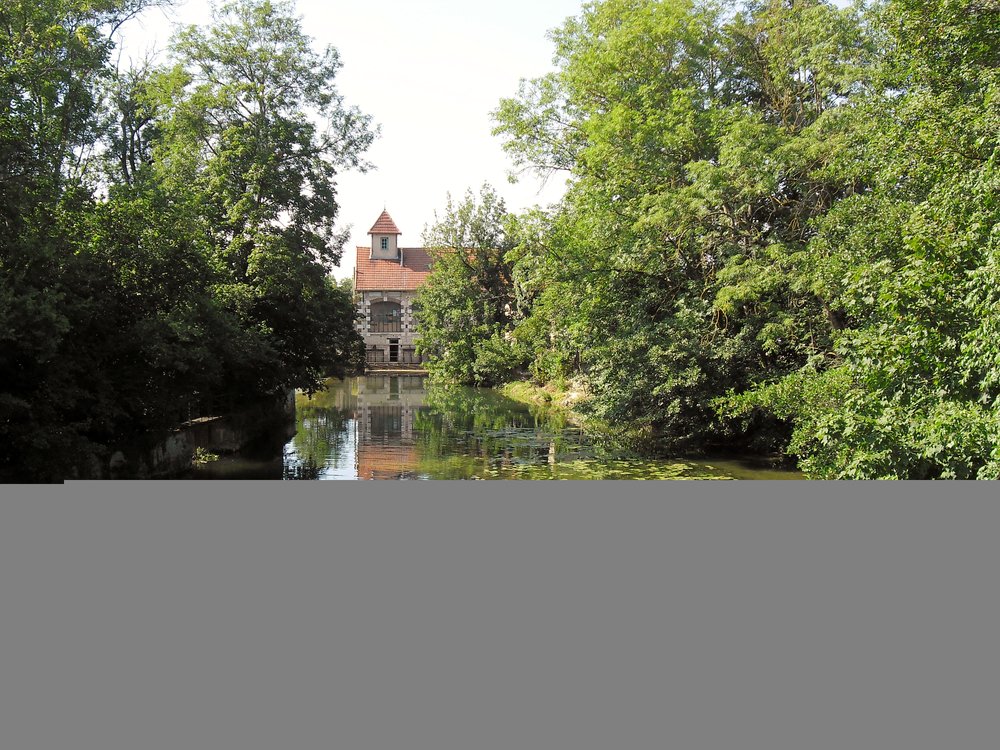 Our next port of call was the municipal site at St Florentin, here we had to get the help of the campsite at Tonnerre to get its location.It is easy to find, as you come into the town,take the N77 to Auxerrre and you cross the bridge and the campsite entrance is on your right. You then go under the bridge to the campsite, as you are not allowed to turn left.

It is a 2 star site, very reasonably priced at 12 euros a night with EHU. It has a mixture of facilities, some old and some new but spotlessly clean. It also has a motorhome service point, a small bar and they will get your bread etc for you. There is river swimming next to the site.

The pitches are very spacious and it was uncrowded.

The town itself is pleasant enough and has an old priory and is definitely worth a visit and the most atractive entrance and exit is via the old port.

For motorhomers it is acceptable to stay overnight at the various port locations alongside the canal. 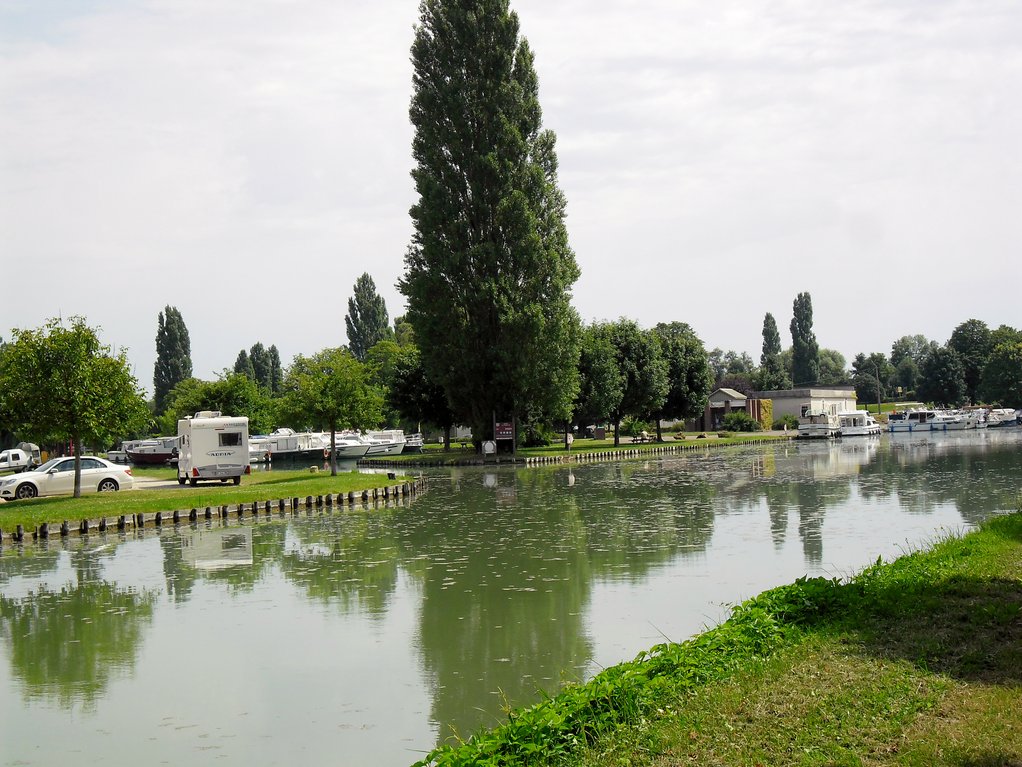 The town as viewed from the canal

Northwards along the canal you reach

Here the canal ends and joins the river Yonne.

Below is the port basin before the locks to the Yonne. 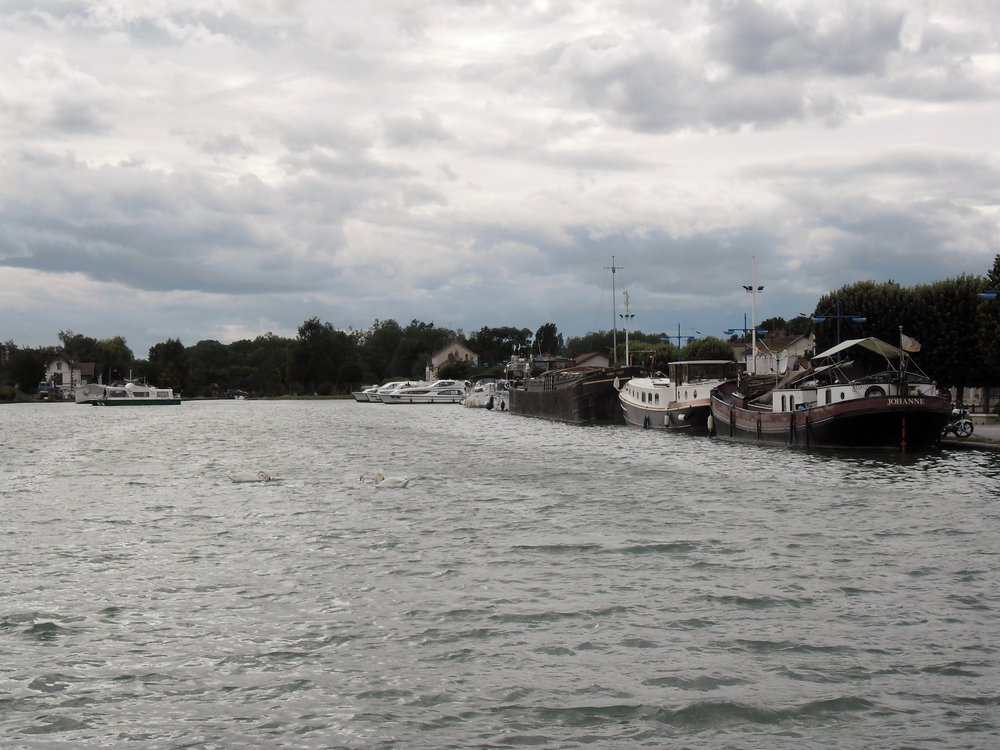 Migennes itself is not a particularly attractive town and the towpath here is more track like.

A better overnight stay would be at the superb municipal site at Joigny and the town of Joigny is much more attractive.

See my blog 'Motorhome Travel Blog' on this website