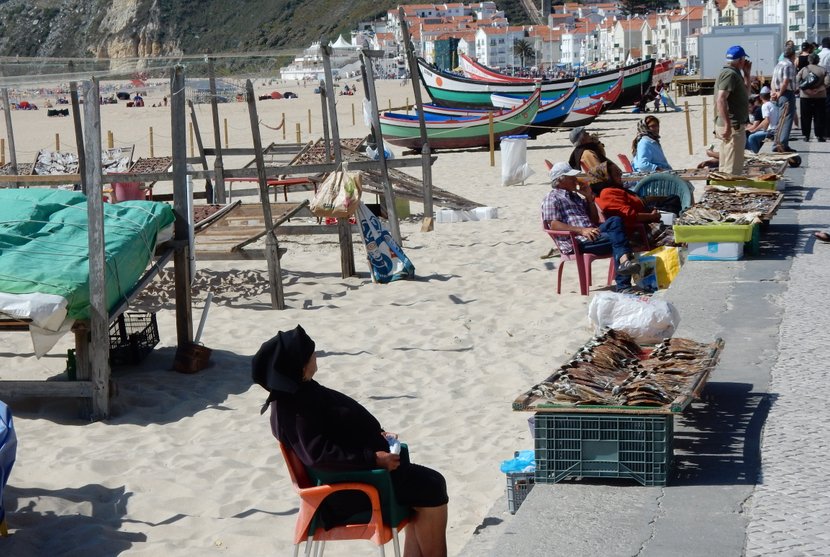 The town nearest to the funicular railway, still retains its charm with its narrow streets, leading up from the seafront and you will still see, mainly elderly women, in more traditional outfits, whiling away their time in the street cafes.

The rest of the town has somewhat sprawled outwards and there is a motor home aire in this part of the town and the best of luck getting in there as this resembles one of the worst aspects of aires as it becomes transformed into a municipal carpark.

Above the town is the village of Sitio, dominated by its very attractive square and equally attractive church which acts as the centrepiece. As with many churches its existence is based on relics or legends and this one is no exception but  Nazaré is not content with one legend it has to have two.

The first relates to the derivation of the name of the town , which apparently is due to a small wooden statue of the Virgin Mary, a Black Madonna, brought initially in the 4th century to Merida in Spain, by a monk from Nazareth in the Holy Land. Another monk, in 711, accompanied by the last Visigoth king, then brought the same statue to Nazaré, where they became hermits. The king then buried the monk in the grotto where he lived  and placed the Black Madonna on an altar.

The story does not end there though as Nazaré is not content as most towns would be with one legend.

The first church was built in Sitio over the grotto as a result of an intervention in the 12th century by the Virgin Mary, who saved the life of a Portuguese Knight, who was hunting in dense fog . So in memory of the miracle we have the first church built, which bears no resemblance to the current church, started in the late 14th century but totally modified between the 16th and 19th centuries, to give the current splendid  baroque building, together with its statue of  our Lady of Nazaré.

In the square you will find locals selling their wares from portable stalls and it is here that you will find the stallholders, dressed in their traditional costumes for the benefit of the hordes of tourists that come in by bus. 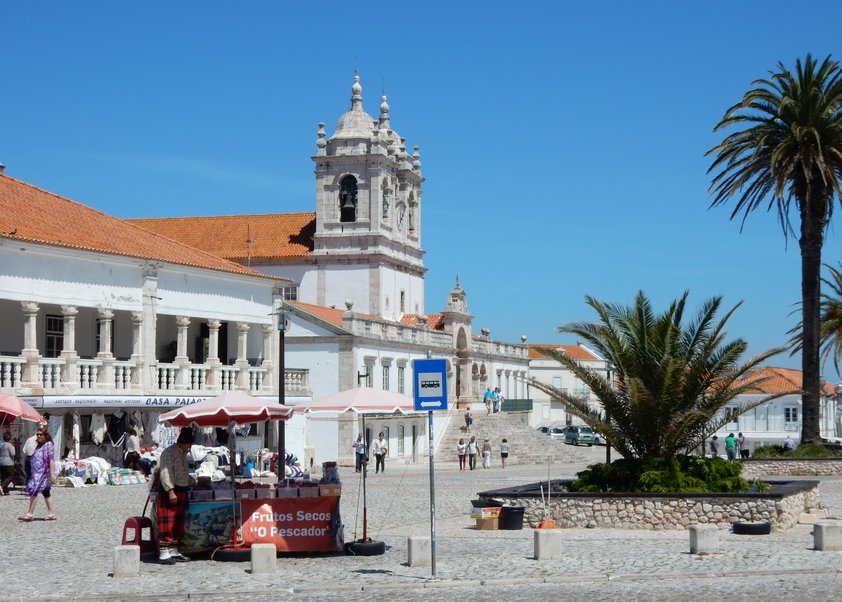 A short walk from the square, downhill, takes you to the lighthouse and its magnificent sees and reference to the 100 foot gigantic wave that hit this coast in 2013 and the record surfer. (see attached reference) 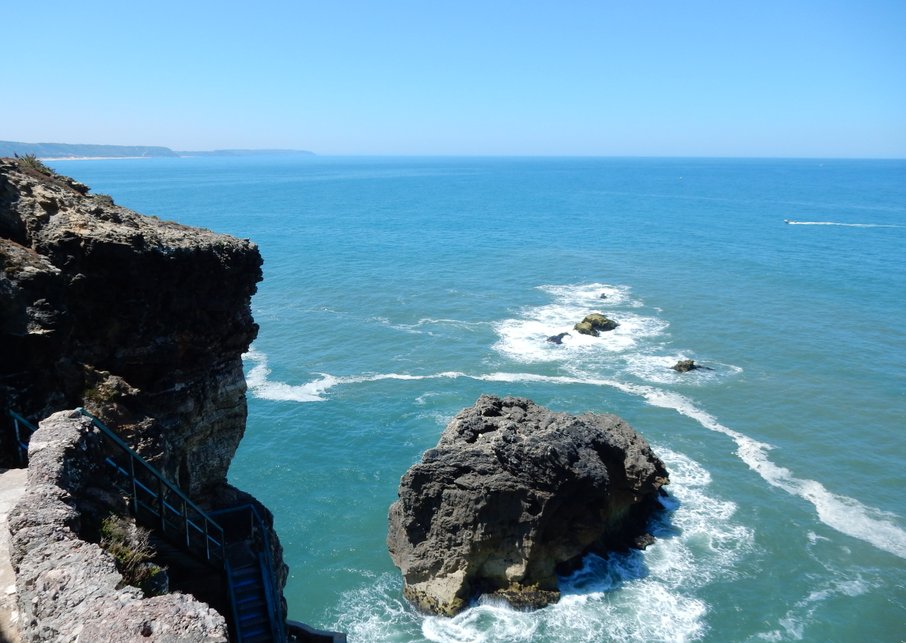 Back to the square and did I mention that you get spectacular views of  Nazaré and its splendid beaches and you can easily see why it is such a popular tourist spot..

Cycle Ride: There is a very pleasant cycle ride from Sitio to Paredes Velhas, about 14km each way along the route Atlantica and though you do not experience sea views until the end, it is nevertheless a pleasant level ride (until the end) along a cycle path, which follows a very quiet road.

We stayed at Campsite Val Paraiso Natur Park, an ACSI site, which is about 2km reasonably flat walk to Sitio, where you can then take the cliff railway down to Nazaré and it is a similar distance then back to the site,

This is an excellent site, set on tiered levels in a pine forest, though the sound and possible damage, caused by falling pine cones, from not an inconsiderable height, as witnessed, crashing down on a Dutch VW camper made me very nervous, as I moved to a pitch away from these potential missiles.

The sanitary facilities are superb, there is a spacious motor home service point and a swimming pool, onsite restaurant and shop and all for the princely sum of 16 euros, cash only for short stays. This easily beats staying on the aire in the centre of town.

There is a good supermarket within 500 metres, on the way to Sitio.

After the visit to Coimbra and Conimbriga it was time to take the motor home  to the celebrated coastal resort of  Nazaré.

It is considered to be one  of the most attractive and traditional fishing villages in Portugal but our visit at the weekend , amply displayed that this village has been transformed by tourism. It was busy in mid May  at the weekend, heaven forbids what it would look like in August.

You can see ,however, why this town is a popular tourist destination, it has a wide sweeping bay  with a superb beach. This also brings its downside, the crowds and overpriced restaurants and tourist tat. Though the traditional fishing boats on the beaches are now museum pieces, there  were still remnants of traditional activity, as dried fish was laid out and sold at the seafront. Fishing is still an important activity but undoubtedly it is tourism which predominates.