There are a number of sites which offer the opportunity to cycle off road directly from the campsite; Delamere Forest is a prime example where you can spend a happy hour cycling through the woods.

One of the best, however, has to be Teversal  where you literally cross the road outside of the site and you enter the country park where  you can warm up and cycle the two circular paths, albeit that there are some inclines to negotiate, but nothing too serious.

A visit to the Teversal   visitor centre is well worth it to get an historical overview of this once extensive coal mining area and they also do some very good refreshments.

This is signposted but from the campsite, after crossing the road into the park you head right.

The land once of Blake’s historical satanic mills has now been restored  to  the green and pleasant land it once was.

It is difficult to imagine that this was once an extensive industrial area in living memory.

Today there is an extensive network of cycle tracks based on the old colliery railway lines with many parks such as Teversal,  Pleasley Pit Country Park  and Holmewood.

This picture of a miner with lamp was taken at sunset. The statue on the top of the hill In Silverhill country park opposite the site is a tribute to the industrial heritage of this area. 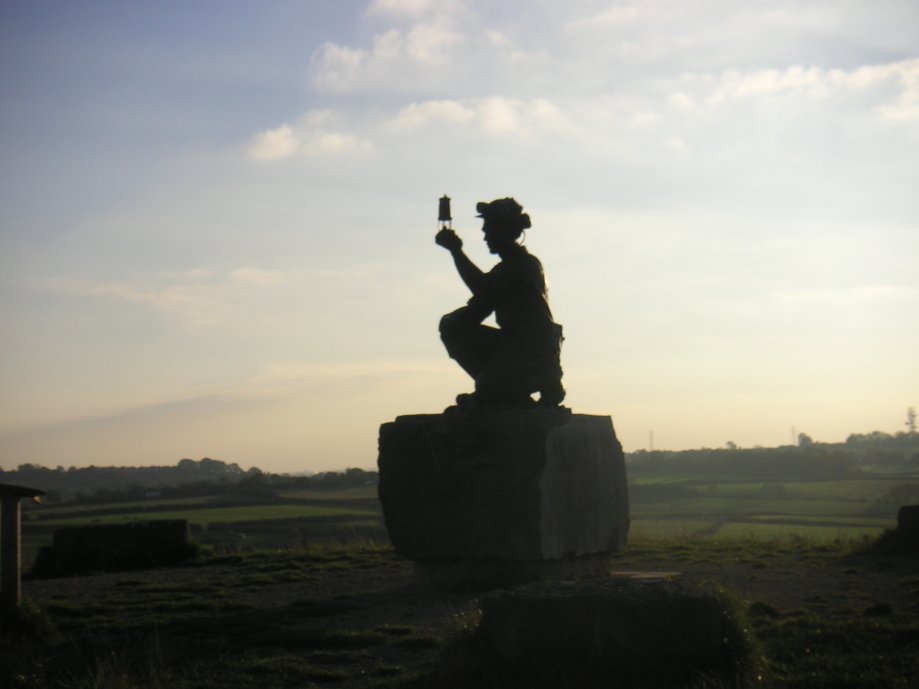 I do not intend to give extensive descriptions of the options, as you can pick up leaflets from the visitor centre and secondly it is impossible to get lost as the tracks are well   delineated. Though I understand that some of the tracks have been improved since I tackled these, they have been widened and the surfaces improved.

All routes start from the visitors centre

Take the Pleasley track (not via Skegby, you will return this way).

On your left, after just over a mile, before you get to Pleasley there is another old railway track which takes you into Rowthorne which is about a mile.

National Trust members can take the road to the left and then another on the left to the hall, which is about a mile down the road. It is probably possible to do a circular route, using the estate roads , but we have never done this so we take the 2 mile return, the same way we came.

You continue on the Pleasley track and after a shortwhile you reach the Pleasley  colliery , which amazingly is still intact and in the process of renovation.

You then come into the town and when you reach the main road, if you cross the road and go right you can follow the track, for about another mile.

On your return to Teversal you take the left hand  railway track and continue onto Skegby  and Ashfield which is about a couple of miles, before returning the same way back to the site.

It is possible, now, to extend your ride through Ashfield, Mansfield and to pick up the National Cycle Route 6, which will lead you into Sherwood Forest.

We have not done this yet so it is definitely on the agenda. It would form the basis of a separate day out.

It does go through urban areas, so care will have to be exercised when crossing main roads, but it  is a designated cycleway.

Back to the visitors centre and you pick up the Silverhill trail and just after about  a mile you  take  a 2 mile round trip detour   to   Brierley  Forest Park, the site of a former colliery and the memorial to the miners who lost their lives here and a reminder of how dangerous this business was.

There is a visitors centre here which is open all year round and refreshments are available.

You can then either take the trail or continue to explore the Silverhill trail, retracing your route to pick up the Five Pits trail on your return.

The Silverhill trail continues for about a mile before it reaches the main line so it is a 2 mile return trip to pick up the Five Pits trail again.

The trail follows the old  Great Central Railway, though there is precious little evidence left and it joins Tibshelf  Ponds to Grassmoor Country Park.

There is a circular detour which is well worth taking via Williamthorpe Ponds and Holmewood Woods.

Be warned there are some fairly step sections which puzzled me at first as trains do not go up hills, though there are some notable exceptions, such as the High Peak  Railway at Cromford Junction in the Peak District.

The explanation can be found on the many legend boards, which are on the route and explain how the landscape of the area has dramatically changed since the coal mining era, with for example viaducts disappearing, which  in the past would have evened out those dips.

There are various picnic spots on route.